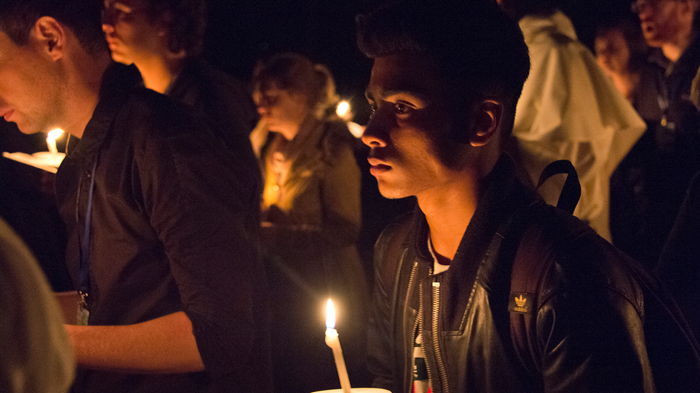 Suicide remains a taboo subject in many Protestant churches, despite the best efforts of pastors, according to a new study from LifeWay Research.

Eight in 10 Protestant senior pastors believe their church is equipped to intervene with someone who is threatening suicide.

Yet few people turn to the church for help before taking their own lives, according to their churchgoing friends and family. Only 4 percent of churchgoers who have lost a close friend or family member to suicide say church leaders were aware of their loved one’s struggles.

LifeWay Research found suicide often affects churches. Researchers surveyed 1,000 Protestant senior pastors and 1,000 Protestant and nondenominational churchgoers who attend services at least once a month, in a study sponsored by the American Association of Christian Counselors, Liberty University Graduate Counseling program, the Liberty University School of Medicine, and the Executive Committee of the Southern Baptist Convention.

LifeWay’s study found three-quarters (76 percent) of churchgoers say suicide is a problem that needs to be addressed in their community. About a third (32 percent) say a close acquaintance or family member has died by suicide.

Those churchgoers personally affected by suicide were asked questions about the most recent person they know who has died by suicide. Researchers found that 42 percent said they lost a family member, and 37 percent lost a friend. Others lost a coworker (6%), social acquaintance (5%), fellow church member (2%) or other loved one (8%).

About a third of these suicide victims (35%) attended church at least monthly during the months prior to death, according to their friends and family. Yet few of those friends and family say church members (4%) or church leaders (4%) knew of their loved one’s struggles. 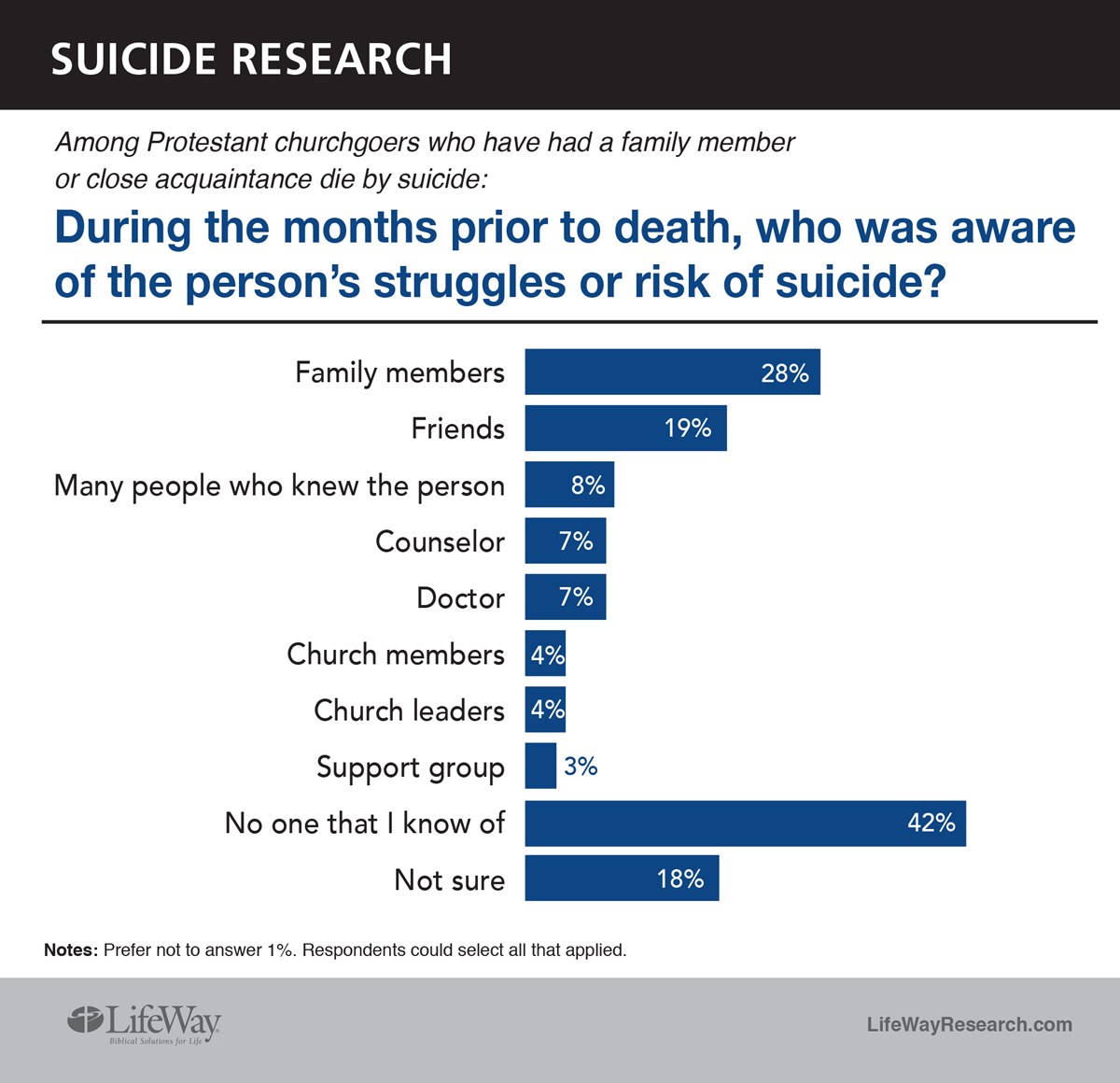 When a suicide occurs, churches often respond with care and concern to survivors. About half of churchgoers affected by suicide (49%) say their church prayed with the family afterward; 43 percent say church members attended their loved one’s visitation or funeral; 41 percent say someone from the church visited their family; and 32 percent received a card. Churches also provide financial help (11%), referral to a counselor (11%) and help with logistics like cleaning and childcare (10%) or planning for the funeral (22%).

Still, churchgoers have mixed responses to suicide. Overall, 67 percent of churchgoers say the loved ones of a suicide victim are treated the same as any other grieving family. And 84 percent say churches should provide resources to people who struggle with mental illness and their families. Also, 86 percent say their church would be a safe, confidential place to disclose a suicide attempt or suicidal thoughts.

Yet churchgoers are aware that friends and family of a person who dies by suicide can be isolated from the help they need because of the stigma of suicide. That can be true inside and outside the church, according to the survey.

More than half (55%) of churchgoers say people in their community are more likely to gossip about a suicide than to help a victim’s family. And few churchgoers say their church takes specific steps to address suicide or has resources to assist those experiencing a mental health crisis.

Churches are most likely to offer prayer support (57%) or small group ministry (41%), according to churchgoers.

Most Protestant pastors believe their church is taking a proactive role in preventing suicide and ministering to those affected by mental illness, according to LifeWay Research.

While 80 percent say their church is equipped to assist someone who is threatening suicide, only 30 percent strongly agree—meaning more than 2 in 3 pastors acknowledge they could be better equipped. 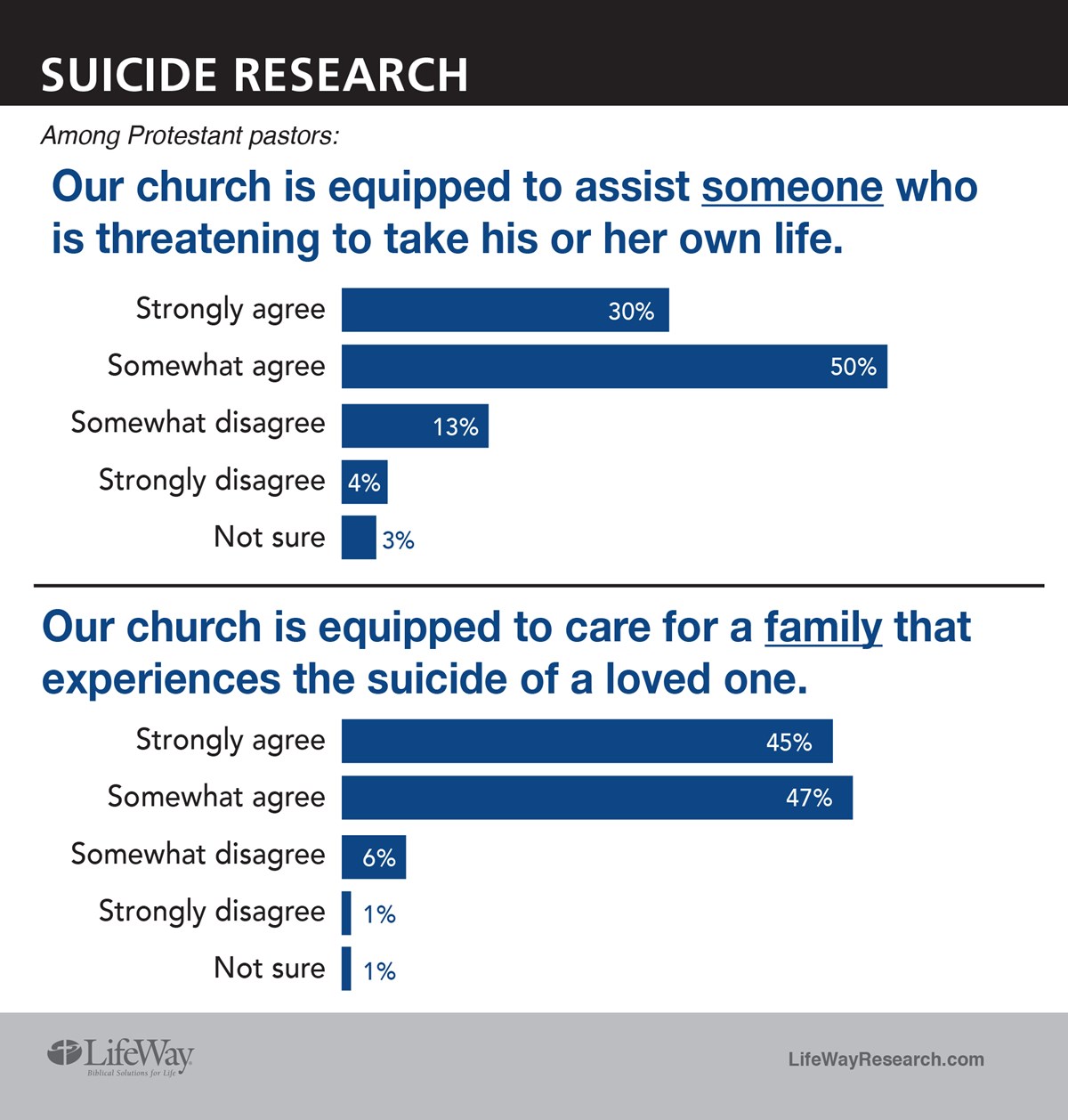 “Suicide in our culture has for too long been a topic we are afraid to discuss,” said Tim Clinton, president of the American Association of Christian Counselors. “Our prayer is that this research will start a national conversation on addressing the suicide pandemic in our nation, and we started by assessing the church’s perspective on and response to the issue. We need a clinically responsive approach that gives the gift of life back to those who feel filled with emptiness.”

Pastors say they are aware when suicides happen in their community. Sixty-nine percent say they know of at least one suicide in their community over the past year. And of those suicides, about 4 in 10 (39%) affected church members or their friends and families.

Ninety-two percent say their church is equipped to help family members when a suicide occurs. Pastors say their church springs into action, offering prayer (86%), calling (84%) or visiting with the victim’s family (80%) and providing meals (68%). Churches also connect families with professional counseling (53%), help plan funerals (48%), connect the family with someone else who’s experienced a suicide in the family (44%) or provide other assistance.

A number of pastors also say they’ve been proactive in preparing to minister to those at risk of suicide. Forty-one percent say they have received formal training in suicide prevention, while 46 percent have a procedure to follow when they learn someone is at risk. Fifty percent say they have posted the National Suicide Prevention Lifeline number, 1-800-273-8255, where staff can find it.

Still, pastors are more likely to say their churches take a proactive role in preventing suicide than churchgoers are.

McConnell says it is clear churches want to be proactive in suicide prevention. They’re also quick to respond to grieving families. Still, there’s much work to be done to reduce the stigma of mental illness and suicide, he said.

Ronald Hawkins, provost and founding dean of the School of Behavioral Sciences at Liberty University, said churches aren’t always a safe place for people to be vulnerable. According to the research, that seems especially true when someone is at risk for suicide.

He hopes the recent study will prompt churches to do more to prevent suicides.

“I and others in ministry have too often looked into the grief-stricken faces of those whose loved ones have taken their own lives,” said Hawkins. “If you have been there, your heart cry is, ‘Please, Lord no more.’ Yet it seems there are always more.

“Our research suggests that Christ followers need to work harder at providing safe places, so filled with love and grace that trust can flourish,” he said. “In such a place, those who have come to believe that suicide may be their only option may dare to open up their inner world and experience a reawakening of hope.”

The Suicide and the Church Research Study was sponsored by the American Association of Christian Counselors, Liberty University Graduate Counseling program, the Liberty University School of Medicine, and the Executive Committee of the Southern Baptist Convention. A demographically balanced online panel was used for interviewing American adults. Respondents were screened to include only Protestant and nondenominational Christians who attend worship services at a Christian church once a month or more. A thousand surveys were completed Sept. 15-19, 2017. Slight weights were used to balance gender, age, ethnicity, education and region. Those who had a close family member or close acquaintance die by suicide were oversampled (500 completed surveys) and subsequently weighted to be proportionate in questions applicable to all respondents. The sample provides 95 percent confidence that the sampling error from the online panel does not exceed plus or minus 3.4 percent (this margin of error accounts for the effect of weighting). Margins of error are higher in sub-groups.

The phone survey of 1,000 Protestant pastors was conducted Aug. 30 to Sept. 18, 2017. The calling list was a stratified random sample, drawn from a list of all Protestant churches. Quotas were used for church size. Each interview was conducted with the senior pastor, minister or priest of the church called. Responses were weighted by region to more accurately reflect the population. The completed sample is 1,000 surveys. The sample provides 95 percent confidence that the sampling error does not exceed plus or minus 3.2 percent. Margins of error are higher in sub-groups.