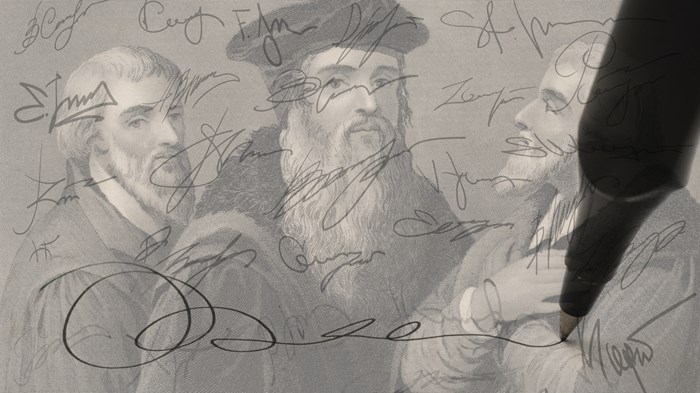 The most obvious effect of the Reformation—which celebrates its 500th anniversary this year—is division.

It is estimated that more than 33,000 different Christian denominations now exist throughout the world, and much of this is blamed on the Reformation. While some are making the case that difference does not necessarily constitute division in Protestantism and the global church, the plethora of denominations is a source of concern for Protestants, who are the heirs of Martin Luther’s movement that has tended to create new churches rather than reform existing ones.

Additionally, the new statement of faith, crafted by a team of Protestant theologians and church leaders, aims to show that Protestants are actually more catholic (meaning “universal”) than Roman Catholics, who demand allegiance to the Roman pontiff, or than Orthodox Christians, who reject the claims of Rome but still rely heavily on apostolic succession to guarantee faithful Christianity.

The list is primarily scholars and academic leaders, but nearly 20 percent are denominational leaders, pastors, or ministry leaders. Signatories hail from 25 different countries and more than 110 institutions (80 from the US, and 30 international). The list is currently dominated by men, with women making up only 10 percent of the signatories thus far. The number of signatories is expected to grow now that the confession has been released to the public, with hopes that more female and international signatories will join.

The group behind the confession is an unlikely alliance of Protestant thinkers who were brought together by the idea of producing positive proof of Protestant unity to honor the 500th anniversary of the Reformation.

The idea originated with Jerry Walls, professor of philosophy at Houston Baptist University. While researching for an upcoming book on Reformation catholicity, Walls noted that “a number of Protestant theologians were calling for a recovery and renewal of catholicity.” In particular, Walls was struck by recently published books by Peter Leithart, Michael Allen and Scott Swain, and Kevin J. Vanhoozer, all arguing for a broad Protestant consensus under such names as “Reformational Catholicism,” “Reformed Catholicity,” and “Mere Protestant Christianity.”

Walls contacted these thinkers, as well as a few others, about drafting a positive statement that, according to the statement’s explanation section, would “put these sentiments into practice in a visible way at a strategic point in church history.”

“I was pleased that the persons to whom I sent my email found the idea interesting and asked for further details of what I had in mind,” Walls said. Kevin Vanhoozer “seemed particularly intrigued,” according to Walls, and so Walls asked him to write the initial draft of the confession and Vanhoozer agreed. Walls and Vanhoozer also gathered a group of 18 interested theologians and church leaders who agreed to serve on the drafting committee to help shape and edit the confession.

The first draft was completed in April, according to Walls and Vanhoozer, and the drafting committee, made up of 16 men and two women from five different nations, fine-tuned the confession for four months before approving a final draft in July.

The statement aims to be a “highest common denominator” for Protestant theology, according to Walls, a common statement that “can be heartily affirmed by church leaders all across the spectrum of the Protestant traditions we represent.”

According to the confession itself, the purpose is not “to replace the confessional statements of the various confessional traditions and churches here represented but rather to express our shared theological identity.” While the confession distinguishes itself from Roman Catholic and Eastern Orthodox theology by being organized “according to the Protestant principles of faith (sola scriptura, sola gratia, sola fide),” the confession does not intend for its signatories to be “defining themselves against others” but rather as Christians “who affirm the common spiritual tradition to which creedal Christianity bears eloquent witness.”

The confession itself focuses on major themes in Protestant theology, which it views as catholic (i.e., universal) in all Christian theology. The confession focuses on such themes as Trinity, Scripture, anthropology, Jesus and his atoning work on the cross, the Holy Spirit, and baptism, among others and is carefully crafted to be amenable to Protestants of any confessional tradition.

“I finally understood the meaning of ‘standing on the shoulders of giants,’” said Vanhoozer. “The process of incorporating suggestions and revising my carefully wrought prose was a healthy and humbling exercise not only in word craft, but also spiritual mortification, insofar as it required making myself (almost) nothing in order to let other voices sound through.”

Gwenfair Walters Adams, professor of church history at Gordon-Conwell Theological Seminary and a member of the drafting committee, was impressed with the spirit of cooperation exhibited in the drafting process. In an email shared with CT, Adams wrote to her fellow committee members:

“It has been a privilege to be a part of this group, to learn from all of you, and to watch you all engage with grace with each other and with me, even on highly controversial issues that have divided the church for centuries. I’m accustomed to collegiality from my seminary colleagues, but to see it also on an inter-seminary and international level, especially in relation to such a strategic and potentially ‘flammable’ project has warmed my heart. ”

Other members of the drafting committee had similar praise. Ken Collins, professor of historical theology at Asbury Theological Seminary, noted that the cooperation was key, stating that it is “better than any single individual could have ever written,” and that it “bears all the markings of ‘we,’ of a community of the faithful.”

Even so, concerns about international representation and diversity were raised by some members of the committee. Natee Tanchanpongs, former academic dean of Bangkok Bible Seminary in Thailand, wondered if they might “take the catholicity further by incorporating various non-English contexts,” suggesting that at least making the confession available in more languages would be valuable.

According to Timothy George, dean of Beeson Divinity School and co-chair of the steering committee for the Reforming Catholic Confession, the confession is currently being translated into Spanish, Portuguese, Korean, and French with plans to provide further translations for a minor fee to cover translation costs.

The prevailing sentiment has been positive, with all members of the drafting committee approving the final version and pledging their signatures. Samuel Waje Kunhiyop, general secretary of the African denomination EWCA, went so far as to pledge broad African support: “My denomination, ECWA, which has well over eight million members, Evangel Fellowship International which is made of all churches founded by the former Sudan Interior Mission (SIM), and Nigerian Evangel Fellowship will readily adopt this great document.”

The committee has high hopes for the Reforming Catholic Confession as a substantive way to commemorate the 500th anniversary of the Reformation and demonstrate what unifies Protestant Christians.

“This will be a good tool,” said Fred Sanders, professor of theology at the Torrey Honors Institute, Biola University. “Letting people say, in October 2017, ‘Not only do I believe in substantive Protestant unity, I’ve seen it with my own eyes; behold, I know its URL.’”

The full text of the “Reforming Catholic Confession” and an explanation are published online. Their website also has the list of committee members and signatories, as well as a form for adding further signatures to the confession.