Leaders inside and outside Trump’s inner faith circle weigh in.
Kate Shellnutt|September 6, 2017 10:18 AM 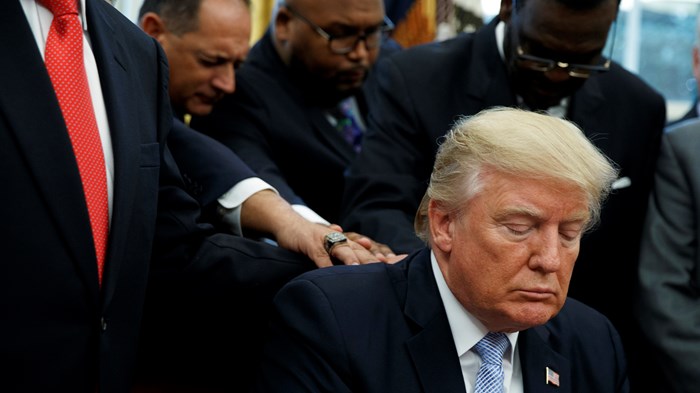 With each controversial decision or remark President Donald Trump makes, his evangelical advisers come up against mounting pressure to resign and cut their ties.

“This is why @rev_rodriguez and I have refused to leave the faith advisory council,” Tony Suarez, vice president of the National Hispanic Christian Leadership Conference (NHCLC) tweeted Tuesday, following the White House decision to phase out the Deferred Action for Childhood Arrivals (DACA) program over the next six months.

While Trump pledged to end DACA during his campaign, Suarez and NHCLC president Samuel Rodriguez have spent months lobbying to protect it for the sake of family unity, meeting with the President to defend their case as recently as last week. In their eyes, access to the chief executive—and the opportunity to influence him on political matters important to the church—is worth it, even if the decision doesn’t turn out their way.

For the two dozen or so evangelical leaders who signed on to advise Trump in the campaign and have gone on to enjoy an open invitation to visit him at the White House, what should they do when their convictions as Christians counter what the President says? (This scenario came up as many believers challenged Trump’s “two sides” approach to Charlottesville last month.)

Here’s what several advisers themselves have said about why they remain involved—some evoking the Old Testament prophets speaking before kings as well as Jesus himself dining with tax collectors—and what fellow Christian leaders think about the line between when to offer counsel and when to step away.

Should Christians keep advising a President they disagree with? Responses arranged from “yes” to “no.”

Johnnie Moore, a Trump adviser whose consulting company represents several other evangelical leaders involved, in a piece for the Religion News Service:

I never considered abandoning the administration for a single second. … I wouldn’t back down for the same reason I wouldn’t have left President Obama or Secretary Clinton had they asked me to be an adviser, even though I largely disagreed with their policies. You only make a difference if you have a seat at the table.

We’ve provided consequential feedback on policy and personnel decisions particularly affecting religious liberty, judges, the right to life and foreign policy. We are also actively at work on issues like criminal justice reform, and when we’ve disagreed, we’ve had every opportunity to express our point of view. Yet, we are not responsible for whether we are able to make a difference, but whether we tried.

Richard Land, Southern Evangelical Seminary president and Trump adviser, in a statement on his website:

I am continuing to serve on President Trump’s advisory council, continuing to offer counsel and continuing to pray for the president, as I am commanded to do by Scripture. To retreat during the challenges of a national leader is not the Christian way, nor what Jesus called us to do; Jesus did not turn away from those who may have seemed brash with their words or behavior. He did not cease praying for and ministering to those who were struggling. Jesus attempted to walk alongside those who needed him at all times, and as Christians, we must do the same, especially when they reach out for our counsel and ask for our advice.

Our task as members of President Trump’s advisory group is to give advice and counsel. Whether or not the president and his administration take it is up to them.

Could you imagine Daniel, Jeremiah, Samuel, Nathan, or Isaiah saying they’d no longer advise or speak to the king or government?

Liberals and left leaning evangelicals are advising us to get off our prayerful support of the President. I will listen to God not man. Our Faith Leaders group is praying and working hard to advance the cause of Christ. Please pray.

There is no doubt that Christians must speak truth to power, but the line between advisement and endorsement, especially in the eyes of the public, is a fine one. When local church leaders walk into the halls of power, we go as one thing—the prophet of God. We are there to declare what God says, fulfilling our role as salt and light and rebuking the works of darkness. Perceiving when you have ceased to be that, and become instead a puppet for the promotion of an agenda, takes Spirit-given wisdom. We must pray for great discernment.

Pastors need to weigh the difference between beneficial access to a troublesome leader and endorsement by association. On the one hand, such access—if it is making a difference—may be important and valuable. This is when a prophetic voice could be heard or where truth-to-power is present. But such associations are also seductive. Our motive for them may not be clear even to us.

In addition, troubling leaders can cross a line where rejecting any association is itself a prophetic act. And pastors need to ready for that as well. Some pastors might revisit the context of the Barmen Declaration in 1930s Germany. Not because 2017 is paralleled by 1934, but because those pastors’ discernment and courage is parallel. In that case the pastoral voice needed to be heard in public outside the halls of power.

There’s no off-the-shelf answer when it comes to knowing exactly what counsel Christians should give wayward political leaders. It depends on facts and circumstances, so they have to rely on wisdom, good judgment, and spiritual maturity. It's helpful to keep in mind the words of Martin Luther King Jr., who said the church should be the conscience of the state and never its tool. That’s especially the case when it comes to associating with a political leader who acts in ways that are fundamentally incompatible with a Christian ethic.

The perennial danger facing Christians is seduction and self-delusion. That’s what’s happening in the Trump era. The president is using evangelical leaders to shield himself from criticism; and they, in turn, are dressing up their manipulation in spiritual garb. Evangelicals with moral wisdom and spiritual discernment should disassociate themselves from a man who is using them in ways that discredits the public witness of Christianity.

The sinners and tax collectors were not political officials so there is no analogy there. Besides, Jesus was not giving the sinners and tax collectors political advice—he was telling them to repent! If that’s what evangelical leaders are doing with our President, and telling him when his policies are un-Christian, and explaining to him that racism is an enormous sin and there is no moral equivalency between the two sides in Charlottesville, then well and good. Otherwise, they are complicit with the sins of our leaders.

Dwight McKissic, Southern Baptist leader and pastor of Cornerstone Baptist Church, specifically on what advisers should say regarding Charlottesville: