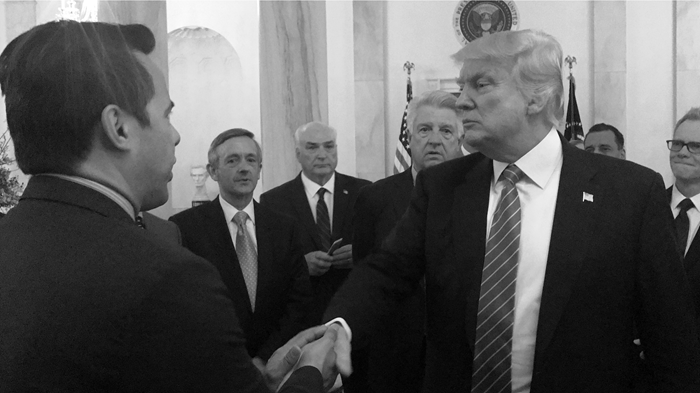 Just days after President Donald Trump met with evangelical leaders to discuss the uncertain future of the Deferred Action for Childhood Arrivals (DACA) program, the White House announced Tuesday that the program will end in March.

Attorney General Jeff Sessions called DACA—which allowed 800,000 young immigrant “Dreamers” to obtain temporary legal status and enter the workforce over the past five years—“unconstitutional” and an “overreach of the executive branch.” He said the program led to a surge of young immigrants at the border with Mexico, and ultimately allowed undocumented workers to take jobs from Americans.

The phase-out of DACA leaves those students and workers (including young Christian leaders) at risk of deportation—and puts pressure on Congress to pass immigration reform legislation in the meantime.

Two-thirds of American evangelicals favor giving work permits to Dreamers (66%) while far fewer oppose the permits (22%), according to a Morning Consult/Politico poll released Tuesday evening. Almost 6 in 10 US evangelicals (57%) believe DACA recipients should be allowed to become citizens, while almost 2 in 10 (19%) believe they should be deported.

“Hundreds of thousands of Hispanic young people will be overcome with fear and grief today,” said Samuel Rodriguez, president of the National Hispanic Christian Leadership Conference (NHCLC), who has repeatedly lobbied in DACA’s defense as part of the President’s evangelical advisory board. [Rodriguez is also a CT board member.] 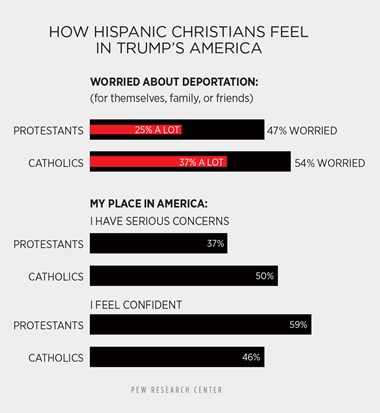 “Simultaneously, a multiethnic coalition of tens of millions of law-abiding US citizens will begin to put unrelenting pressure on members of Congress to provide a permanent solution for Dreamers, whose fate is in question by no fault of their own,” he said.

Rodriguez delivered petitions to the White House and met with Trump on Friday, tweeting that he and fellow advisers “continue to use our access to advocate for #DREAMers.”

In The Washington Post, Georgia megachurch pastor Jentezen Franklin said he told Trump that Dreamers were “good kids” and he wanted to see Trump extend compassion to them.

Last week, the NHCLC, along with the National Latino Evangelical Coalition, World Relief, and the Evangelical Immigration Table (EIT), voiced their support for DACA and its recipients. One young Dreamer, a Liberty University graduate, said in The New York Times that he hoped Trump adviser and Liberty president Jerry Falwell Jr. could help convince the President to keep DACA.

Trump teased his decision on Twitter before Wednesday’s announcement, tweeting, “Congress, get ready to do your job - DACA!”

The President explained the process in his official statement:

The Department of Homeland Security will begin an orderly transition and wind-down of DACA, one that provides minimum disruption. While new applications for work permits will not be accepted, all existing work permits will be honored until their date of expiration up to two full years from today. Furthermore, applications already in the pipeline will be processed, as will renewal applications for those facing near-term expiration. This is a gradual process, not a sudden phase out. Permits will not begin to expire for another six months, and will remain active for up to 24 months. Thus, in effect, I am not going to just cut DACA off, but rather provide a window of opportunity for Congress to finally act.

Rodriguez said he has directly communicated his disappointment with Trump’s decision to end DACA, but also understands the need for another form of protection for young immigrants. A similar executive program, Deferred Action for Parents of Americans (DAPA), was blocked in court in 2015. Meanwhile, Senators Lindsay Graham (R-SC) and Dick Durbin (D-IL) have reintroduced their solution, the DREAM Act.

In addition to the 57 percent of US evangelicals that favor citizenship and the 19 percent that favor deportation, 15 percent say DACA recipients should be allowed to become legal residents but not citizens, while 9 percent don’t know. 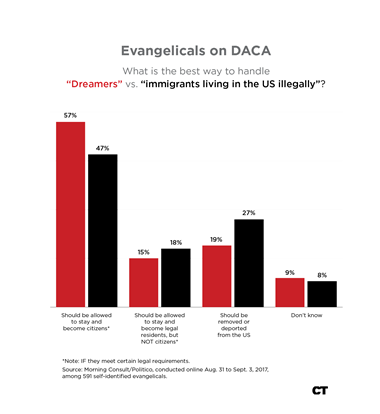 In contrast, US evangelicals feel a bit less compassionate toward undocumented immigrants in general. While a plurality of 47 percent still favor a path to citizenship, 27 percent favor deportation, following by 18 percent favoring legal residency (but not citizenship) and 8 percent not knowing what they think.

The Morning Consult/Politico poll, conducted August 31 to September 3, found similar views to an earlier April 2017 poll [which CT initially charted before the new poll was released; new chart included here], with the main difference being that fewer evangelicals now choose the middle option of legal residency.

Senator James Lankford, an Oklahoma Republican and a Baptist pastor, agreed that the responsibility lies with his branch of government. “It is right for there to be consequences for those who intentionally entered this country illegally. However, we as Americans do not hold children legally accountable for the actions of their parent,” he said. “In the coming months, Congress must address this issue.”

Eight EIT leaders—including World Relief president Scott Arbeiter, Council for Christian Colleges and Universities president Shirley Hoogstra, and Wesleyan Church ambassador Jo Anne Lyon—agreed in a batch of individual statements released Tuesday afternoon. “Congresses have convened and adjourned from one election cycle to the next while Dreamers have waited,” said Leith Anderson, president of the National Association of Evangelicals. “May this Congress step up to legislate for Dreamers and turn waiting into promise and hope.”

“Congress should do the right thing and provide a solution for those who were brought here by parents as children,” said Russell Moore, president of the Ethics and Religious Liberty Commission of the Southern Baptist Convention. “Meanwhile, churches will be here to speak hope to children now thrown into fear and insecurity about their families and their futures.”

Matthew Soerens, director of church mobilization for World Relief, predicted that about 30,000 DACA recipients a month would lose their jobs once the six-month delay ends, unless Congress puts another program in place. He said he believes it would take “lots of political pressure to resolve this well before March 5.”

The NHCLC will amp up its lobbying efforts between now and the DACA deadline, including moving staff to Washington and holding a prayer meeting in October. Rodriguez stated:

For far too long in this country, Hispanic young people have been the political bargaining chips of our powerful politicians. This is an affront to the sanctity of life, it is inhumane, and the Hispanic community will stand for it no longer. Our elected members of Congress have time and again professed concern for the Hispanic community, and yet have chosen to do nothing. We will not distinguish between Republicans and Democrats but between those who stand for righteousness and justice and those who do not.

Editor’s note: This post has been updated with newly released Morning Consult/Politico poll results, as well as reactions from Evangelical Immigration Table leaders.