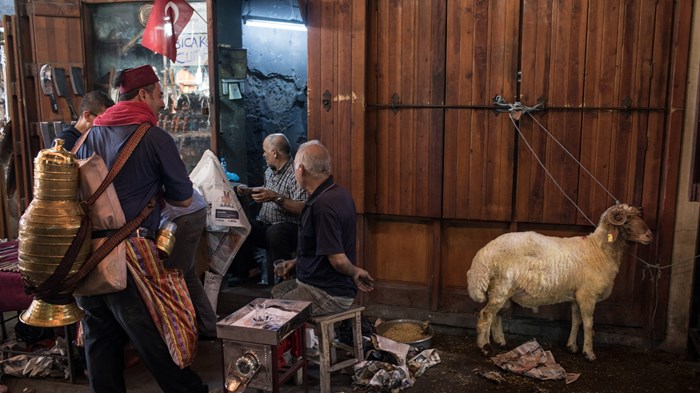 The holiest of Islam’s two yearly holidays is Eid al-Adha; in Arabic, “the feast of the sacrifice.” This week, on August 21, Muslims worldwide slaughtered sheep, remembering how God saved Abraham from sacrificing his son Ishmael.

Though the Qur‘an doesn’t name the son, Muslims believe it was the ancestor of the Arabs that God used to test Abraham’s faith. Should Christians understand this as a theological error? Or an outright lie?

The identification matters, because Isaac is a prefiguration of Jesus, whose sacrifice saved man from his sins. Religions often have differing traditions; and for Christians, Muhammad’s conscience in founding Islam is unknown. But some Christians today are comfortable delving into the conscience of everyday, ordinary Muslims, finding deception at every turn.

The idea is called taqiyya: that Muslims are permitted by their faith to lie if it will advance the cause of their religion.

Tharwat Wahba, professor of mission at the Evangelical Theological Seminary in Cairo, cited a tradition of Muhammad that allows Muslims three exceptions to lie for a greater cause: War, reconciliation, and to keep a wife happy.

Might some Muslims extrapolate two of these for their experience in the West? Does the first exception imply there is a secret jihad? In the second exception, a religion of peace?

“Accept kindness and friendship, but be alert and awake,” Wahba said. “Don’t be naïve. Some have agendas.”

So what if a Muslim invites you to a celebration? The lamb might be tasty, but should Christians be wary?

Statistics show they already are.

The 2018 American Muslim Poll from the Institute for Social Policy and Understanding (ISPU) found only 36 percent of white evangelicals believe Muslims are committed to the well-being of America.

And according to the Pew Research Center, 50 percent of self-identified white evangelicals believe there is a “great deal” or “fair amount” of support for extremism among Muslims living in America. This is often connected to a fear of Shari’ah law.

Yet according to the 2017l ISPU poll, only 10 percent said Shari’ah should play a legal role in their community.

Are the rest lying? Or are evangelicals predisposed to assume they are?

Taqiyya is an Arabic word that has come to mean “dissimulation,” said Martin Accad, chief academic officer of Arab Baptist Theological Seminary in Lebanon and associate professor of Islamic Studies at Fuller Theological Seminary. It is a contested allowance in Islam to conceal your true faith if under personal duress.

But in much anti-Muslim discourse, taqiyya has been redefined into a religious obligation for Muslims to lie to non-Muslims not simply for survival, Accad said, but to serve the expansionist agenda of their religious community.

Without knowing the term, the concept is creeping into Christian consciousness. (For example, Ben Carson brought it up during his presidential campaign.) And Accad wants to nip it in the bud.

“My intention is to guard us against bearing false witness,” he wrote for Ramadan last year. “Would it not represent taqiyya on our part to use a Muslim belief against Islam, by promoting a partial understanding of it?”

Like the name of Abraham’s son, taqiyya is not mentioned in the Qur‘an. But an anti-Muslim website draws attention to several references which seem to imply a license to lie.

The central story in Islamic tradition involves a family converted to Islam by Muhammad. Persecuted, the mother and father refused to give up their faith and were killed.

Their son wavered, maligned the prophet, and praised the pagan gods. Returning later to Muhammad, he received comfort, asked only about what was in his heart.

But a far more prominent theme in the Qur‘an, Accad said, is hypocrisy. Considered a grave sin among Muslims, it is almost always followed with promises of hellfire. An expanded taqiyya definition does not mesh well.

Shia Muslims adhere to taqiyya more than Sunni Muslims, but the reason is historical, he said. They have been persecuted more often by their Sunni rulers.

Amr Salah, a lecturer at the prestigious al-Azhar University in Cairo, hardly heard of taqiyya growing up, save in slander against Shia Muslims. But he was disturbed to hear how some American Christians were being informed.

“The discourse of taqiyya reminds me of how Nazi Germany spoke of the Jews,” he said. “If you say people are not trustworthy, it is dangerous.”

Muslims are taught not to look into the hearts of others to judge their motivations. And they are called to be a witness among the people. (Sumaya, the mother in the above story, was the first martyr in Islam.)

“As humans, we want to survive,” Salah said, noting the story of Peter’s denial at the cross. “The religious ideal is to not deny your faith. But the human response is to have mercy.”

There is a parallel in Christianity’s Novatian and Donatist heresies in the third and fourth centuries, over believers who denied Christ under persecution. Islamic terrorism has revived the issue.

One day last year, Salah sat down to watch the news with his Muslim colleague. Thirty Christians had just been ambushed on the way to a church retreat at a local monastery in Upper Egypt.

One mother had lost her whole family. Spared herself, she had looked into the eyes of the attackers and told the reporter they were just kids. In sympathy, she forgave them.

Unlike many, Salah’s colleague was not impressed.

“It’s all propaganda,” Salah recalled him saying. “Don’t believe her.”

Fuming, the colleague scoured the internet until he found a video of a Coptic bishop cursing and slapping his parishioner in the face.

“This is the ‘forgiveness’ she is speaking about,” he said. “Better start spreading it inside their churches, and teach that bishop about it.”

Salah was not pleased. He explained there are some who do not trust any friendly gesture Christians make toward Muslims.

“If you search for something, you will always find it. But you are giving yourself an excuse to hate others,” he said.

“It is ironic, but understandable. They don’t trust others because they don’t have pure intentions themselves.”

But beyond extremists, certainly some Muslims have an agenda. How can the American Christian discern? And should some Christians examine themselves?

“The Bible calls us to love our neighbors and our enemies. It is impossible to know someone’s intentions with certainty, and anyone is capable of having negative intentions,” said Salim Munayer, executive director of the Jerusalem-based Musalaha reconciliation ministry.

“People should be held accountable for their actions, but this is not something that the church should be preoccupied with. It is a job for the state.”

And in America, the state is keen to stop crime.

“Quite frankly, I have not seen that taqiyya is in any way related to this issue,” Accad said. Needless controversy has been provoked by anti-Muslim groups towards mainstream organizations which do not hide their desire to spread Islam.

Specifically mentioning the Council on American-Islamic Relations and the Islamic Society of North America, Accad said they view this as what God expects of them.

“This is not unlike evangelical sentiments, which do not hide their desire for the entire world to come to faith in Christ,” he said. “And in some circles, they aim also for greater impact in the political and public sphere.

“We may dislike when Muslims do it,” said Accad. “But that does not make it illegitimate.”

Legitimacy comes from the non-forceful spread of religion, including the non-persecution of those who choose a different faith.

Religion does not have a good record on this point historically, Accad said, including mainstream interpretations of Islamic law that still do not allow for full freedom of religion.

Munayer agreed with Accad’s perspective on taqiyya, and described positive interfaith initiatives in the Holy Land. But he had a message to share from one minority to another.

“We should encourage Muslims in America to speak up for religious freedom for Christians in the Middle East, where Christians are a minority,” he said.

Wahba said that those who have militant purposes can usually be easily identified. And he counseled that one should be well-trained before engaging in theological dialogue, in case the agenda is to beautify Islam and draw people in.

But rather than assuming deception, there is also a cultural factor at play, he said. While Western societies value truth-telling, Eastern societies prioritize honor and saving face. Note again the third reason Muslims are permitted to lie (“happy wife, happy life”).

Rather than trying to judge whether or not a Muslim is practicing taqiyya, Wahba recommended 1 Corinthians 13.

“Love believes all things,” he said. “If you fear a Muslim is not honest, it will build walls. But love will go to him and build bridges, and be a means of witness to the gospel.”

Practically speaking, do not be afraid to join Muslims if invited to holiday celebrations, whether the recent Eid or Ramadan’s iftar fast-breaking. Trust God is at work no matter their heart, said Wahba.

“Love is stronger than lying. It is not about them, it is about me.”

Editor’s note: The headline and deck of this article have been changed for greater clarity.