The world’s newest nation remains its most fragile state.
Kate Shellnutt
February 09, 2018 10:07 AM 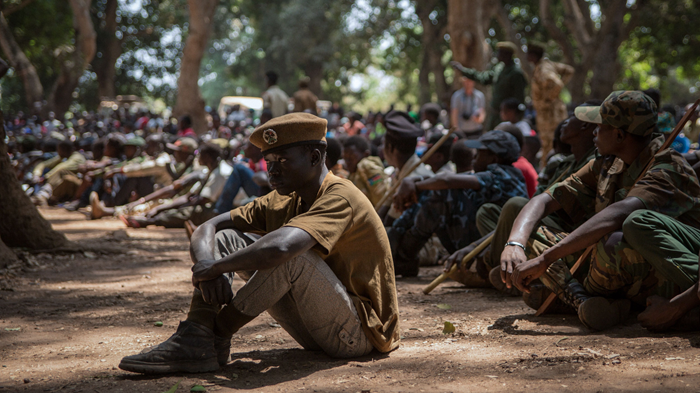 With the help of World Vision, more than 250 South Sudanese children will have the chance to return to school, reunite with their families, and receive counseling after years of being forced to serve as soldiers and domestic workers during their country’s civil war.

The New York Times reported this week that 87 girls and 224 boys were freed in the second-largest release by armed groups since the conflict began, and several hundred more are expected to transition in the coming weeks.

World Vision, which has worked in South Sudan since 1989 and currently reaches 1 million people displaced by the conflict, received the children on Wednesday and will oversee their recovery and reunification.

“We are particularly concerned about a number of the girls being released who have experienced sexual or gender-based violence,” said Mesfin Loha, interim national director at World Vision South Sudan. “We will get them the support so they have a sense of hope again.”

With high levels of poverty, widespread displacement, and lack of education (70 percent of South Sudanese children are not in school—the highest proportion in the world), youth in what World Vision ranks as the world’s most fragile state are particularly vulnerable targets for the armed groups.

The United Nations has coordinated the release of almost 2,000 of 19,000 children recruited and kidnapped since the civil war began in 2013.

World Vision’s reintegration program gets support from the UN Children’s Fund, or UNICEF. Moving forward, World Vision case workers in the city of Yambio will work with children in recovery, offer school and vocational training, and provide interim care for those unable to locate their families.

“South Sudan’s children have already seen and experienced unimaginable violence. It is jeopardizing the country’s next generation,” Loha said. “These initiatives will help children have the opportunity to earn income in the future and help them navigate away from returning to the conflict.”

South Sudan gained independence in 2011, making it the youngest nation in the world. Though the central African country is about 60 percent Christian, it still ranks among the worst places for Christian persecution (this year it was No. 4).

In initial news coverage following this week’s release, teens described their responsibilities as bodyguards, lookouts, and fighters, traumatized by the killings they witnessed. Most said they had been kidnapped and forced into one of the warring factions, the South Sudan National Liberation Movement or the Sudan People’s Liberation Army-in-Opposition.

“Child abduction is always in areas of cattle raids particularly between a tribe called Murle in Pibor. When this people go to raid cattle of the Nuer and Dinka, they end up stealing children as well,” said Edward Dima, president of the Baptist Convention of South Sudan, who has fled to Uganda amid the conflict.

“I pray for peace to be restored in the country to stamp out some of those practices.”

Beyond those recruited by fighters, multitudes more have witnessed and suffered during the five-year civil war. The UN reports that 1 million children in South Sudan will require psychological support due to “the emotional impact of conflict, loss of family members, separation, and displacement.”

Christians serving in areas of active conflict have served as resources for trauma counseling, and faith has been shown to help survivors build resilience rather than despair in the wake of terror and violence.

At the same time, South Sudan has suffered food and water shortages as a result of the war. Last month, UNICEF estimated that a quarter million children were “at risk of imminent death” due to malnutrition.

In 2017, aid workers with evangelical charity Samaritan’s Purse were kidnapped by armed rebels and later released. Fighters regularly use violence against workers and try to block distributions.

The South Sudan Council of Churches has continued to pray for peace and ask for humanitarian assistance.

In 2015, CT traveled to South Sudan with World Vision president and CEO Richard Stearns to see first-hand why Christians remain hopeful about the world’s most fragile state.