As former gymnast advocates for victims in the church, SGC calls her take on its past scandal “not true.”
Kate Shellnutt
February 06, 2018 8:00 AM 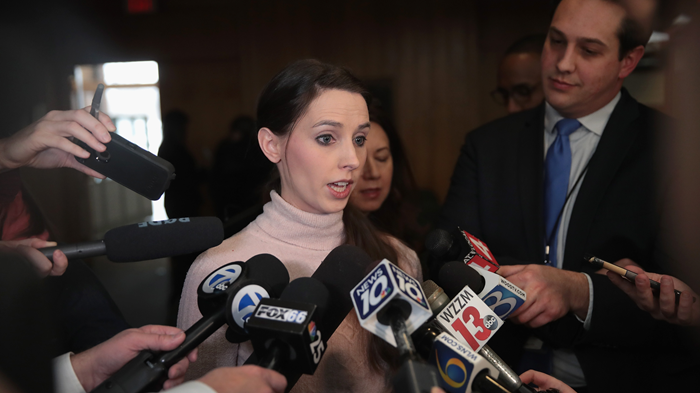 Comments by Larry Nassar accuser Rachael Denhollander in a Christianity Today interview have revived debate over a dismissed abuse lawsuit against Sovereign Grace Ministries (SGM) dating back to 2012.

The 33-year-old said her former church’s stance toward victims and involvement in restoring former SGM president C. J. Mahaney led her family to leave the congregation.

Sovereign Grace Churches (SGC) issued a statement dated February 2 calling her characterizations untrue, citing the 2014 dismissal of a civil case against SGM. (In a separate case, a former youth leader with SGM had been convicted of abuse.)

We thank God for Rachael’s courage in confronting Nassar and commend her invaluable work on behalf of other abuse victims. Like so many, we were impressed by her faithful witness to Christ in such difficult circumstances.

At the same time, it needs to be said that she is mistaken in her accusations made against Sovereign Grace Churches and C. J. Mahaney. The Christianity Today article publicly mischaracterizes Sovereign Grace and C. J. based on accusations of which Rachael had no involvement and which are not true and have never been true.

It’s extremely difficult to respond to false accusations without appearing unsympathetic to victims of abuse. It is our sincere hope that this brief statement has done both by speaking truthfully, respectfully, and in a way that honors God.

Denhollander, whose gospel-infused testimony against the abusive doctor made national news and went viral among Christians, stood by her remarks regarding SGM in a 1,000-word Facebook post shared on Monday.

She said the case dismissal—in which the judge ruled the alleged victims had waited too long to sue—was “not evidence, in any way, shape, or form, that SGM has not done what is alleged,” and urged SGC to allow GRACE (Godly Response to Abuse in the Christian Environment) to conduct an independent investigation.

I am glad to know that SGC is concerned about victims of sexual assault, but I assure them the most unsympathetic thing they can continue to do is refuse to respond to the concerns of sexual assault victims, myself included. I have no need to be protected from any evidence or response they have. On the contrary, I have sought out this evidence and a response, for more than seven years.

I chose to pursue expertise in the area of sexual assault and institutional dynamics years ago, including my own legal training as an attorney. Having reviewed the allegations and evidence against SGM and their own responses to it, my concerns have only solidified and grown.

As CT reported five years ago, the case against SGM claimed that the ministry had conspired to cover up abuse within its network.

Back in 2014, Nathaniel Morales, a former youth leader at SGM’s flagship Covenant Life Church in Maryland, was convicted on five counts of sexual abuse against three underage male victims between 1983 and 1991.

Mahaney, who was lead pastor at Covenant Life when the alleged incidents took place, has expressed grief for the victims, but said he was not involved in a cover up. The ministry and its leaders have repeatedly countered accusations that they discouraged victims from coming forward or knew about the abuse.

“I have never conspired to protect a child predator,” Mahaney said in a 2014 statement, “and I also deny all the claims made against me in the civil suit.”

In a 2014 open letter to members of Sovereign Grace churches, Prater said “we deny—in the strongest terms possible—that any Sovereign Grace leaders conspired to cover up abuse as alleged in this lawsuit. … We believe these allegations are not true.”

He also noted that member churches would be provided with MinistrySafe resources in order to have “the best training and safety measures available.” He stated:

While a response to allegations is necessary, our priorities would be out of sorts if we were only concerned with vindicating ourselves in the public arena. Yes, we have been the target of misinformed critique in both the secular and Christian media, and more will likely come. I pray that God gives us all grace to respond wisely and biblically. But regardless of the public discourse, we are strongly committed to ensuring a safe environment for the children in our churches.

SGM evoked a religious freedom defense in 2013 when the confidentiality of its pastoral counseling was challenged, stating, “SGM believes that allowing courts to second-guess pastoral guidance would represent a blow to the First Amendment that would hinder, not help, families seeking spiritual direction among other resources in dealing with the trauma related to any sin including child sexual abuse.”

At the time, GRACE executive director Boz Tchividjian urged greater transparency, saying, “Any time an institution—a Christian institution—responds or defends its behavior as it relates to sexual abuse allegations with quoting laws and hiding behind constitutions, it causes me concern.”

He recently shared Denhollander’s interview, quoting her remarks about the wickedness of using the gospel to silence victims, and calling it a “must read.” His organization has investigated abuse at institutions including New Tribes Mission and Bob Jones University.

Denhollander specifically brought up Morales in her interview, in which she accused churches of being quick to condemn sexual abuse when it takes place outside their walls, but defensive when such accusations threaten their own organizations. She told CT:

The ultimate reality that I live with is that if my abuser had been Nathaniel Morales instead of Larry Nassar, if my enabler had been [an SGM pastor] instead of [MSU gymnastics coach] Kathie Klages, if the organization I was speaking out against was Sovereign Grace under the leadership of [Mahaney] instead of MSU under the leadership of Lou Anna Simon, I would not only not have evangelical support, I would be actively vilified and lied about by every single evangelical leader out there.

The only reason I am able to have the support of these leaders now is because I am speaking out against an organization not within their community. Had I been so unfortunate so as to have been victimized by someone in their community, someone in the Sovereign Grace network, I would not only not have their support, I would be massively shunned. That’s the reality.