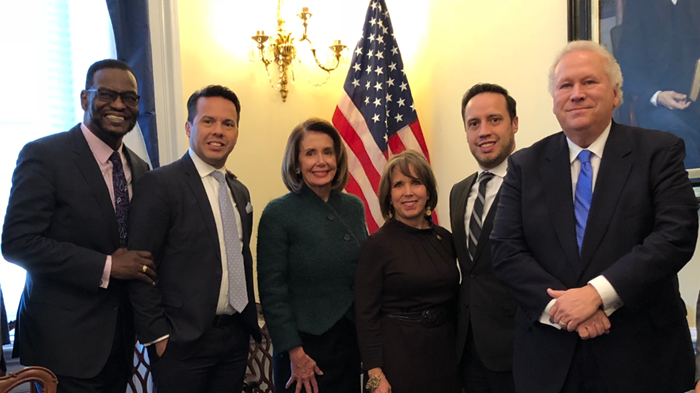 Many evangelicals won’t let partisan divides keep them from rallying for immigration reform, particularly the urgent push for congressional action to allow Dreamers—who entered the US as kids—to remain in America.

Several pastors and members of Trump’s evangelical advisory board met Thursday with House Minority Leader Nancy Pelosi, who they cheered for her defense of young immigrants fighting for legal status.

A prominent Democrat in Congress, Pelosi also happens to rank among evangelicals most-disliked politicians; more than half (55%) of self-identified evangelicals had an unfavorable view of her in a recent Politico/Morning Consult poll.

Yet Trump adviser and National Hispanic Christian Leadership Conference (NHCLC) president Samuel Rodriguez (also a CT board member) told Pelosi today that “America is a better place because of your prophetic leadership” on immigration.

“We’re joined together in the spirit of bipartisanship, compelled by our faith, to protect our Dreamers,” the minority leader said in a press conference streamed on Facebook Live.

Currently, nearly 70 percent of evangelicals believe Dreamers should be allowed to stay in the country, with 49 percent supporting a path to citizenship and 20 percent believing they should become legal residents but not citizens, Politico/Morning Consult found. (Overall, 75 percent of registered voters want the Dreamers to stay.)

For weeks, there have been talks of immigration reform from Congress and the White House. But as plans for bipartisan immigration overhaul have stalled, advocates have become desperate for a fix for Dreamers, once protected by deportation from the program known as Deferred Action for Childhood Arrivals (DACA). Since the Trump administration rescinded DACA, an estimated 800,000 young adults could lose their status and risk deportation as early as March 5.

Johnnie Moore, a fellow adviser to Trump and an evangelical consultant, helped organize the gathering and holds out hope that Congress will bring legislative protection for Dreamers. He tweeted:

Most Christian leaders I know, all Democrats & nearly every Republican, as well as @POTUS himself, believe this is the just thing to do.

It is the job of Congress to make laws & not according to their opinions but the opinions of their constituents. Our system demands compromise. We encourage & pray for a #DACADeal.

“We believe this is a special category of immigrants who are not legally culpable, who in most cases have no home other than the United States, and who are a blessing to their communities and to their churches,” read a letter signed by 51 leaders, including several Southern Baptist pastors and denominational leaders as well as evangelicals like Leith Anderson, president of the National Association of Evangelicals, Scott Arbeiter, president of World Relief, and D. A. Carson, president of The Gospel Coalition.

Many evangelicals who support immigration reform, including leaders involved with the Evangelical Immigration Table, are particularly concerned about family and life issues, praying for a policy that keeps parents and children together, prioritizes safety, and upholds human dignity.

NHCLC vice president Tony Suarez, who also met with Pelosi, described the organization’s advocacy for immigration reform as part of its efforts “protecting lives from womb to tomb.”

Back in October, 29 percent of evangelical voters considered a Dreamers bill a top priority for Congress and 28 percent considered it “an important but lower” priority, according to a Morning Consult/Politico poll.