Outgoing Planned Parenthood president leaves legacy on both side of the abortion debate.
Kate Shellnutt
January 30, 2018 8:00 AM 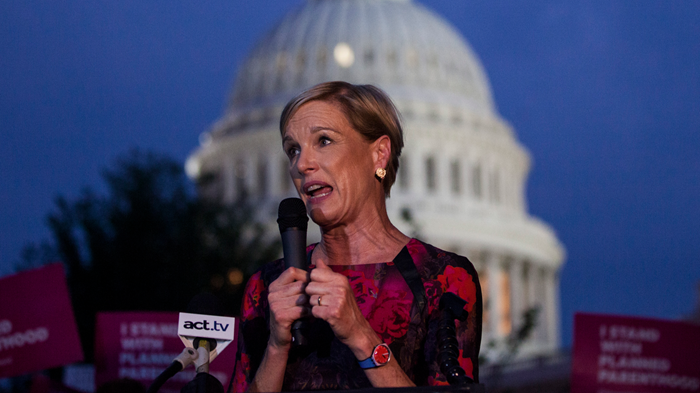 After leading Planned Parenthood for over a decade, Cecile Richards has built a legacy as one of the organization’s most effective leaders, rallying millions of new supporters to the issue of “reproductive rights.”

In doing so, she also intensified the pro-life cause among those who oppose her organization—and the broader pro-choice movement—for providing and endorsing abortion.

As evangelical sociologist (and CT board member) Michael Lindsay once wrote in 2008, “Political movements like the Religious Right don't need a ‘god’ to succeed, but they do need a devil. Nothing builds allegiances among a coalition like a common enemy.”

Richards has proven divisive; a line in a New York Times article about her retirement states that, “Depending on whom you ask, the elegant 60-year-old is a national ‘hero’ or a ‘deeply evil woman’ and ‘mass murderer.’”

The announcement of her retirement came days after the annual March for Life and the anniversary of Roe v. Wade, two of the most popular occasions for pro-life demonstrations.

“Planned Parenthood has never been as slick and as politically savvy as it has been under the reign of Cecile Richards. That has served Planned Parenthood well, but in some ways it has served the pro-life movement well, too,” said Karen Swallow Prior, a Liberty University professor of English who has written about her own history of abortion activism.

“Richards helped turn what might once have been seen as a beleaguered public service agency into an easy target for the anti-institutional idealism of a younger generation of pro-lifers.”

As Richards led Planned Parenthood through unprecedented political shifts and turmoil since 2006, the organization remained shorthand for pro-life leaders to refer to efforts to defend abortion in America.

“Planned Parenthood now performs more than a third of all abortions in the United States and continued to be its biggest defender in the legislature and the courts,” National Right to Life Committee (NRLC) concluded in its annual report, released last week.

They attribute its continued strength, in part, to Richards’ leadership and strategy.

“Richards, frankly, has been a brilliant leader. She has navigated scandals and addressed deep problems expertly and deftly—somehow leading Planned Parenthood out of serious trouble time and time again,” said Charles Camosy, Fordham University ethics professor and author of Beyond the Abortion Wars.

“Her stepping down is a huge loss for them, as whoever comes next cannot possibly be as skilled as she was at keeping this organization from the scrutiny and justice it deserves.”

Most significantly, Richards defended Planned Parenthood amid the release of undercover videos from the Center for Medical Progress (CMP), which purported to show the organization’s involvement in illegally selling fetal remains. Last month, the Justice Department began looking into a congressional review of the videos, in what may be the groundwork for a coming investigation.

“Richards was the most devoted practitioner of Planned Parenthood’s ‘out of sight, out of mind’ mantra to cover up their barbaric abortion business from the public,” stated CMP. “Richards’s departure shows that the old strategy is no longer working as Planned Parenthood faces federal criminal investigation….”

Camosy said Richards “absolutely” gave momentum to the pro-life opposition and wondered whether she “decided to abandon a sinking ship” in light of the Justice Department inquiry.

Planned Parenthood has also faced ongoing efforts by some states to limit the government funding the abortion provider receives through Title X and Medicaid, as well as state laws restricting abortion.

But Richards has used the political climate—culminating with the election of President Donald Trump—to draw in supporters. Richards told NPR the current momentum around women’s rights and abortion rights makes it a good time for her to move on.

“Regardless of who serves as its figurehead, Planned Parenthood is now firmly situated within the pro-life imagination for what it is: the nation's largest abortion sales company and trafficker of fetal parts, Prior said. “Planned Parenthood has probably never been more powerful—and that means it has also never been more vulnerable to both external pressures and internal ones such as a change in leadership.”

The recent NRLC report details how Planned Parenthood has grown “stronger and bolder than ever before.” Increasing its revenue to a record of almost $1.5 billion, the abortion provider’s marketing leans into its opposition to Trump and identifying with the popular Women’s March, the pro-life group noted. The Times reported that Planned Parenthood volunteers and supporters have jumped from 2.5 million to 11 million just since the 2016 election.

“Cecile Richards’ leadership at Planned Parenthood was unique because of the high profile, media-savvy nature of her presence. Her presidency coincided with a turn in the abortion rights movement toward a much more aggressive stance toward dissidence,” said Russell Moore, president of the Ethics and Religious Liberty Commission of the Southern Baptist Convention.

“For many years, the abortion industry had operated in a cultural eco-system that saw abortion as regrettable even by many who wanted it legal. The abortion industry of course did not share that characterization but was unwilling, at least for many years, to launch any overt measures to counter such a sentiment,” he said. “Sadly, during the tenure of Cecile Richards, Planned Parenthood and the abortion industry as a whole, have brazenly attempted to do just that—convince the public that abortion is to be considered a positive good. Short-term, public opinion may be swayed that direction. Long-term, the human conscience will not.”

Despite a nationwide drop in abortions, Planned Parenthood’s rates remain steady as it gains market share; meanwhile, the number of patients seen annually has dropped from 3 million to 2.4 million since 2008, due to fewer women coming in for other services, according to the NRLC report, which is based on numbers from Planned Parenthood, the affiliated Guttmacher Institute, and the US Centers for Disease Control and Prevention (CDC).

Even without the kind of success Planned Parenthood experienced under Richards, some pro-life leaders said their movement’s opposition—which now enjoys a broader coalition of religious voices and a wave of enthusiasm from millennials—would be just as fierce.

“Honestly, I’m not sure Cecile affects the pro-life movement at all,” said Abby Johnson, the former Planned Parenthood director turned activist. Her organization, And Then There Were None, has reportedly encouraged over 400 clinic workers to leave the industry.

“We aren’t opposed to Planned Parenthood because of who’s at the helm. We are opposed because they take the lives of over 300,000 innocent human beings every year,” she said. “I would hope that fact alone would keep urgency burning in the hearts of all those who call themselves pro-life.”

The US Senate yesterday voted down a bill backed by pro-life Republicans that would ban abortion after 20 weeks of pregnancy. The decision comes a little over a week after the House, which had already passed its version of the 20-week ban last year, passed a bill to ensure medical care for babies born alive during abortion procedures.