If trends continue, North Korea will no longer be the world’s worst persecutor of Christians.
Sarah Eekhoff Zylstra|January 10, 2018 09:00 AM
Image: Open Doors
The Top 50 Countries Where It’s Most Dangerous to Follow Jesus ...

Editor’s note: The 2022 World Watch List has been released, and CT offers results and analysis in 10 languages.

For decades, North Korea has clearly been the world’s worst persecutor of Christians. But now, another nation nearly matches it.

Open Doors released today its 2018 World Watch List (WWL), an annual ranking of the 50 countries where it is most dangerous to follow Jesus. Approximately 215 million Christians now experience high, very high, or extreme levels of persecution; that means 1 in 12 Christians live where Christianity is “illegal, forbidden, or punished,” according to Open Doors researchers.

Kim Jung-un’s country hasn’t moved from the No. 1 spot on the list for 16 years in a row. “With more than 50,000 in prison or labor camps, such a ranking is little surprise for the totalitarian regime that controls every aspect of life in the country and forces worship of the Kim family,” Open Doors reported.

But rivaling it this year is Afghanistan, which ranked No. 2 by less than a point. North Korea’s total score was 94 (on a 100-point scale), pushed above Afghanistan’s 93 by a 0.6 difference in their violence rating. In the other five categories measured—private life, family life, community life, national life, and church life—both countries received the worst scores possible.

“Never before have the top two countries been so close in incidents,” Open Doors USA president and CEO David Curry stated. “Both countries are extreme in intolerance and outright persecution of Christians in every area Open Doors monitors.”

The rising persecution in Afghanistan “is a tragedy considering the efforts being made by the international community to help rebuild Afghanistan are failing to ensure freedom of religion,” stated Curry. “Reports of violence and human rights atrocities from North Korea are pervasive, while the situation faced by Christians in Afghanistan may be underestimated. It is hard for Westerners to imagine a second country could nearly meet the levels of persecution seen in North Korea, but Afghanistan has reached that level this year.”

Where Is Persecution the Most Violent?

Trailing a few spots behind at No. 5, Afghanistan’s neighbor Pakistan recorded the most violence against Christians last year. The country also scored the highest in church attacks, abductions, and forced marriages, according to Open Doors.

It also recently drew the ire of President Donald Trump, who last week cut off Pakistan’s military aid over frustrations with alleged Pakistani assistance given to terrorists in Afghanistan. The same day, the US State Department announced the addition of Pakistan to a new “special watch list” of governments or entities that “engage in or tolerate” severe religious freedom violations, yet aren’t bad enough to be named a “country of particular concern.” 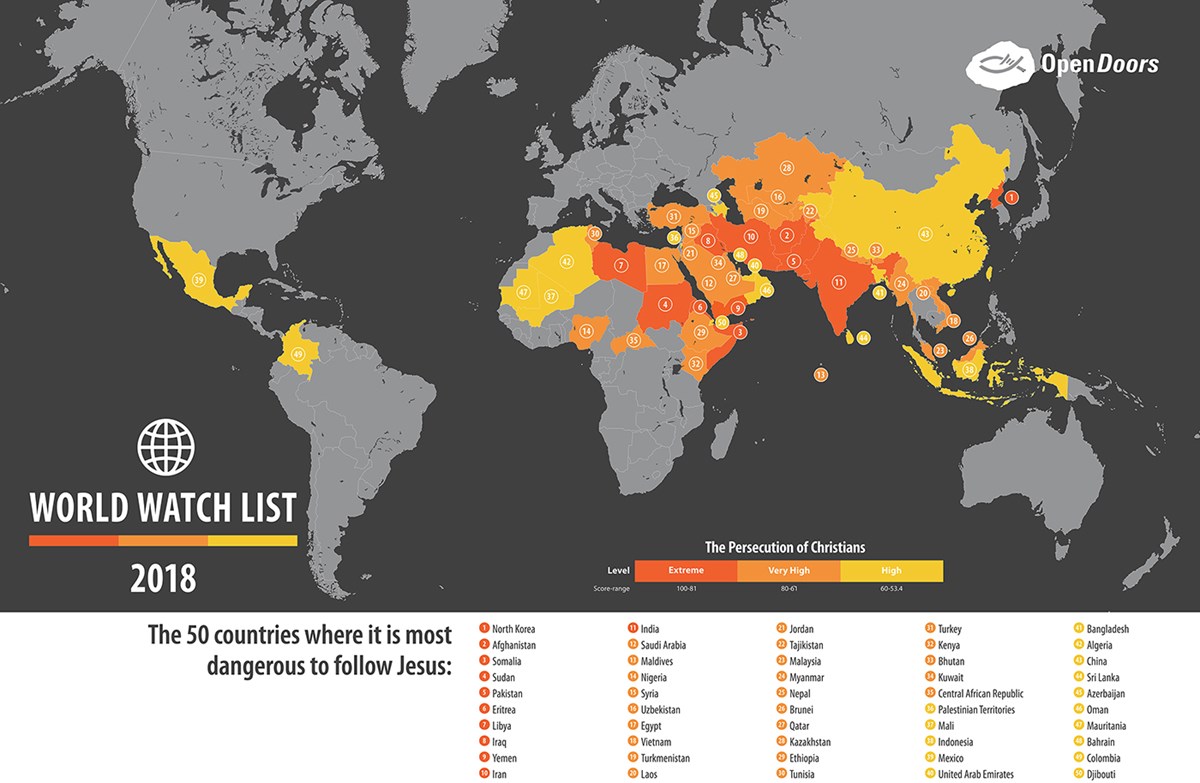 What’s the Biggest Threat to the Persecuted Church?

It’s not a coincidence that all of these countries—except North Korea and Eritrea—are predominately Muslim. In fact, “Islamic extremism remains the global, dominant driver of persecution, responsible for initiating oppression and conflict in 35 of the 50 countries on the list,” Open Doors stated.

The Islamist movement is “the part of Islam which embraces a clear political agenda for bringing nations under Muslim domination and shari‘ah law,” according to Open Doors. The movement has three parts: individuals and networks that use violence to advance their political goals; those who reject any system based on non-Islamic law but who aren’t violent; and those who interact with society by voting or campaigning for Islamic law.

One example: “Every day six women are raped, sexually harassed, or forced into marriage to a Muslim under threat of death due to their Christian faith,” Open Doors reported. This number is likely low, since it includes only reported incidents. It also points to the double persecution—for both their gender and religion—that Christian women face in much of the world.

The majority of the countries on the list saw an overall increase in persecution from 2016 to 2017 (30 of 50). Five of the six countries where persecution increased the most were majority-Muslim, with the notable exception of India, which moved from No. 15 in 2017 to No. 11 in 2018.

What’s the Newest Threat to the Persecuted Church?

“Radical Hinduism and Indian nationalism are driving factors in the increasing levels of unrest and instability Christians face,” Open Doors reported. “In 2014, India scored only 55 points, while during the 2018 reporting period, [WWL] researchers assigned 81 points to the nation—one of the fastest and most intense increases seen.”

Under Modi, religious freedom violations against Christians—such as social exclusion, abuse, and imprisonment—have spread unchecked. In 2017, Open Doors counted more than 600 persecution incidents, though “most cases actually remain unreported, so the true number is much higher,” the organization said. (At the same time, Compassion International’s 589 Indian centers serving 145,000 children were shut down without explanation.)

India’s religious nationalism has swelled over its borders, spilling into neighboring Nepal and catapulting that country onto the list—and halfway up it, at No. 25. In October, Hindu-majority Nepal took aim at evangelism by criminalizing religious conversion; the Pew Research Center has noted increasing social hostility there as far back as 2015.

Buddhist nationalism in countries such as Sri Lanka (No. 44), Bhutan (No. 33), and Myanmar (No. 24) is less obvious but still there. Parents have to send their children to Buddhist schools, where children must learn about Buddhism and participate in its rituals, Open Doors said. And Christians often are refused permits to rent a place to hold worship services.

Nearby Vietnam (No. 18) and China (No. 43) can also be hard places for Christians—not because of religious nationalism, but because Communism sees religion as an “opium for the masses” that should be eliminated.

In Vietnam, levels of violence dropped, but that didn’t lead Open Doors to optimism. “While it is good that no Christians died for their faith in Vietnam, the authorities continue to crack down on ethnic minority Christians and will start implementing a new law on religion in 2018 for all Christians.”

Any Good News for the Persecuted Church?

In addition to Nepal, Azerbaijan joined the list this year (No. 45). They replaced the sub-Saharan African countries of Comoros and Tanzania, which ranked No. 42 and No. 33 respectively in 2017.

“Tanzania is the most eye-catching example of a country where the situation for Christians considerably improved,” Open Doors said. The majority-Christian country was struggling against a Muslim minority that was growing more radical when President John Magufuli was elected in 2015.

“His administration made serious work of cracking down on radical Islamic groups,” Open Doors said. “Many leaders were caught and others went into hiding. The violence against Christians decreased a lot.”

Tanzania was the best case of improvement. Though scores in Ethiopia (No. 29) and Kenya (No. 32) both dropped due to Muslims and Christians finding common ground in politics, both nations also saw more violence.

Ethiopia’s violence was directed against both Muslims and Christians who were protesting the government, asking for more democracy and an end to corruption. In Kenya, the radical al-Shabaab Islamist group killed more than 30 Christians, beheading many. “This seems to be a new tactic to instill fear in the Christian community and get them to flee en masse,” Open Doors noted.

Syria is another country where fewer reports of violence against Christians were hardly cause for celebration. While it dropped from No. 6 to No. 15, and while ISIS has lost most of its territory, accurate persecution numbers are hard to get from the war-torn country. In addition, many of the country’s Christians have already fled.

“Anti-Christian violence has not disappeared,” Open Doors said. “There were still Syrian Christians being abducted, physically and sexually abused, fleeing their homes and country.”

Open Doors’s rankings came out a week after the State Department released its list of countries of particular concern—those that have “engaged in or tolerated particularly severe violations of religious freedom.”

The Top 50 Countries Where It’s Most Dangerous to ...