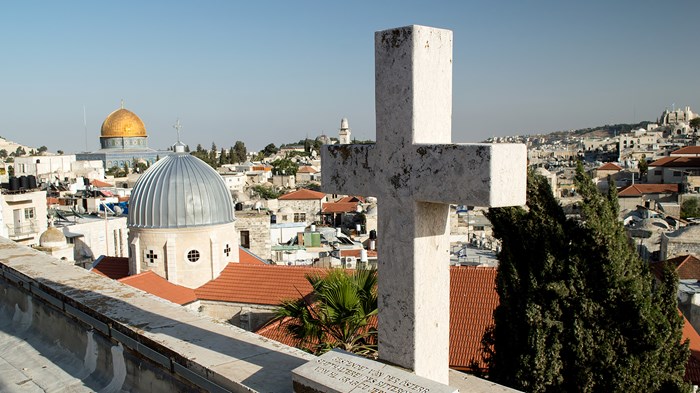 In a legislative act both obvious and inflammatory, this month Israel cemented its nature as a Jewish state.

What this means for its Palestinian Christians and Messianic Jews is left unclear.

By a narrow vote in the Knesset, Israel’s legislature, the law entitled “Basic Law: Israel as the Nation-State of the Jewish People” was adopted to serve alongside over a dozen other “basic laws” that serve as Israel’s de facto constitution.

A key clause states that national self-determination is “unique” to Jews. Other provisions formally establish the nation’s flag, emblem, and anthem. Jerusalem is confirmed as the complete and united capital. The Sabbath and Jewish festivals are declared official days of rest.

But two other clauses have raised considerable concern. Jewish settlement is a “national value” to be promoted. And Arabic is downgraded from an official language to one with “special status.”

“This law outlines that Israel’s democratic values are secondary for non-Jews,” said Shadia Qubti, a Palestinian evangelical living in Nazareth. “It sends a clear message that my language is not welcome and consequently, neither is my cultural and ethnic identity.”

Her fears are echoed by an Israeli lawyer.

“While the idea of the law is straightforward—it’s hard to argue that Israel isn’t a Jewish state—the actual provisions are controversial, discriminatory, and possibly racist,” said Jaime Cowen, former president of the Union of Messianic Jewish Congregations.

Today the Latin Patriarchate of Jerusalem also denounced the law as “a cause of great concern” because Palestinians, who make up 1 in 5 Israeli citizens, are “flagrantly excluded.”

“The Christian citizens of Israel have the same concerns as any other non-Jewish communities with respect to this Law,” the Catholic leadership stated. “They call upon all citizens of the State of Israel who still believe in the basic concept of equality among citizens of the same nation, to voice their objection to this law and the dangers emanating thereof to the future of this Country.”

Israel lacks a constitution, so its Declaration of Independence has long served as a reference point for law. It promises “full and equal citizenship” to all inhabitants, with a special appeal made to Arabs.

Other basic laws outline the democratic nature of Israel and its institutions. Though the precedence of basic laws over other laws is not formally established, they have never been overturned by Israel’s Supreme Court.

But in recent years, Cowen explained, right-wing political parties grew frustrated with the Supreme Court, which struck down laws undermining the democratic nature of the state. By creating a new basic law, Jewish nationality is prioritized while no mention is made of equality.

“How this new law will affect the democratic character of the country remains to be seen,” he said.

“Very little of Israel’s new Nation-State Law is actually new,” wrote Robert Nicholson, executive director of The Philos Project, in a Providence journal article analyzing how the law and a similar 2003 Palestinian one only make sense within a two-state solution. “The mere statement that Israel is the nation-state of the Jewish people is hardly novel; it’s what Israelis have been saying since 1948. In fact, the best critique of the law may be that it doesn’t really do anything besides stir up unnecessary trouble.”

Arab lawmakers in the Knesset voiced their strong convictions. Many cried out “Apartheid!” following the 62-55 majority vote, and ripped up copies of the bill.

First proposed in 2011, the basic law draft was contested strongly by left-wing Jewish groups. But with its passage, sponsoring Knesset member Avi Dichter celebrated within his original vision.

“We are enshrining this important bill into a law today,” he told Ynet News, "to prevent even the slightest thought, let alone attempt, to transform Israel to a country of all its citizens.”

“We enshrined in law the basic principle of our existence,” he said. “Israel is the nation state of the Jewish people, that respects the individual rights of all its citizens.”

One clause in the bill protects the right of non-Jews to their religious holidays and days of rest. Christians have been legally divided from Muslims as a minority community since 2014, and represent roughly 160,000 of Israel’s 20-percent Arab population. Their self-identity as Israeli citizens has been rising.

“I don’t agree with those saying this is an apartheid law,” Amir Fuchs, an expert in legislative processes and liberal thought at The Israel Democracy Institute, toldThe New York Times. “It does not form two separate legal norms applying to Jews or non-Jews.

“[But] even if it is only declarative and won’t change anything in the near future,” he said, “I am 100 percent sure it will worsen the feeling of non-Jews and especially the Arab minority in Israel.”

Botrus Mansour, co-chair of the Lausanne Initiative for Reconciliation in Israel-Palestine (LIRIP), is one such individual. “God created us equal in His image, and laws that contradict that do not please him,” he said.

“Christians and Muslims have had freedom of worship, and that will not change,” said the Palestinian general director of Nazareth Baptist School. “But the existing discrimination against them as Palestinians will have additional legal backing, and be a platform for more racist laws against Arabs.”

Also a lawyer, Mansour agrees that the law itself mainly declares the existing realities. But some of its provisions push Israel’s Jewish nature a few steps further.

The law’s treatment of the Arabic language is an example. The text declares its “special status” does not harm its prior status, but hereafter only Hebrew is “official.”

“Democratic countries take measures to include all their citizens and promote their sense of belonging,” Mansour said. “But with this law, Israel is choosing to alienate its indigenous Palestinian minority.”

Another example of pushing forward Jewish realities is the law’s settlement clause, said Qubti, who produces a podcast called “Women Behind the Wall” to promote female Palestinian perspectives.

She sees the ongoing and extensive enclaves in the West Bank as part of a national effort to Judaize Palestine that is now made legal. Meanwhile, Arab cities and villages are overcrowded, even as some homes and neighborhoods suffer demolition.

“The law simply codifies my status as a second-class citizen,” she said.

However, the settlement clause was watered down from its original version in order to secure passage. A previous draft would have permitted the creation of Jewish-only communities.

“I am thankful this was removed from this legislation,” said Lisa Loden, the Messianic Jewish co-chair of LIRIP. “Had it remained, it would give credence to claims that Israel is increasingly racist and would legalize discriminatory policies.”

But what is most “alarming” about the approved text is the absence of any mention of minority rights. While this affects all non-Jews, it may also affect her particular community.

But they are in agreement about the possible dangers.

A clause in the basic law commits the state to strengthening ties with world Jewry and promoting immigration to Israel. Messianic Jews, Cowen said, are already discriminated against in this regard, as religious authorities view them as non-Jews because of their faith in Jesus.

But Cowen fears the emphasis in the new law on nationality may extend discriminatory treatment of Messianic Jews to housing, jobs, and the right to build congregations.

“This new law may prove highly problematic,” he said. “The current government is not a friend of Messianic Jews.”

And according to the democracy index V-Dem, Israel has been in a steady decline over the past decade. The often-cited “only democracy in the Middle East” now ranks behind Tunisia in overall score and confidence, reported the Times.

“By passing this basic law, the foundations of democracy are undermined,” said Loden. “As a citizen of the country and as a member of a minority group, I am deeply concerned for the future of civil rights and equality in Israel.”

Under the Law: Israeli Christians Worry About ...