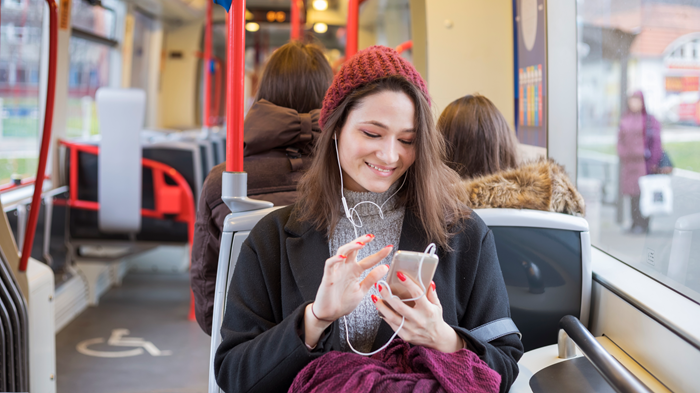 Sociologist Sherry Turkle blames devices for stealing away our eye contact. The moments Americans used to spend face-to-face—everywhere from riding on public transit to sitting at the dinner table—have been obstructed by smartphones, in many cases virtually eliminating the opportunity for spontaneous conversation.

Eager evangelists, the kind of people who like to talk with neighbors and fellow passengers on airplanes, may find that their chances for chit-chat increasingly get shut down by others’ chronic screen time.

This year, when Barna Group set out to capture the state of spiritual conversations in America, researchers had to zero-in on the impact of technology: Has talking about faith become harder or easier in the digital age? How do our online habits impact Christians’ opportunities to speak about their beliefs or to share the gospel?

A majority of Christians have noticed the struggle to have in-person conversations, Barna found, and—like in Turkle’s research for her 2015 book Reclaiming Conversation—it’s actually the younger generations that are most acutely aware of the challenge. 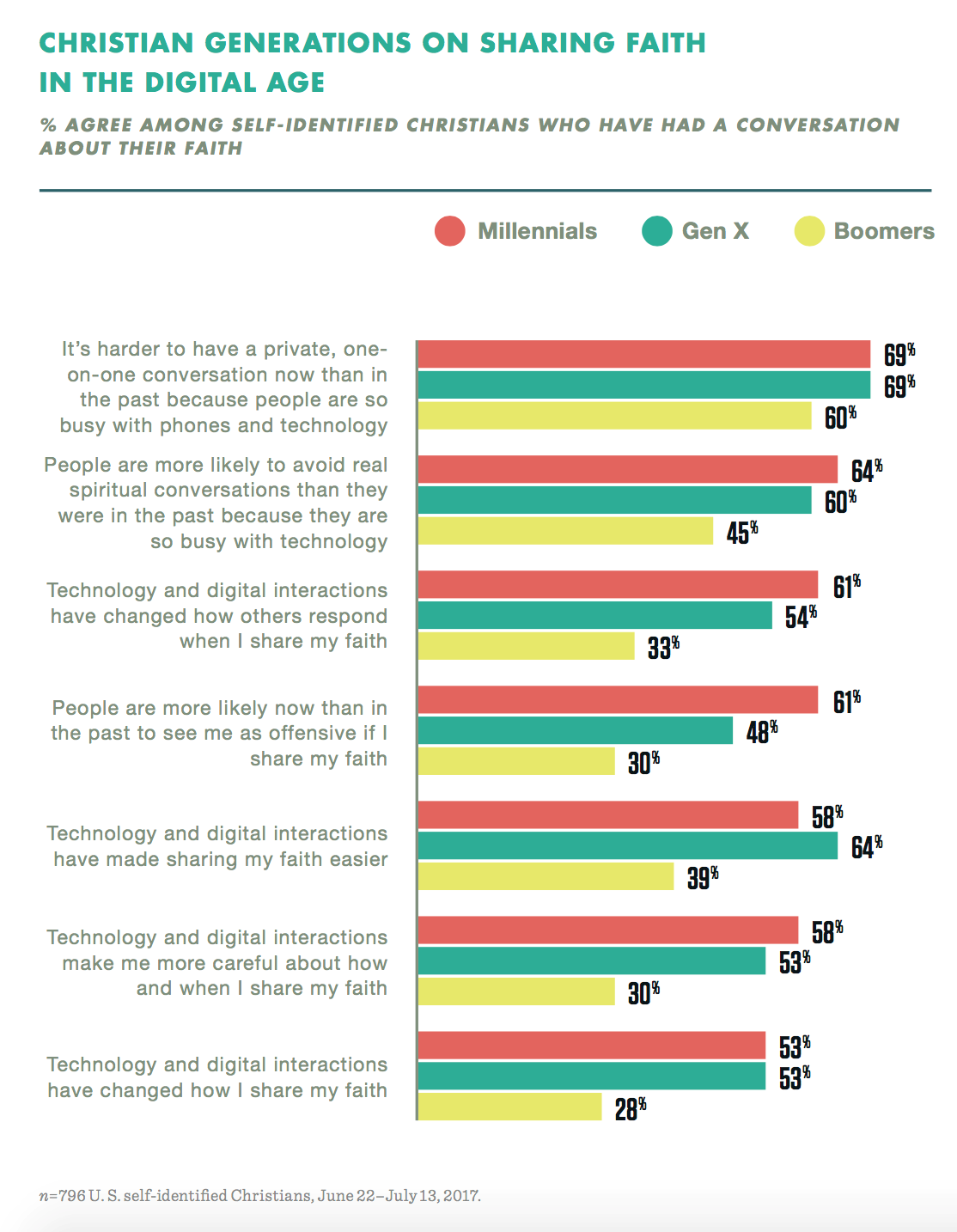 About 7 in 10 millennial and Gen X Christians (69%) and 6 in 10 Boomer Christians (60%) say it’s harder to talk with people one-on-one since they’re so busy with their phones. Meanwhile, just over half of Christians overall (55%) agree that technology has prompted others to avoid spiritual conversations, with millennials (64%) and Gen Xers (60%) most likely to feel the shift.

Millennials, now aged 20-34 in the Barna breakouts, experience the most pressure over bringing up their faith. They are the most likely to say digital interactions have made them “more careful” (58%) about talking about faith and to worry about their faith being seen as offensive (61%), according to the survey. (Youth ministry leaders, including groups like the Fuller Youth Institute, have recently developed resources specifically addressing the unique evangelism challenges teens and young adults face online.)

But some of the topics of conversation that Americans tend to avoid in person have migrated onto social media—for better or for worse. More than half of Christians also say “technology and digital interactions have made sharing my faith easier,” and many are taking advantage of platforms like Facebook and Twitter to do so.

Barna discovered that practicing Christians are more likely than non-Christians and American adults overall to be on major social media platforms, where they regularly identify, discuss, and share their beliefs. 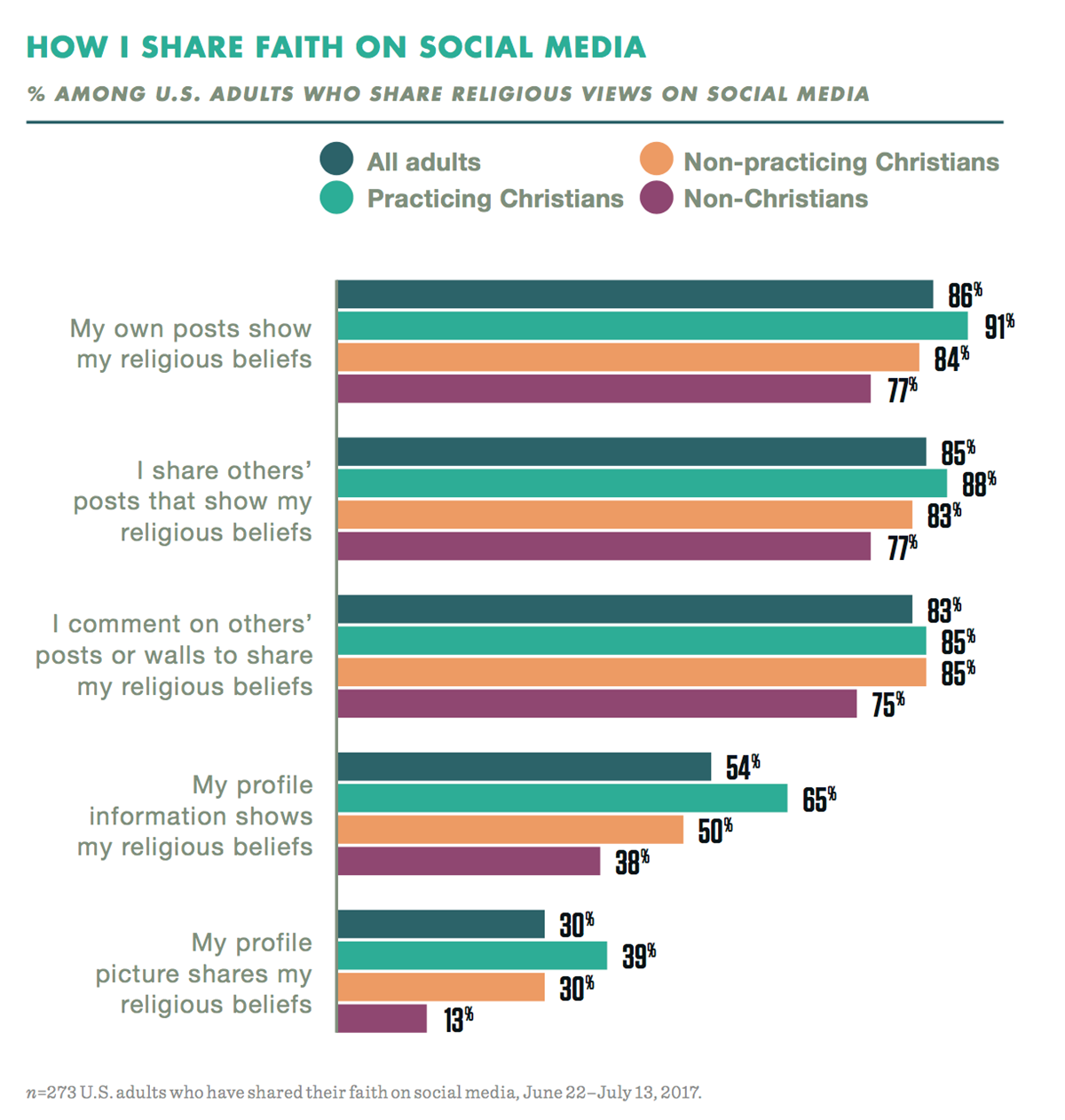 The most popular strategies for bringing up faith are writing posts, sharing others’ posts, or commenting.

Seeing the potential for social media to impact evangelism efforts—for better or for worse—several Christian and denominational groups have issued advice for best practices for believers on Facebook.

The Seventh-day Adventist Center for Online Evangelism similarly encourages Christians to consider the language and tone they use to share their faith on social media. The group suggests they avoid Christianese jargon or “doctrine-dousing” that could be confusing to non-believers.

Also among their social media no-no’s: firing off heated, un-Christlike comments to posts you disagree with and sharing chain-letter style memes (“Share if you love Jesus. Keep scrolling if you love Satan.”).

And yes, Barna did find evidence that Christians’ conversations on social media are having an impact: 58 percent of non-Christians said someone had shared their faith with them on Facebook and another 14 percent through other social media channels.