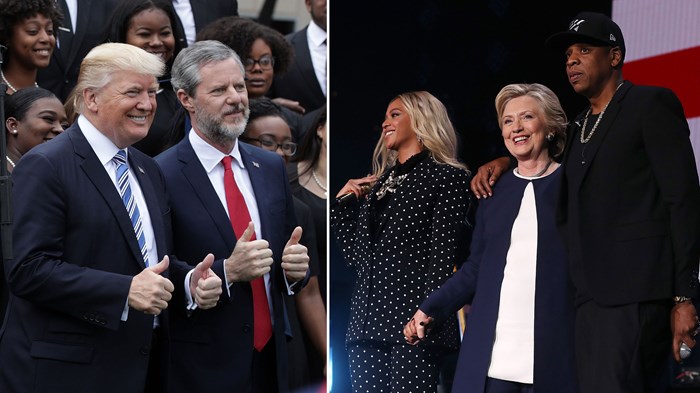 According to Morning Consult, endorsements by prominent religious leaders hold more clout with self-identified US evangelicals than those by other celebrities, but still aren’t as impactful as endorsements by other politicians themselves.

Evangelicals were most likely to heed recommendations by top leaders from recent administrations; nearly half (49%) said Trump’s endorsement would make them more likely to vote for a particular candidate, more than any other figure. 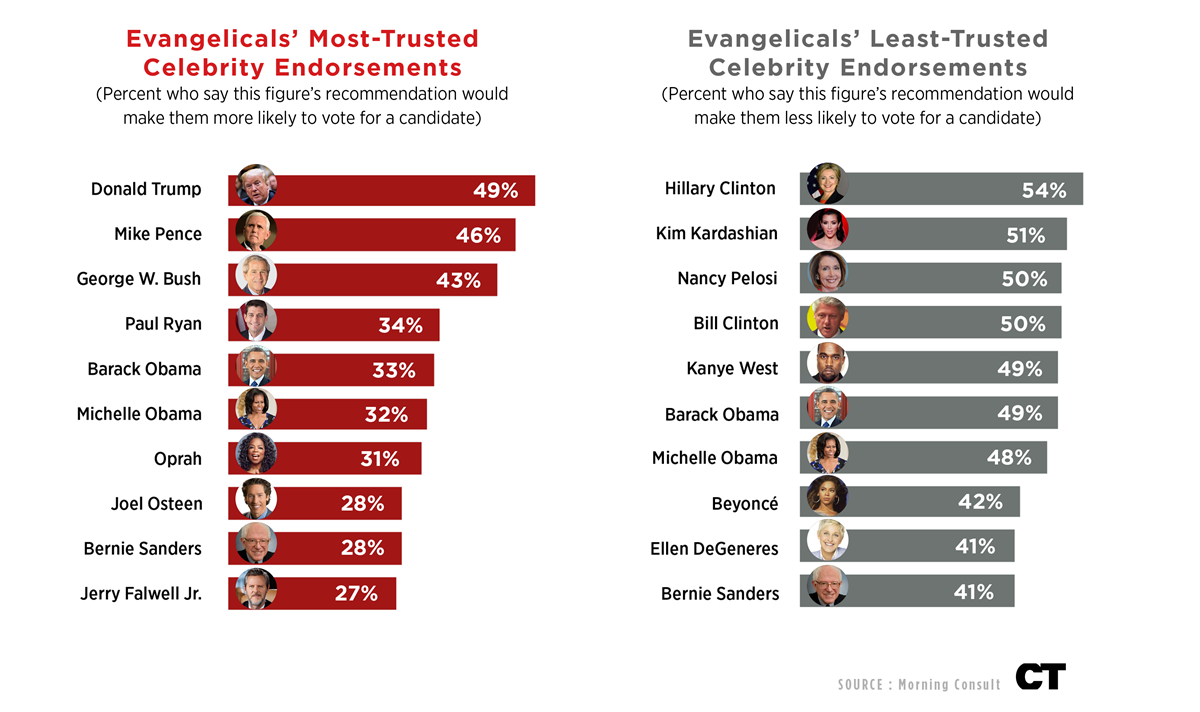 (Editor’s note: Morning Consult’s survey, conducted online from February 28 to March 2, relied on a multiethnic sample of 565 evangelicals for its questions for all current and former US presidents (and spouses) in the survey, while questions on other celebrities had smaller sample sizes and thus larger margins of error.)

Pope Francis, Osteen, and Falwell Jr. were the only religious figures in the poll. During the 2016 campaign, Osteen called Trump “a friend of our ministry” and “a good man,” while Falwell Jr.—president of Liberty University and son of the late Moral Majority leader Jerry Falwell—was among the first evangelicals to officially endorse him.

Trump—who according to Morning Consult/Politico currently holds a 59 percent approval rating among evangelical registered voters, compared to 43 percent among voters overall—has pledged to repeal the Johnson Amendment and give US pastors more freedom to address candidates from the pulpit.

Among voters overall, politicians held the most clout (either positive or negative), followed by a few pundits, business leaders, and certain celebrities. Americans pay more attention to what Osteen or Falwell Jr. says than the Pope, but the two still aren’t as influential—for better or worse—as Oprah, Ellen DeGeneres, or Kanye West.

Half or more said endorsements by Hillary Clinton (54%), House Minority Leader Nancy Pelosi (50%), or President Bill Clinton (50%) would make them less likely to support a candidate. They came down about as negatively on endorsements by Kim Kardashian (51%) or Kanye (49%).

Fellow entertainers Beyoncé and Ellen also fell among evangelicals’ 10 most damaging endorsements. Only about 1 in 5 evangelicals cares what The Rock had to say either way; celebrities such as Tom Brady, LeBron James, Mark Zuckerberg, and Taylor Swift also fell relatively low on their lists.

A few liberal politicians were polarizing enough to rank among both the best and worst endorsements for evangelicals: Barack Obama, Michelle Obama, and Senator Bernie Sanders. About a third of evangelicals see endorsements by the Obamas as a plus, while just under half view them negatively.

A LifeWay Research study released last year similarly found that despite the popularity and political activism held by celebrities, Americans continue to look to politicians to lead conversations on important issues.

A plurality (21%) said the President had the best chance of fostering healthy conversations among the American people, with 1 percent or less turning to other famous folks to do so. “Musicians or athletes get a great deal of attention for their public statements about the issues, but few Americans seem to look to them as thought leaders,” said Scott McConnell, executive director of LifeWay Research.

Though over a third of Americans with evangelical beliefs (36%) have faith in pastor as thought leaders on major issues, evangelicals aren’t that eager to hear candidate endorsements at church. In an earlier LifeWay survey, conducted during the 2016 campaign, 73 percent of evangelicals by belief thought pastors should abstain from pulpit endorsements.

Under the Johnson Amendment, which Trump still hopes to repeal, certain political speech by nonprofits including churches could lead to them losing their tax-exempt status. Only 33 percent of evangelicals by belief want churches to face punishments if they do endorse candidates.

More churchgoers heard endorsements for Clinton in 2016 than Trump, according to Pew Research.