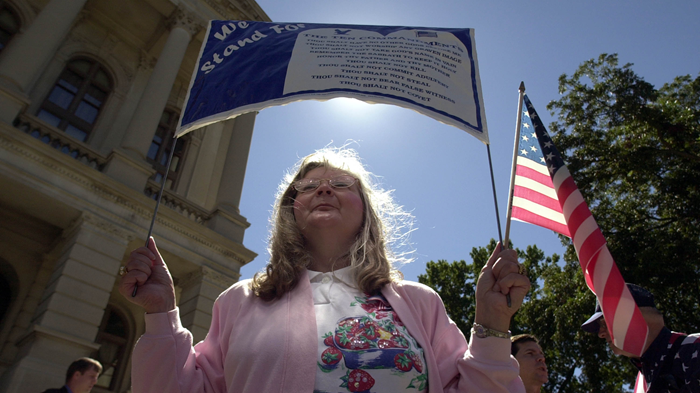 As Americans look for better strategies to prevent gun violence, pastor Robert Jeffress recently told Fox News that the first step should be instructing children to obey God and his commandments.

“Teaching people, starting with our children, that there is a God to whom they’re accountable is not the only thing we need to do to end gun violence, but it’s the first thing we need to do,” said Jeffress, pastor of First Baptist Church of Dallas and an evangelical adviser to President Donald Trump, ahead of his church’s “March for Eternal Life” on Palm Sunday. The day before, dozens of “March for Our Lives” events across the US advocated for more gun control.

Jeffress lamented the 1960s Supreme Court rulings that declared daily teacher-led prayer and Bible readings in school unconstitutional. “For the first 150 years of our nation’s history, our school children prayed. They read Scripture in school. They even memorized the Ten Commandments—including the commandment, ‘Thou shalt not kill,’” he said.

Even without such religious activities in public schools, Americans across faiths continue to ascribe to the set of God-given guidelines that make up the foundation of Jewish and Christian morality.

A new survey by YouGov and Deseret News found that half or more of US adults view each of the commandments as important to live by, with “you shall not commit murder” ranking at the top.

The survey, part of an ongoing Deseret News series on the Ten Commandments, was conducted March 10–13 among a nationally representative sample of 1,250 US adults. The margin of error is +/- 3.1 percent, and higher among subgroups.

Overall, 94 percent of Americans and 99 percent of evangelicals believe the commandment against murder remains significant. 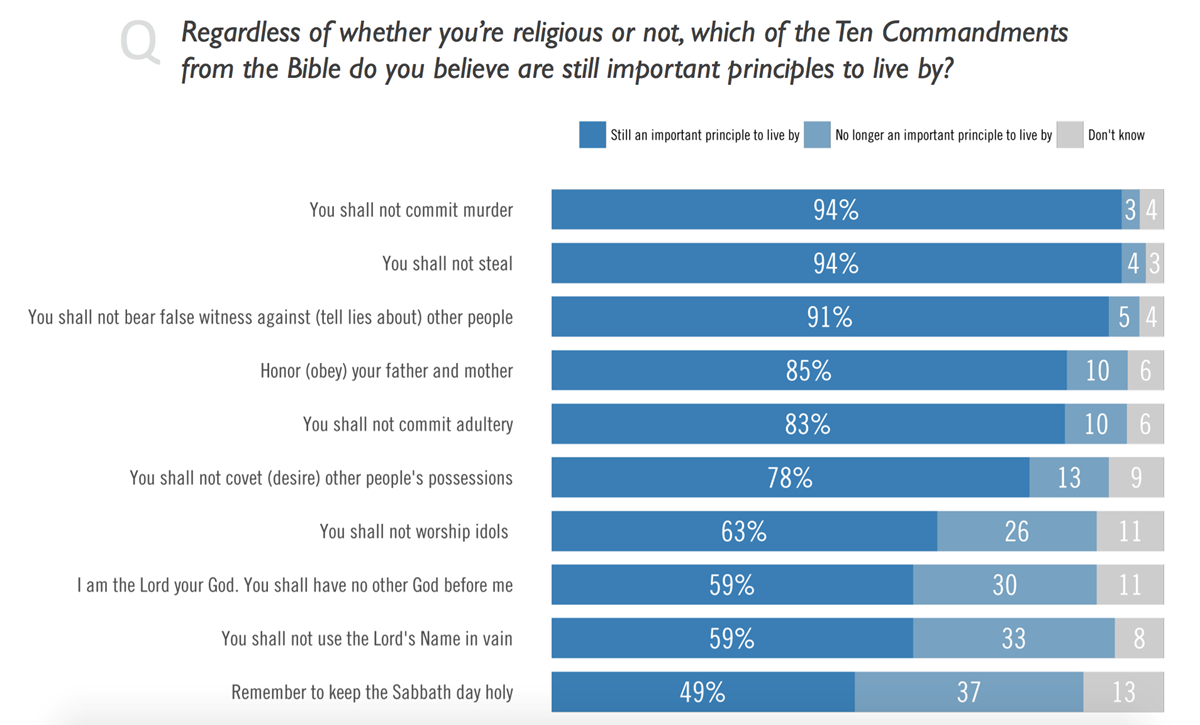 Evangelicals were more likely than the average American or members of other religious groups to be concerned with following each of the Ten Commandments. 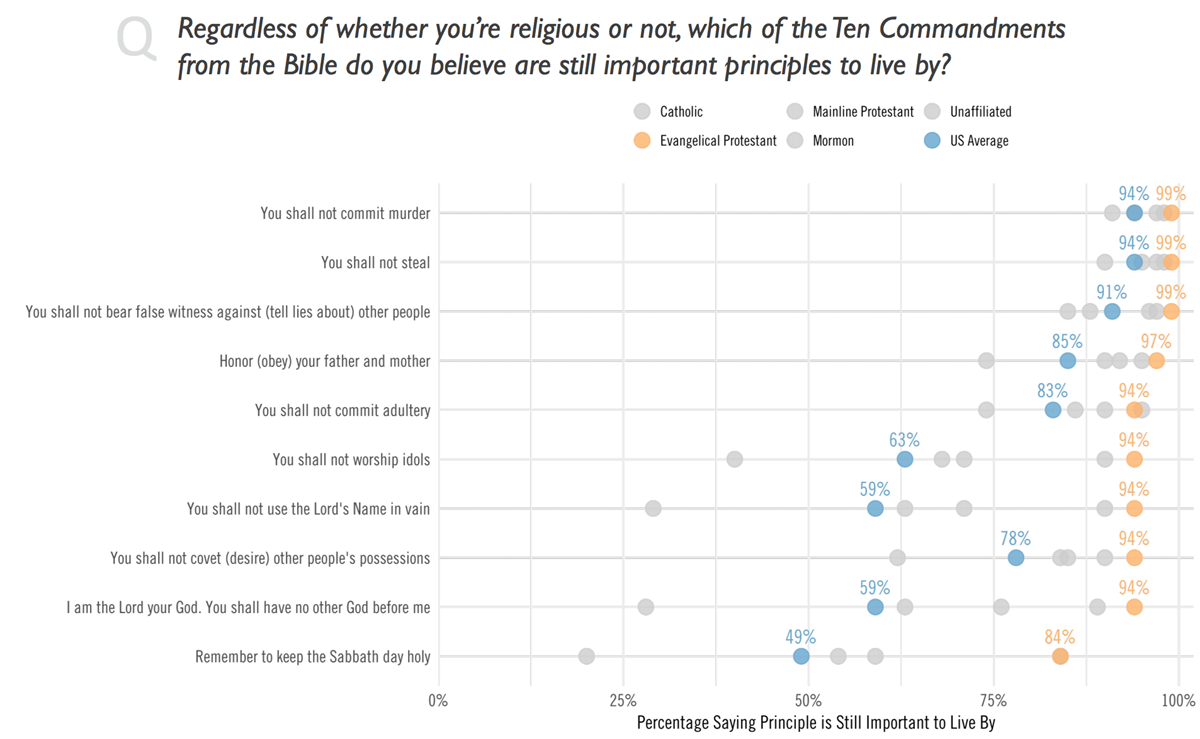 Americans held the Ten Commandments in higher esteem than respondents to a similar YouGov survey conducted in the United Kingdom, where adults were less than half as likely to still believe in the commandments regarding worshiping idols, the Lord as God, using the Lord’s name in vain, and observing the Sabbath. 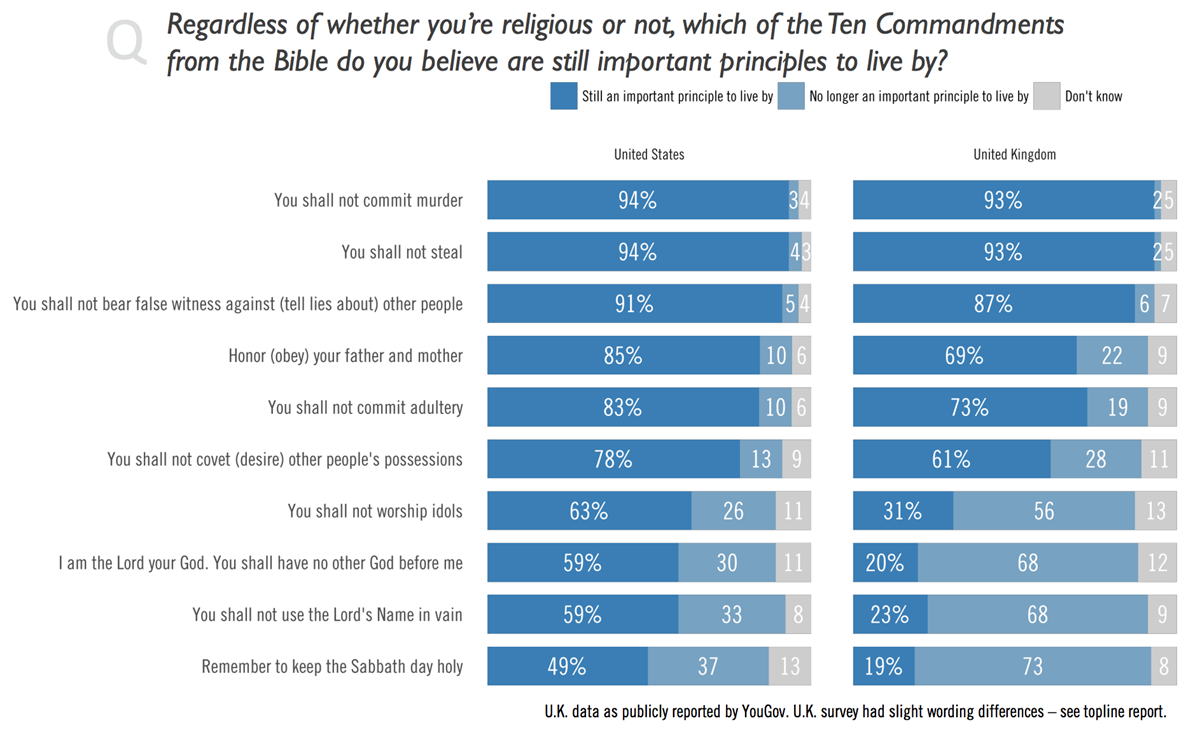 Last year, a YouGov and Deseret News survey found that while white evangelicals had stricter standards for adultery and cheating, they grew more accepting of politicians who had extramarital affairs. In 2017, 53 percent said it “wouldn’t matter,” compared to 42 percent the year before.

In this year’s survey, Americans came down hard on lying to a spouse or partner about an affair, with 95 percent of evangelicals and 87 percent of all adults saying that would never be okay.

Yet, Americans overall grew more accepting of lying in politics. When asked, “If you agree with a candidate on most issues, yet believe they are sometimes less than honest and would lie to cover up the truth, would you still vote for that person or would that be a deal breaker for you?,” 36 percent of respondents said they would still vote for the candidate, compared to just 23 percent the year before. 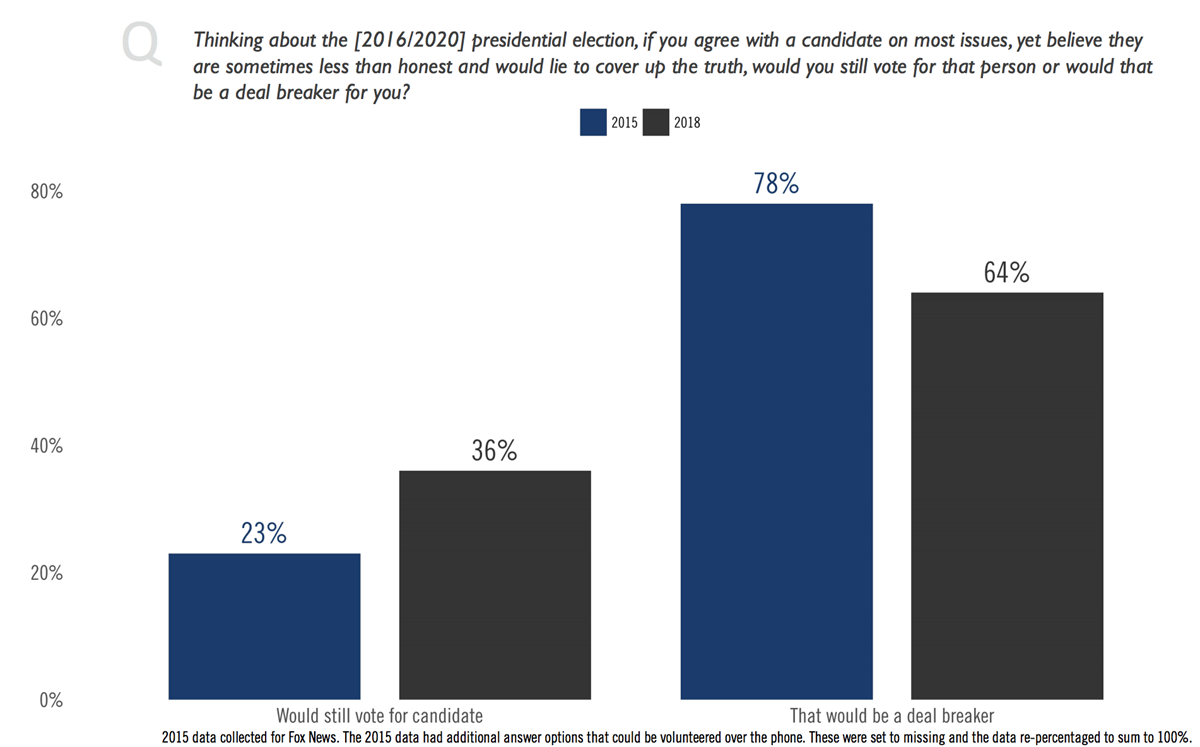 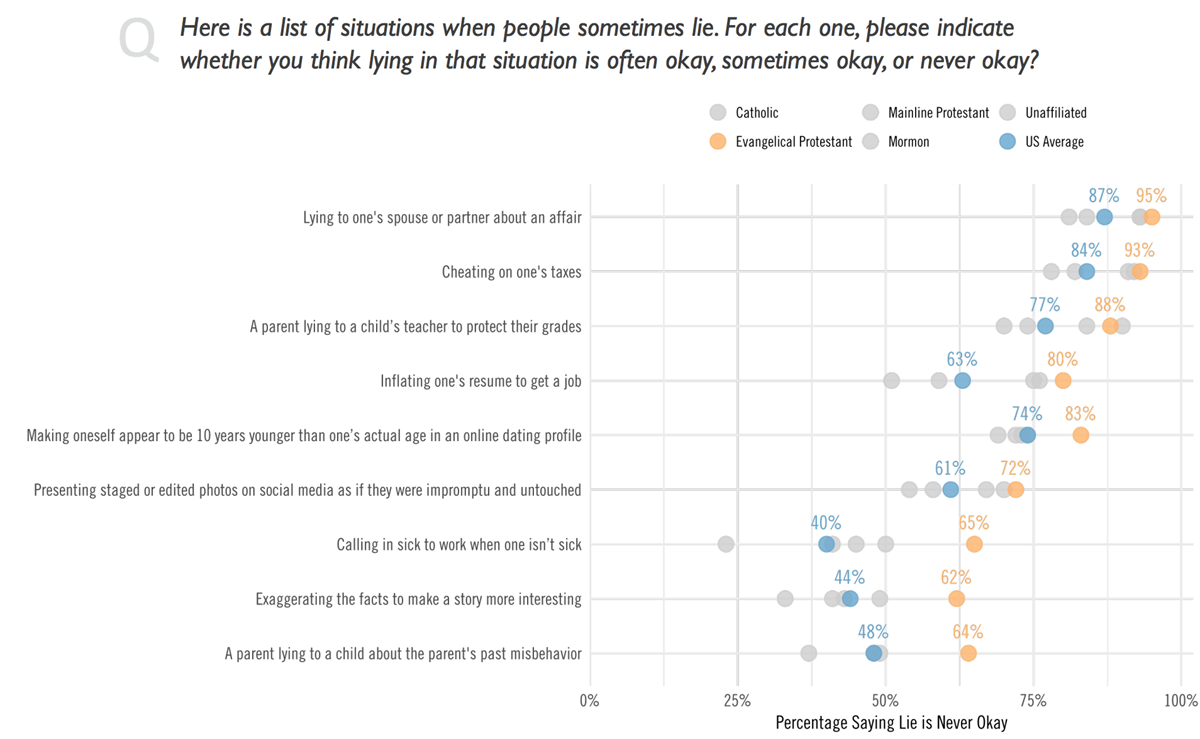 Christians have debated whether there are acceptable situations to lie, and whether deceit could serve a good purpose. The late theology professor Allen Verhey addressed the question for Christianity Today in 1999, saying:

Devotion to God should lead us to speak the truth, to love the neighbor, to serve life. In this sad world, however, sometimes we find ourselves in situations where to speak the truth may harm a neighbor, or where a lie (as in Rahab's story) may be necessary to preserve the life of a neighbor. (Even the instruction not to "bear false witness" in the Ten Commandments is put in the covenant context of not harming one's neighbor.) We live the truth not for its own sake, but for God's sake and for the neighbor's sake.

CT also covered the different “levels of lying,” including Christians’ tendency to downplay their “white lies.”