The body of Christ is breaking in Israel amid Jerusalem embassy move and Gaza border violence.
Jayson Casper|May 21, 2018 11:16 AM 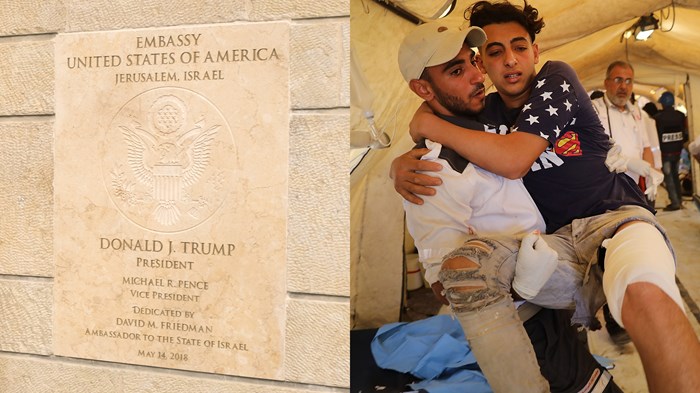 Hanna Maher’s wife is nine months pregnant, due any day now, with only four hours of daily electricity. Her two older boys scurry about in the dark, kept ignorant by parents about the dead at the border.

But it is hard to be ignorant in Gaza.

A Norwegian charity estimates 56 percent of children in the Palestinian territory suffer from traumatic nightmares. Suicide, rarely seen culturally, is a growing concern. Maher, an Egyptian-born Baptist pastor, says some at the border see death as the best option.

Two million people are squeezed into a coastal strip roughly the size of Philadelphia. Exit is severely restricted on one side by Israel. The waiting list into Egypt is 40,000 names long.

Unemployment is over 40 percent. Clean drinking water is hard to come by. And on May 14, as tens of thousands massed near a chain link fence demonstrating for their “Right to Return,” Israeli snipers picked off dozens.

“Monday was a hard day. But at least it is quiet now,” Maher said. “It has been bad for years. But conditions now are the worst I have seen.”

Maher went to Gaza in 2011, and married his local Palestinian wife a year later. His congregation is the strip’s only evangelical church, with about 60 regular members. Overall, Gaza’s Christian population is about 1,000, mostly Greek Orthodox; in the last 10 years, it has declined by a third.

Maher provides food aid to about 120 families. His marriage preparation classes are a crash course in how to nurture a family amid poverty.

And he says local Christians are critical of just about everyone.

They did not go to the protests, seen as a Hamas initiative. The Palestinian Authority hasn’t paid salaries in months, trying to pressure Hamas. And Israel, says Maher, only lets in enough goods to keep people alive.

But being critical, Christians still try to speak. They oppose the transfer of the US embassy to Jerusalem. They demand the UN-mandated right to return to Israel for Palestinian refugees.

“And they call out,” says Maher, “‘Where is the world community?’”

The answer: debating who is to blame.

The Europe Union asks for an independent inquiry. The 57-member Organization of Islamic Cooperation wants a protection force. The US praises Israeli restraint.

But 60 miles northeast toward Jerusalem and the West Bank, the Gaza violence also divides Israeli and Palestinian Christians.

“What is happening in Gaza is a human disaster of epic proportions,” said Lisa Loden, a Messianic Jew and co-chair of the Lausanne Initiative on Reconciliation in Israel-Palestine.

“Israel is not entirely responsible for this situation. But she bears much of the responsibility for the ongoing suffering of Gaza and her people.”

Loden views the US embassy move as an “impediment to peace,” and believes the Gaza protests were a “peaceful initiative” only later joined by Hamas.

It is hard to control the handful who had weapons and tried to cross the border, she said, but the Israeli response was disproportionate. Beyond the dozens killed, thousands were injured.

The context is important, Loden believes. “The people of Gaza have lost hope and are acting out of desperation.”

Her views are shared by a small minority within the Messianic Jewish community, Loden freely admits. Far more common are those of David Friedman, rabbi and former dean of King of Kings College in Jerusalem.

“This media ploy is inhumane,” he said. “It knowingly involved Hamas operatives and sympathizers getting killed while obeying orders to storm Israel’s borders.

“No country in the world would allow this to occur.”

Hamas leaders have stated that most of the dead are their members, and that they encouraged crossing the border. They could have launched rockets, but wished a propaganda victory to focus on Gaza suffering rather than the embassy opening.

Friedman believes the widespread suffering is a result of Hamas mismanagement. But in addition to this US-designated terrorist entity to the southwest, Israel faces Iran and Hezbollah entrenching themselves on its northeast border with Syria.

“Israel is the underdog nation, surrounded by a sea of jihadist-inspired hatred,” he said. “Her anti-Semitic enemies will try to use any event to attack the world’s only Jewish state.”

Meanwhile, he said, the embassy move harms no one. It even makes an easier commute for American diplomats and their employees, including Palestinians.

Is the reality somewhere in-between?

“Already two narratives have developed about what happened, so reconciliation becomes more difficult,” said Salim Munayer. “The polarization has hit us very hard.”

Munayer is head of the Musalaha reconciliation ministry in Jerusalem. Like many, he has his personal views on recent events.

The US embassy move “adds pain to the insult.” Gaza is “hardly livable for human beings.” Hamas “motivated protests,” but Israel had a “lethal reaction.”

He also says it is incorrect to speak of a border. Israel has never defined its formal border with the Gaza Strip, over which it has effective control, save for the Egyptian outlet.

But as Messianic Jews and Palestinian Christians air their opinions on Facebook, he said, fewer and fewer leaders or laypeople are meeting face-to-face.

Some still try, while others come together to pray. But those engaged in actual dialogue on the issues are in decline.

“The majority stay in their ethno-religious categories,” Munayer said. But at the same time, he is newly “swamped” by Jewish groups (non-Messianic) asking for help to meet Palestinians.

“The political and religious sides are very discouraging. But the grassroots are proving a real change.”

Loden, from her Lausanne perspective, agrees with the negative assessment.

“The stresses of life for the faith communities of Israel-Palestine do not lend themselves to a focus on reconciliation,” she said. Security and justice alternate in primacy.

“There are only a few who pursue unity within the body of Messiah.”

“I cry for the Palestinian children in Gaza, who are victims of their radicalized leaders,” said Mokhtar Essid, a Tunisian convert to Christianity and now leader of Cornerstone, a Netherlands-based ministry focused on Arab believers in the Middle East and North Africa.

“At the same time, I am happy and grateful. That Israel exists is a wonder of God.”

Living in Holland, Essid is happy to speak publicly. Friedman says that not many Arab Christians are, fearing the anger of their communities.

“Whoever opposes the relocation of the US embassy to Jerusalem opposes the will of God,” said Y. H., pastor of a Lebanese congregation in northern Israel. Requesting anonymity, he said recent events are actually bringing his reconciliation community closer together.

“Those who deeply study the word of God and seek its profound truth are usually very few,” he said. “I rejoice to be one of them.”

Back in Gaza, Maher worries about the cyclical effect. The peaceful protester at the border had no idea the man standing nearby was from Hamas; he just knows his neighbor is now dead.

“The anger grows,” said Maher, “and the cycle begins again.”

Munayer warns similarly. Many of the wounded were shot in the knees.

“This will not be forgotten,” he said, “but will become another historical landmark of memory.”

With a different focus, Friedman also recognizes the impact.

“Most of us have lost hope in a two-state solution, due mostly to [Palestinian Authority] insincerity,” he said.

Yet all three within their contexts are seeking reconciliation in different ways, whether dialogue among leaders or among ordinary citizens. Perhaps the plea of Loden can apply to all.

Correction: This story has been updated to clarify that Friedman was referring to insincerity by the Palestinian Authority, not Palestinians in general.

In Shadow of Death, Palestinian Christians and ...