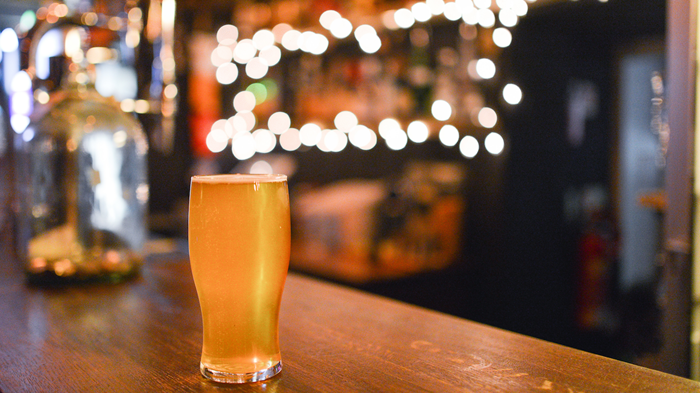 Views on Christians drinking alcohol have stayed steady among Protestant churchgoers over the past decade, according to a new study.

While 41 percent of Protestant churchgoers say they consume alcohol, 59 percent say they do not, according to a survey released today by Nashville-based LifeWay Research.

In a 2007 phone survey, LifeWay found 39 percent of Protestant churchgoers said they consume alcohol while 61 percent said they do not.

Gallup surveys over the last 75 years have typically shown that two-thirds of all American adults have occasion to drink alcoholic beverages, including 63 percent in 2018.

“While alcohol consumption continues be seen as mainstream in the United States, churchgoers’ attitudes about drinking haven’t changed much in the past decade,” said Scott McConnell, executive director of LifeWay Research.

But when it comes to total abstinence, fewer than a quarter (23%) of Protestant churchgoers believe Scripture indicates people should never drink alcohol. A majority (71%) disagree. 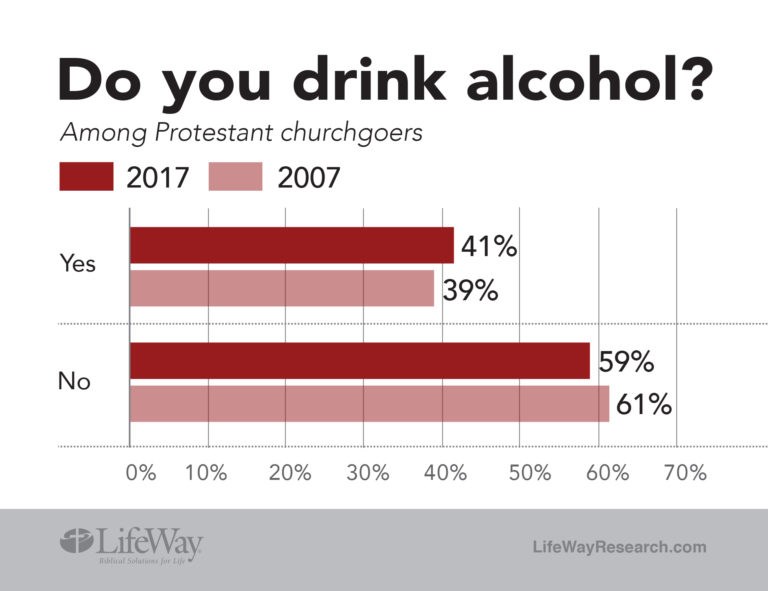 The share of churchgoers who say Scripture teaches against any kind of alcohol consumption has decreased six percentage points over the last decade. In 2007, 29 percent said Scripture directs people to never drink alcohol; 68 percent disagreed.

Researchers also found slightly more than half of churchgoers say Scripture indicates all beverages, including alcohol, can be consumed without sin (55%) and that Christians exercise biblical liberty when partaking of alcohol in reasonable amounts (54%). 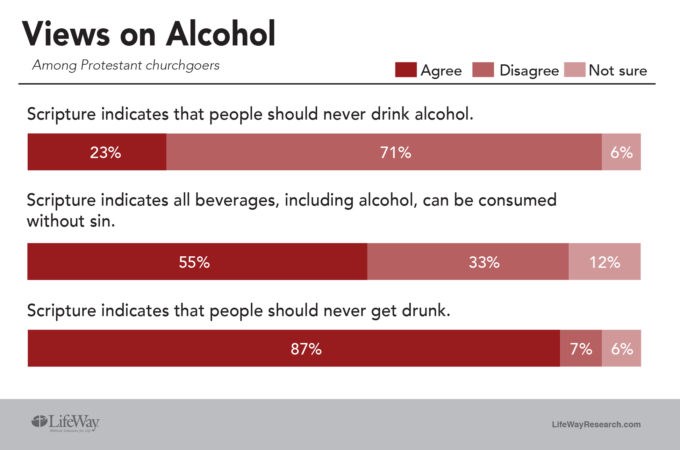 Attitudes and behaviors related to alcohol use vary based on age, geography, denominational affiliation, and other demographic factors.

Among Protestants who attend church weekly, only 25 percent agree the Bible bans alcohol. But 64 percent agree that Christians drinking alcohol can cause other believers to stumble. So only 37 percent say they drink alcohol.

Among churchgoers with evangelical beliefs, only 29 percent agree the Bible bans alcohol. But 74 percent agree that Christians drinking alcohol can cause other believers to stumble. So only 33 percent say they drink alcohol.

Which churchgoers say they drink alcohol:

Male churchgoers are more likely to say they drink alcohol compared to women (48% vs. 37%).

“Churchgoers’ perspectives on alcohol are not changing very fast,” said McConnell. “The majority believe that biblically they can drink, but they choose not to.”

LifeWay Research conducted the study of 1,010 American Protestant churchgoers Aug. 22-30, 2017. The survey was conducted using the web-enabled KnowledgePanel®, a probability-based panel designed to be representative of the U.S. population. For this survey, a nationally representative sample of U.S. Protestant and non-denominational adults (18 and older) which attends religious services once a month or more often was selected from the KnowledgePanel®. Initially, participants are chosen scientifically by a random selection of telephone numbers and residential addresses. Persons in selected households are then invited by telephone or by mail to participate in the web-enabled KnowledgePanel®. For those who agree to participate, but do not already have internet access, GfK provides at no cost a laptop and ISP connection.

Sample stratification and base weights were used for gender, age, race/ethnicity, region, metro/non-metro, home ownership, education, and income to reflect the most recent U.S. Census data. Study specific weights included for gender by age, race/ethnicity, region, and education to reflect GSS 2016 data. The sample provides 95 percent confidence that the sampling error does not exceed plus or minus 3.1 percentage points. Margins of error are higher in sub-groups.

Comparisons are made to a LifeWay Research phone survey conducted in April-May 2007 among 1,004 Protestant churchgoers.

For more information on this study, visit LifeWayResearch.com or view the complete report.