(UPDATED) Christians end Holy Week shaken by coordinated attacks at Sunday morning services and brunches on opposite coasts of the island nation.
Kate Shellnutt|April 21, 2019 08:56 AM 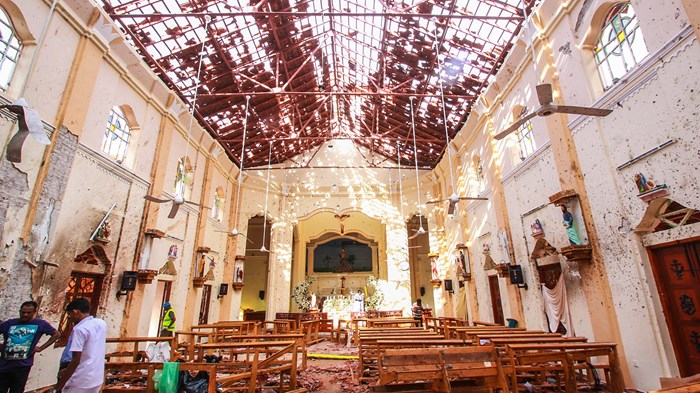 The joy of Easter quickly turned into terror and grief for Christians in Sri Lanka this morning, where suicide bombers conducted coordinated attacks on three churches and three high-end hotels, killing more than 290 people and injuring almost 500.

Officials urged citizens to resist speculating whether Muslim extremists were to blame for the violence, which mostly took place in or around the capital city of Colombo. But police had been warned 10 days prior that churches may be targeted by a radical Islamist group, National Thowheeth Jama’ath, according to a security memo obtained by multiple media outlets and posted on Twitter by a government official.

Experts say if the bombings end up being religiously motivated, they represent the bloodiest sectarian attacks in decades in the island nation, located southeast of India, where civil war ended in 2009.

At Zion Church, rows of Easter lilies remained in front of the sanctuary as victims fled the blast, leaving behind hymnals, Bibles, and debris across the floor. More than 28 worshipers, including a dozen children, were killed and another 27 injured at Zion—according to its website, a charismatic church belonging to the Fellowship of Free Churches of Sri Lanka and located on the opposite side of the island in Batticaloa. A report in the Times of India described a pastor greeting the suicide bomber, an Easter visitor, just minutes before the blast.

“May the Dear Lord continue to comfort us all in this difficult time,” read a post on the church’s Facebook page, with a video message from its senior pastor, Roshan Mahesan.

UPDATE: Sri Lankan Sunday School Was “Willing to Die for Christ” on Easter. Half Did.

Other attacks took place at two Catholic churches, St. Anthony’s Shrine in Kochchikade and St. Sebastian’s Church in Katana, and three hotels in Colombo, all around 8:45 a.m. local time.

St. Sebastian, where initial reports indicated that more than 100 worshipers had been killed, posted a brief plea on Facebook inviting the community to “come and help” after the bombing, along with photos of rows of disheveled pews covered in roof tiles, the church’s ceiling blown out, and blood splattered on the walls.

“This is an attack against the whole of Sri Lanka because [we are a] multi-ethnic, multi-religious and multi-cultural country, and the whole country comes together in celebration of Easter Sunday," Edmond Tillekeratne, social communications director for the Archdiocese of Colombo, told CNN from St. Sebastian’s.

“We are dismayed by this turn of events,” Prabodith Mihindukulasuriya, a faculty member at Colombo Theological Seminary, told CT. “After 10 years of carefree existence, we are once again lunged into a period of having to live in fear of suicide bombers.

“We cling to the Risen Lord and the hope of the resurrection,” he said. “Without him, we are in darkness and death.”

“Be patient in trouble, and keep on praying,” stated the National Christian Evangelical Alliance of Sri Lanka (NCEASL), citing Romans 12:12 as it deplored the bombings and urged Christians to “remain calm and refrain from being misled by rumours during this time of crisis” [full statement below].

“In three decades of war, this scale of attack has never happened,” said Meenakshi Ganguly, the South Asia director at Human Rights Watch, in The New York Times. “In terms of serious, religion-based violence, we haven’t really seen that.”

“The attackers knew their targets well, and seem to have chosen them for maximum symbolic value,” wrote Randy Boyagoda, a Sri Lankan Catholic novelist and professor at the University of Toronto, for The New York Times. He wondered “whether the global currents of religiously inspired terrorism [will] overwhelm the island’s longstanding experience with pluralism.”

CT Podcast: The Easter Attacks Are a Turning Point for Sri Lanka’s Christians

The government has arrested 24 people in connection with the attacks, but has not released further details about their affiliation. The Catholic archdiocese in Colombo canceled evening services, and the Sri Lankan army has increased security at churches and other sites that may be at risk.

Christians make up less than 10 percent of the population of the majority-Buddhist nation, and have reported escalating concerns about their religious freedom. [The Conversation offers an explainer on the island’s Catholic and Protestant history.]

Open Doors ranks Sri Lanka as No. 46 on its World Watch List of the 50 countries where it’s hardest to be a Christian. It explains:

Sri Lanka is a majority Buddhist nation, and so while Christians from more historical churches enjoy a little more freedom in expressing their faith, believers from Buddhist backgrounds are treated as second-class citizens and can face slander and attacks.

Believers from Buddhist or Hindu backgrounds face harassment and discrimination from their families and communities. They are pressured to recant their new faith, as conversion is regarded as a betrayal of their ethnicity. The majority of state schools do not teach Christianity as a subject, so Christian schoolchildren are forced to study Buddhism or Hinduism. Churches in rural areas have been attacked or closed, and Christians have been assaulted.

Last October, Sri Lankan evangelicals complained of rising religious freedom violations, with the NCEASL reporting 67 incidents from January to September 2018. Last August, the Sri Lankan Supreme Court confirmed that the right “to propagate” one’s religion is not protected by the Constitution, which gives Buddhism the “foremost place” among all other religions and places it under state protection, reported World Watch Monitor.

“These coordinated attacks against churches in Sri Lanka were planned on Easter to strike fear in the hearts of Christians. But this sort of tactic will not prevail this Easter,” said David Curry, CEO of Open Doors USA. “I call on all Christians to unite in their suffering and in their testimony of how Jesus triumphs over death. We stand against this attack fiercely believing that all people should have the right to worship freely.”

Holy Week has been a dangerous time where Christian minorities face terrorist violence, and churches typically prepare with heightened security. Last year, Palm Sunday was the occasion for deadly attacks on Coptic Christians in Egypt.

“Sadly enough, there’s now an ugly and utterly predictable dynamic on Easter Sunday,” wrote veteran Catholic journalist John L. Allen Jr. for Crux. “Somewhere in the world, full churches will be attacked and some number of Christians will die for no other reason than that they chose to attend services to celebrate what is supposed to be the faith’s great celebration of life.”

Johnnie Moore, an evangelical leader and commissioner with the US Commission on International Religious Freedom, tweeted: “Christians now awaken each Easter & ask, ‘WHERE will [we] be killed this year?’ Not, ‘IF.’”

He offered Isaiah 54:14 as a prayer: “You will be secure under a government that is just & fair. Your enemies will stay far away. You will live in peace, & terror will not come near.”

Elsewhere in Southeast Asia, terrorists attacked a Philippine church in January, killing 20, and three churches in Indonesia last May, killing at least a dozen.

The [NCEASL] is deeply distressed and deplores the Easter Sunday (21 April) explosions targeting the St. Anthony’s Church in Kochchikade, St. Sebastian’s Church in Katana, Zion Church in Batticaloa, and three leading hotels in Colombo. The incidents in Colombo and Batticaloa, according to media reports, have left over 180 dead and several others injured. Moreover, explosions elsewhere in Dehiwela and Dematagoda left five dead, including three police officers.

The NCEASL calls on the general public and especially the Christian community in the country to remain calm and refrain from being misled by rumours during this time of crisis.

The NCEASL also calls on the government and security forces to take all steps necessary to arrest the situation swiftly and bring the perpetrators of these attacks to justice.

Finally, while offering our prayers and support to all those affected, the NCEASL calls on the national and global Church to pray for those grieving the loss of loved ones and those injured in these unfortunate series of attacks.

This article will be updated. Additional reporting by Jeremy Weber.