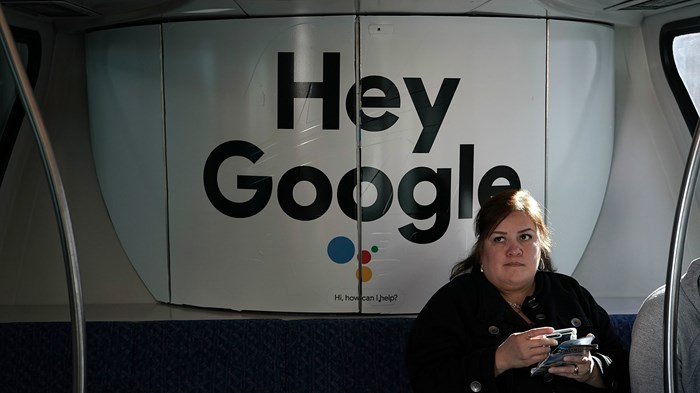 For the first time in at least a decade, Americans now view churches and other religious organizations more favorably than the technology companies whose services and devices denominate daily life.

Since 2010, most US adults have appreciated the contributions of tech firms, believing they had a positive effect on “the way things are going in the country,” according to a new report from the Pew Research Center.

But in the shadow of cultural and legal battles over privacy, the pitfalls of social media, and the increasing dominance of Silicon Valley behemoths, faith in tech has taken a nosedive.

For the past decade, around 7 in 10 Americans said tech companies had a positive effect on the country, peaking in 2015 at 71 percent. Today, just half of Americans agree.

No other major institutions examined by Pew—colleges and universities, labor unions, banks and other financial institutions, large corporations, national news media, and churches and religious organizations—saw as severe a decline in support as tech brands. 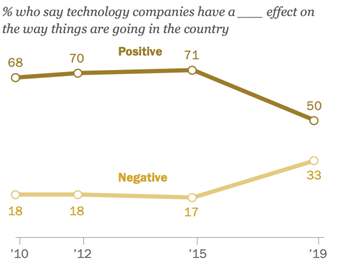 “For many years, there was an inherent trust in technology companies because of the value their tools and services added to our lives,” Jason Thacker, creative director and associate research fellow at the Southern Baptist Ethics and Religious Liberty Commission (ERLC), told CT. “But as the data shows, that trust has been broken as the real impact of these tools are being widely felt.”

Just a few years ago, there was “broad agreement that technology companies and small businesses have a positive effect on the way things are going in the country,” Pew researchers stated in 2015. That consensus, as far as the tech companies go, has taken a serious hit, as just last week Facebook was fined a record-setting $5 billion for privacy violations. Other household names like Apple and Google have felt the legislative sting of consumers and governments angry about the way their data has been handled.

The recent dip in approval for tech companies could reflect a helpful shift in consumer engagement.

“It is a positive development that the public now is starting to think critically about how we use technology and its influence on our lives,” said Thacker, who researchers the ethical and social implications of tech. “As those who believe that all human beings are created in the image of God, Christians bring a unique perspective to these questions that I hope continues. We must not outsource our moral leadership to culture.” 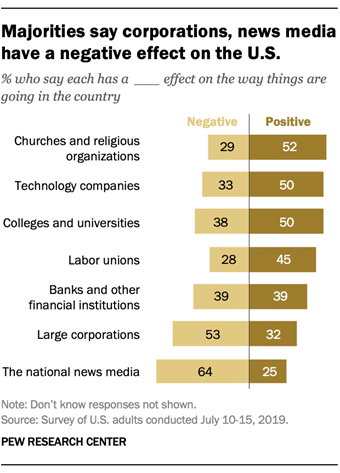 Increasingly, Christians are stepping up to the challenge. Numerous evangelical leaders, including Thacker, endorsed a specifically evangelical statement of principles related to artificial intelligence earlier this year.

Josh Moody, senior pastor of College Church and founder of God Centered Life, encourages Christians to embrace technology as a means of evangelism. “We must not be luddites when it comes to technology,” he said, with an accompanying caution, “but we must also be aware of what it is doing to us.”

But faithful discussions about current technological issues and upcoming developments ought not be relegated just to theologians and church leaders, said Thacker.

“One of the most practical ways the church can help lead in this area is to begin addressing these questions in our gatherings, classes, and small groups,” he said.

“By simply talking about them in community, we can help our people navigate these issues with wisdom and hope.”