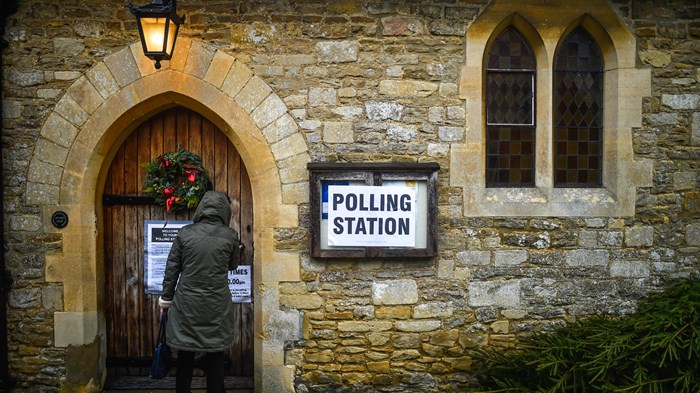 British evangelicals are divided over Brexit. The January 31 deadline for the nation’s departure from the European Union is fast approaching, and Thursday’s elections gave the Conservative Party a historic victory and “a powerful new mandate to get Brexit done,” according to Prime Minister Boris Johnson. As evangelicals absorb the news, they are grappling with the political tumult, the ongoing uncertainty, and the question of what a Christian should do in these difficult times.

The Evangelical Alliance of the United Kingdom (EAUK) has been urging everyone to pray, posting a prayer to social media every Thursday “to ask God for His peace, grace and guidance.” It’s an effort at unity amid division. The EAUK has remained “studiously impartial” on Brexit, “to reflect the diversity of political opinions” among evangelicals, according to spokesman Danny Webster.

If there’s a chance to come together, Webster believes, it’s in prayer. “We can pray for wisdom for our leaders,” Webster told CT, “whether we agree with them or not.”

Britain itself has been deeply divided over the plans to leave the European Union. In 2016, 52 percent of the population voted for leave. Debates about how to do that, exactly, have roiled UK politics ever since, as two successive prime ministers struggled to negotiate a divorce with the EU that can also get approved by Parliament.

A slight majority of evangelicals voted remain. According to a 2016 study immediately before the vote, 51 percent supported staying in the EU, 27 percent wanted Brexit, and 22 percent were undecided. In the last three years, British evangelicals across the spectrum have expressed the need “for peace and reconciliation.”

The generally pro-remain stance of British evangelicals might be surprising to some. However, political scientist Andrea Hatcher of the University of the South in Sewanee, Tennessee, found British evangelicals are “less boundaried” and generally “more internationalist in outlook” than either their Anglican and Pentecostal peers or US evangelicals. They are also more willing to work across political divides.

Krish Kandiah, evangelical author and founder of Home for Good, a UK-based fostering and adoption charity, agrees. “It is vital for Christians in the UK as members of the global body of Christ to demonstrate a spirit of global allegiance and brotherhood,” he said. “Now more than ever we are needed to stand up for hospitality and offer welcome to our vulnerable brothers and sisters around the world.”

Being Christian means being welcoming

Katie Gaddini, a sociologist at the University of Cambridge, says immigration is a key issue for a lot of British evangelicals, as part of a larger commitment to hospitality. For them, “being a Christian means being welcoming and hospitable to outsiders,” she said.

British evangelicals worry that Brexit might cut them off from the rest of the world, Gaddini said, as well as the global evangelical community. The feeling can be devastating.

Gaddini spoke with an evangelical in London who was so upset after the Brexit vote that the woman stayed in bed for a week and cried. She canceled social events so she wouldn’t have to face the reality that so many of her neighbors, friends, and fellow evangelicals voted leave.

At the same time, British evangelicals don’t want to be separated from their local evangelical community either. As Brexit deadlines loom yet again, Gaddini said, “there will be more discussion, church events, groups and wider conversation around how evangelicals can practice their faith in the midst of this political upheaval.”

There are also evangelicals who are staunchly pro-leave and feel God is at work in Brexit. Paul Garner of the Biblical Creation Trust advocated for the leave position in an op-ed in the Evangelical Times, a nondenominational newspaper.

“The EU has been bad for Britain,” he wrote. “Sound political arguments apply to Christians and non-Christians alike and, in my mind, there are many compelling reasons to leave the EU.”

Three years later, his views are steadfast. “Events since the referendum haven’t changed my mind,” he said. “The basic arguments remain sound.”

Others support Brexit because of prayer and prophecy. Peter Horobrin, founder and international director of Ellel Ministries, said the Brexit vote was a “massive answer to prayer” because God “acted to set the UK free from the external spiritual control of the European Union.”

Tony Pierce, an end times teacher, has warned evangelicals that the EU will be associated with the Antichrist. He points to the sculpture that stands outside the Winston Churchill EU building in Strasbourg, France, “The Removal of Europa,” depicting the ancient Greek myth of the abduction of Europa by Zeus, who is represented as a large silver bull. For Pierce, this an image “straight out of the Book of Revelation,” a woman riding a beast.

More British evangelicals, however, are worried about the impact Brexit might have on missions. “The impact of Brexit remains unclear,” said John Stevens, national director of the Fellowship of Independent Evangelical Churches (FIEC). “But the removal of the mutual rights of free movement are likely to make it harder for UK citizens to serve as missionaries in some European countries.”

Highlighting Eastern European, Middle Eastern, Central Asian, and sub-Saharan African churches in the FIEC, Stevens said, “they will clearly be affected by the need for people to obtain ‘settled status’ and where it will be harder for others to come, live, and work in the UK in the future.”

Amos Enabulele, national president of the Africa Christian Fellowship (ACF) in the UK and Ireland, said that his members are apprehensive “about the possible negative consequences of Brexit.”

The ACF is also turning to prayer with a planned 2020 event, “Prayer for Nations.” Enabulele said, “we believe that the implications of Brexit will reverberate around the world and trigger un-envisaged and unintended consequential patterns in Britain and in nations far and near.”

Ruth Chepkwony, an African evangelical and immigrant living near Southwark, shares these fears. A recent All Party Parliamentary Group report found that African applicants are already more likely to be denied a UK visa. She said she is concerned that Brexit will further complicate immigration.

“There is so much paperwork, the requirements are unclear,” she said, “plus many of us get rejected anyways. After Brexit, it will be much harder.”

Faced with so many unknowns, British evangelicals are trying to remain focused on things that don’t change.

“It is essentially important our attitude to each other remains fueled by love,” Webster said. “As Brexit stumbles towards actually happening, evangelicals should not lose sight of loving our neighbor.”

That is because, John Stevens said, “there is no specific ‘biblical’ position on Brexit.” Stevens believes evangelicals have "to speak wisely and model unity-in-disagreement.”

“This will no doubt become easier once decisions are made and the uncertainty is ended,” he said. “In the meantime we need to keep praying for wisdom and grace, and keep trusting the good sovereign purposes of God. Who will win? At this point God knows. And that is the only true comfort.”