Advent will be “mellow” on South Pacific island as government restricts public gatherings amid vaccination campaign. 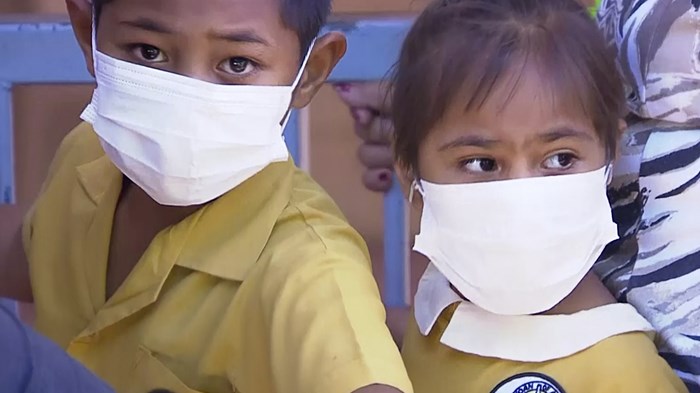 Image: Associated Press
Masked children wait to get vaccinated at a health clinic in Apia, Samoa.

Children in Samoa have been temporarily banned from attending church services and other public gatherings, due to a growing measles outbreak that has claimed more than 60 lives and threatens to cancel Advent celebrations.

The government of the South Pacific island nation was closed today and yesterday, as officials and public health workers turned all their attention to an immunization campaign.

Prior to the outbreak, less than a third (31%) of the island’s population of about 200,000 were protected by a measles vaccine, according to Reuters. After cases were reported and a national emergency was declared in mid-November, nearly another third received immunizations in the following two weeks.

As of yesterday (Dec. 5), 82 percent of infants and children up to 4 years old have been vaccinated, along with 93 percent of those between 5 and 19 years old.

Even so, more than 4,300 Samoans have been diagnosed with measles and at least 63 have died. Of those, all but 3 were children; 55 were 4 years old or younger. About 20 more children are in critical condition.

In a nation where many are not vaccinated, the prime minister made it clear that Christian leaders are needed to encourage their countrymen to get vaccinated.

“The government needs the support of all the village councils, faith-based organizations, and church leaders, village mayors, and government women representatives,” said Tuilaepa Sailele Malielegaoi in a state address last Sunday. “Let us work together to encourage and convince those that do not believe that vaccinations are the only answer to the epidemic. Let us not be distracted by the promise of alternative cures.”

Indeed, many Samoans had never received childhood immunizations, either out of lack of awareness about the potential severity of measles or from seeking the help of traditional healers.

“Some of our people pay a visit to traditional healers thinking that measles is a typical tropical disease, which it is not,” the prime minister told the Associated Press.

Radio New Zealand (RNZ) reported that Malielegaoi has threatened to jail anyone who discourages vaccination and offers promises to provide alternative methods of healing. On Thursday, Samoa’s attorney general confirmed that an alleged anti-vaxxer had been charged with “incitement against the government vaccination order.”

According to Reuters, low vaccination rates in Samoa have also been attributed to rising fears after a pair of infants died following vaccinations last year, though the deaths were later determined to be caused by incorrectly mixed medicines and the responsible nurses were found guilty of manslaughter.

During the nationwide vaccination campaign, roads have been shut down to nonessential vehicles, and families in need of vaccinations were directed to hang red flags outside their homes.

“The government issued [an order] that all the young children must be stopped from attending any gatherings,” Losi Antonio, a priest with Mulivai Catholic Church, told RNZ. “So I asked our parish here to please make the children stay home, especially from babies up to 17, 19 years old.”

He said normally during this season the churches would be filled with the sounds of children singing. But not now.

“Even if they go, there’s not much celebration that was planned, but those who are in New Zealand it will be the same feeling. It’s going to be a very mellow Christmas for Samoans,” Teleiai Edwin Puni, chair of the Pacific Leadership Forum in Auckland, told RNZ.

“Christmas this year will be a sad one for these families,” Puni said in a Facebook post yesterday, calling for assistance for families who have lost children. “We want to reach out to them with your help.”

The sadness, and the urgency, is felt across the island where life in many places has come nearly to a standstill.

“All our schools are closed, national exams have been postponed,” Vavatau Taufao, general secretary of the Congregation Christian Church in Samoa, told Reuters. “We are still having church services but if it gets worse we will have to stop church altogether—and it’s almost Christmas.”

Samoa’s Mormon community has already suspended all church gatherings until the national state of emergency is lifted.

Island officials have pushed to distribute vaccines, carrying out a door-to-door mass vaccination campaign, but infection rates were thought to be rising. While some remain defiant of the government’s campaign, and its orders to keep children away from public gatherings, the island is largely frozen in fear over the epidemic—and, for some, over the forced vaccination campaign.

In some ways, the anti-vaccination mentality in Samoa is a manifestation of the larger international anti-vaxx movement. CT reported earlier this year on why some American Christians refuse vaccinations for themselves and their children because of moral objections.

Measles outbreaks are on the rise, even in the developed world, in recent years. And they often strike in tight-knit ethnic and religious subcultures, as it did among New York’s ultra-Orthodox Jewish community last winter, and Washington state’s Ukranian and Russian immigrants this past spring. Evangelical churches and Christians schools, where resistance to vaccinations is sometimes present, have also been connected to some measles flare-ups.

In 2019 in the United States, there were over 1,200 measles cases from January through early November, the most since 1992 and more than double the amount reported in any of the last 10 years, according to the Center for Disease Control and Prevention. Measles can spread easily in communities where people are unvaccinated.

On Sunday, Samoan Christians across denominations united to pray for God’s mercy and healing. Leaupepe Kasiano Leaupepe, chairman of the National Council of Churches, said the joint effort was in tandem with the government’s initiative.

“May the first day of the last month of this year bring us together, united through prayer, as we ask for God’s healing powers over our nation suffering from this disease,” said Leaupepe, according to the Samoa Observer. “We acknowledge the hard work by doctors and nurses within all hospitals. We commend your efforts through treatments and may God use your line of work as a way to showcase his love for his people.”

Gratitude toward the nation’s health workers, and the generosity of other countries, has been a common theme among political and religious leaders in the past week.

“The answer to our prayers is with us,” the prime minister told the nation in his address, “through the services of the doctors and the nurses and all health personnel.”

Subscribe to CT and get one year free
Tags:
InternationalMedicine and HealthPolynesia
Posted by:
Griffin Paul Jackson