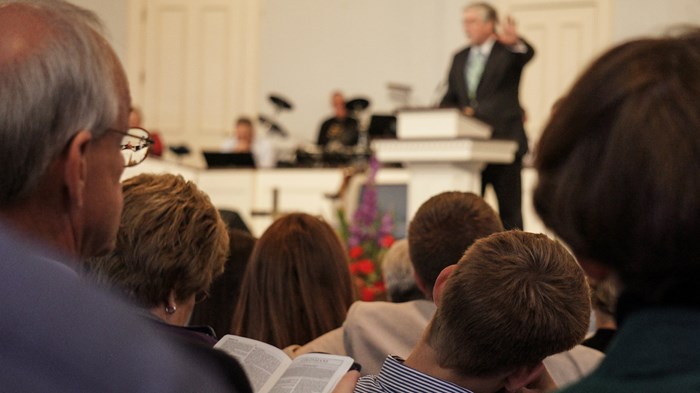 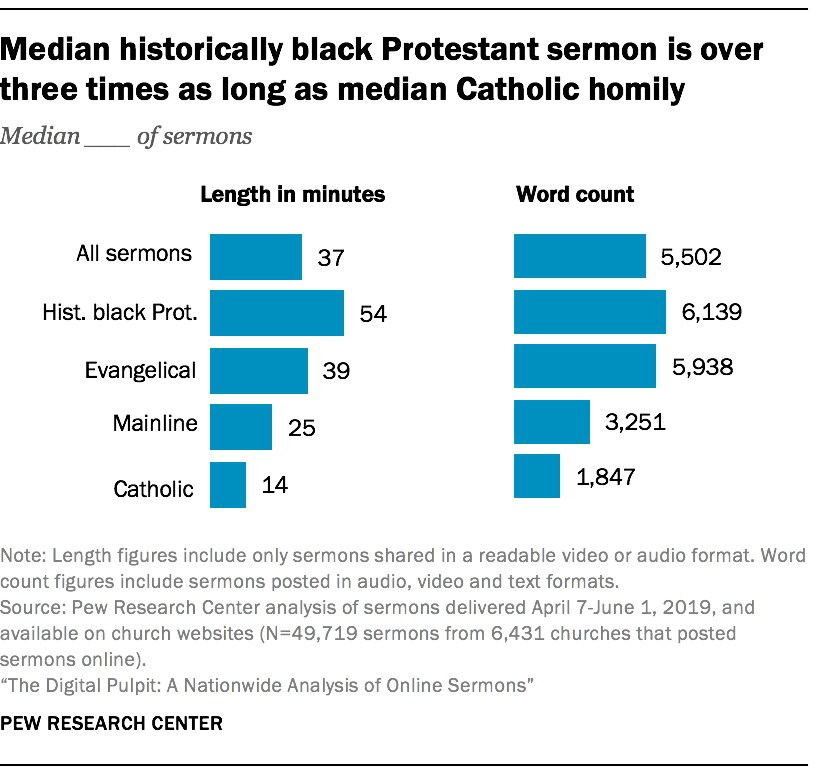 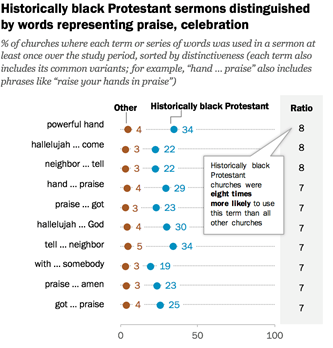 Pew said sermons at the black churches lasted longer than mainline Protestant sermons even though, on average, they had roughly the same number of words. A possible explanation, Pew said, is that the preachers at black churches allow more time during their sermons for musical interludes, responses from worshippers in the pews and dramatic pauses in their oratory.

Numerous prominent pastors have pondered the question of a sermon’s length.

“I’ve asked and been asked that question a hundred times,” Hershael York, a professor of Christian preaching at the Southern Baptist Theological Seminary, wrote in 2016. “Today, after 35 years in ministry, I have a definitive answer: You can preach as long as you hold their attention.”

The question came up in a 2018 episode of “Ask Pastor John,” a Q-and-A forum hosted by the John Piper, chancellor of Bethlehem College & Seminary in Minneapolis. He said he generally needs at least 40 minutes, sometimes more than 50, to deeply explore his themes.

“If I look around the nation, there are many hundreds, maybe thousands, of growing churches where pastors preach rich, Christ-exalting, God-centered, Bible-saturated, textually rooted, intellectually challenging, emotionally moving, life-altering sermons for 50 or more minutes, and very few people get frustrated that they are too long,” Piper said.

Missouri-based researcher/writer Chris Colvin, who helps pastors with sermon preparation, notes that Jesus’ Sermon on the Mount—containing some of the most powerful passages in the Scriptures—can be read aloud in less than 15 minutes. 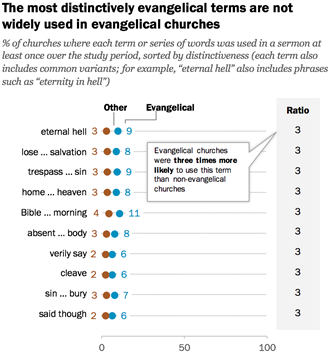 In addition to sermon length, the new Pew analysis delved into an examination of words and phrases most commonly used by preachers from the different Christian traditions.

It found that the word “hallelujah” appeared in sermons from about 22 percent of the historically black Protestant churches, and those congregations were eight times more likely than others to hear that word.

Sermons from evangelical churches were three times more likely than those from other traditions to include the phrase “eternal hell.”

The sermons that American churches share online are heavily laced with Scripture: 95 percent reference at least one book, Gospel, or epistle of the Bible by name, and more than half (56%) cite particular books from both the Old Testament (also known as the Hebrew scriptures) and the New Testament (which includes the Christian Gospels) in the same sermon.

These numbers vary across Christian groups, with evangelical churches being the most likely to reference a book, Gospel or epistle of the Bible by name—doing so in 97 percent of all sermons. Pastors across the country are more likely to reference the New Testament by name (90% do so) than to mention the Old Testament (61%).