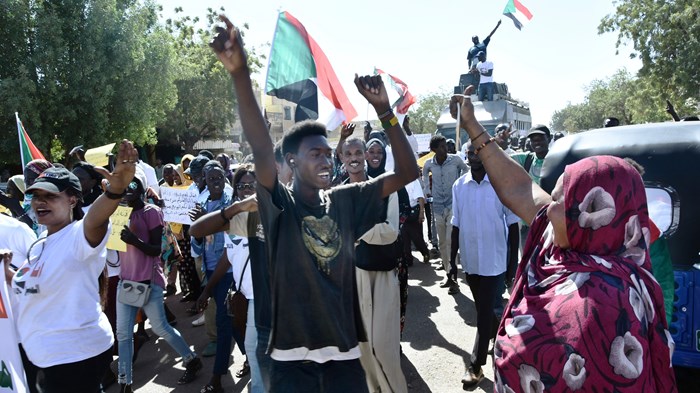 Image: Mohamed Okasha / Associated Press
Sudanese Christians march through the streets to celebrate the birth of Jesus on Dec. 23, 2019, in Khartoum Bahri, Sudan.

“Glory to God in the highest. And on Earth, peace, goodwill toward men,” a speaker said. Hymns blared and chants of hallelujah intermingled with loud, emotion-filled cries of celebration. Passersby and merchants snapped photos or flashed victory signs.

The marching group from the Bahri Evangelical Church was small, but the symbolism of the moment loomed much larger. The March for Jesus holiday tradition had been suspended in recent years under authoritarian President Omar al-Bashir, whose government was accused of harassing and marginalizing Christians and other religious minorities.

This holiday season, a year after the eruption of the uprising against al-Bashir, Sudan is transitioning away from his three-decade repressive rule. The military overthrew him in April after months of pro-democracy protests. A transitional military-civilian administration now rules the country.

Though some caution against being overly optimistic about expanded religious freedom, Monday’s march was one small sign of new openings.

“Hallelujah! Today, we are happy that the Sudanese government has opened up the streets for us so we can express our faith,” said Izdhar Ibrahim, one of the marchers. Some Christians had been frightened before “because we used to encounter difficulties.”

The changes started in 2011, after South Sudan gained independence from Sudan following a long war and a referendum. South Sudan is mostly Christian and animist, a belief that all objects have a spirit. Al-Bashir’s government then escalated its pressure on the remaining Christians, human-rights campaigners and Christians say.

Al-Bashir, who came to power in an Islamist-backed military coup in 1989, failed to keep the peace in the religiously and ethnically diverse country.

Noah Manzul, one of the church elders, said the march was treated almost as if it were a “crime.”

Its return is “an expression of religious freedom,” Manzul said. “We can live our lives with ease.”

Manzul’s social work with homeless children and orphans got him into trouble under al-Bashir, when he was accused of trying to convert the children to Christianity, an allegation he denies. Activities like singing hymns in the teeming market outside the church were stopped, he said.

To be sure, some Christians said they were not impacted negatively by al-Bashir’s government, and officials at the time disputed that the government targeted Christians.

But Suliman Baldo, senior adviser at the Enough Project, which supports peace and an end to atrocities in Africa’s conflict zones, said the ultimate goal under al-Bashir was “to limit the influence of the church.” Under his rule, Christian church properties could be seized, Baldo said, adding some churches were demolished, and some preachers were arrested.

During past holiday seasons, many recalled, posters would appear on the streets warning against celebrating with the kofar, or infidels, a reference to Christians.

Now, the constitutional declaration that guides this transitional period no longer refers to Islam as the primary source of legislation in Sudan. A Christian woman was appointed to the nation’s interim ruling Sovereign Council.

And December 25 was declared a public holiday.

Pastor Hafiz Dasta, of the Bahri church, said a Muslim cousin can now ring in the season with him.

“I always celebrated with him at Eid al-Adha,” Dasta said, referring to the Islamic feast. “He couldn’t celebrate with me on Christmas because he would be working. This time around ... we will celebrate together and eat together," he said before Christmas.

The church is still embroiled in legal cases stemming from land and other disputes, Dasta said. But at least on the day of the march, it was all about celebrating Jesus. “How great is freedom!” he exclaimed during the gathering.

Ezekiel Kondo, archbishop of the Episcopal Church of Sudan, said he was encouraged by government efforts but he wants to see more changes such as the legalization of some churches. Many Christians acknowledge that some churches were built without permits, but they say obtaining the required paperwork under al-Bashir’s government proved virtually impossible.

“They would say come back tomorrow, and tomorrow never comes,” Kondo said.

Kondo, like some, says it is too early to know if there’s “complete freedom, especially religious freedom.”

As recently as June, nearly two months after al-Bashir’s removal, a violent security crackdown left scores of pro-democracy protesters dead. As Sudan marked the first anniversary of the anti-al-Bashir protests, Amnesty International urged transitional authorities to protect rights and deliver on change demands, including accountability for the killings. Some pro-democracy activists also pointed to what they say are discriminatory laws that remain on the books even as they commend the repeal of a notorious moral policing law. Women had been subject to citation for “inappropriate dress.”

And while changes are underway to remove interference in church administration, the government will monitor instead religious ideas that try to reverse recent gains.

“The Sudanese Islamic Movement project has been defeated in political and community life thanks to the glorious revolution,” said Nasreddine Mufreh, the religious affairs minister, to Asharq Al-Awsat. But he acknowledged the effort of Islamists to regain a foothold through their sermons.

“We will besiege these mosques with a serious discourse calling for moderation and the fight against extremism.”

At least one influential group of outside observers says the changes are encouraging, despite the challenges.

Anurima Bhargava, a member of the United States Commission on International Religious Freedom (USCIRF), said in a phone interview that a commission meeting earlier in December with the Sudanese Prime Minister, Abdalla Hamdok, and other officials was “one of the most promising meetings that we’ve had.”

She said commissioners raised concerns that included the demolition of some churches and the damage to church properties under al-Bashir.

Appointed in August, Hamdok and other Sudanese government officials outlined efforts to ensure protection of religious freedoms and human rights, including trying to make changes to apostasy and blasphemy laws, Bhargava said.

“They’re working on a bunch of different fronts. I think it’s going to take some time for all of that to be felt,” she said.

And it pledged to ensure accountability for victims of human rights abuses under the previous regime “to the utmost satisfaction of the victims,” while working toward overall reconciliation.

“If Sudan continues on the path they’ve started, they have the potential of becoming the nation most astonishingly transformed in the shortest period of time,” said Moore.

“Two years ago, no one could have imagined we would be having this discussion.”

The efforts have been noted. In a December 20 statement from US Secretary of State Mike Pompeo, the State Department announced that Sudan had been dropped from a list of countries that have engaged in or tolerated “systematic, ongoing and egregious violations of religious freedom” and upgraded to a special watch list. It attributed the change to “significant steps” taken by the transitional government.

Sudan hopes the United States will soon remove it from the list of state sponsors of terrorism, to which it was added in 1993. The move would unlock international aid and debt relief.

Tibor Nagy, US assistant secretary for African affairs, said there is no longer an “adversarial relationship,” but that there are conditions.

“It’s not an event, it’s not flipping a light switch,” he told Reuters. “Everybody is hoping that it happens as quickly as possible, [and] we all understand the hardships that it is causing.”

Back in Bahri, the marchers sang the Sudanese national anthem, waved Sudanese flags and swayed to hymns. One passerby rhythmically clapped to the blaring music. A driver honked his horn to the beat. Others pumped their fists in the air in support or gave the revelers thumbs-up.

Men and women pressed small books, like the Gospels of Luke and John, into the palms of onlookers. Some paged through them. Others tucked them in their pockets or turned them down.

Nahla Motassim, a Muslim, didn’t want a book but said she supports the march.

“The former regime restricted freedom of religions ... when they themselves didn’t apply Islam. The regime was unjust,” she said. “I believe in something and someone else believes in another thing ... That’s between him and God, but I live with him, eat with him, and drink with him.”

The march “symbolizes freedom of expression and of opinion in our diverse country after 30 years of oppression to all kinds of Sudanese,” marcher Finlay Philemon said. “I’m so happy.”

As he spoke, a woman peered from behind the door to her house. Later, she came out.

“Merry Christmas,” the woman, Magdolin Mohamed, told him. “May you always live in peace and safety.”

“Same to you,” he responded with a wide smile.

Mohamed, a Muslim, said she wanted to salute the celebrants “because we are all one people.”

Tears rolled down her face.

“Before, they didn’t give them the opportunity to go out and celebrate like that,” she said in between sobs. “I am so happy for them. I am happy that freedom is back, that life is back in Sudan.”