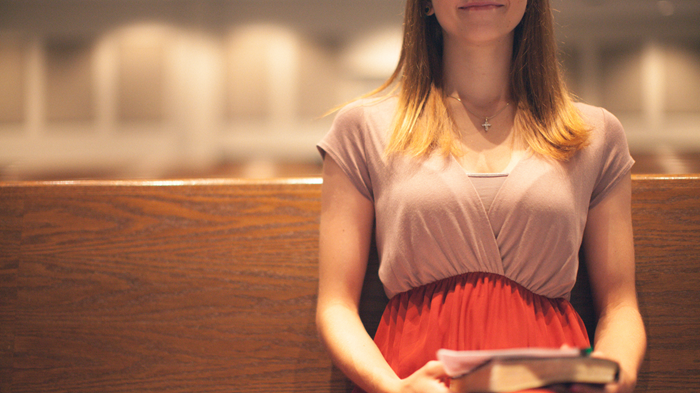 Moving for college remains the top reason young people stop attending church in both surveys, which are based on responses from more than 2,000 young Americans who attended a Protestant church regularly (twice a month or more) for at least a year during high school. 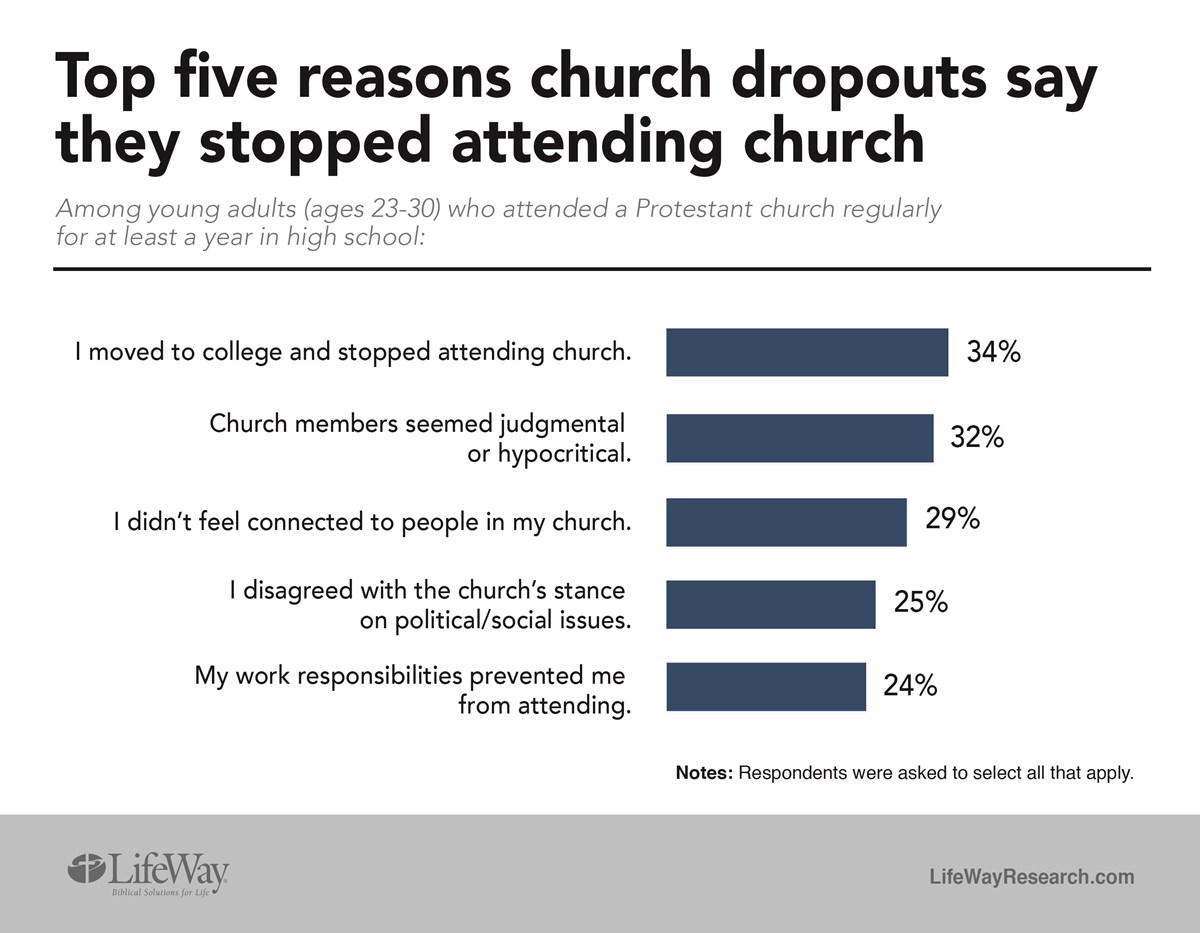 Other popular reasons to include: a perception that church members were hypocritical (32%), disconnect with church life (29%), and lack of student ministry opportunities (24%).

Political rifts between young Christians and their congregations are growing. A quarter (25%) of recent dropouts said disagreements over their church’s stance on political and social issues contributed to their decision to stop attending, compared to 15 percent in 2007.

The follow-up survey came in the wake of the 2016 elections, with partisan divides over President Donald Trump’s victory adding to Generation Z’s growing concerns around race, social justice, and LGBT rights.

“In the past, it was possible for difficult issues like this to be brushed aside or go unaddressed entirely,” Ben Trueblood, director of student ministry for LifeWay Christian Resources, told CT last year, responding to trends among Gen Z. “But that approach cripples the purpose of student ministry. Now, student ministry leaders are forced to teach what the Bible says on these issues, as well as equip teenagers to respond biblically.”

In a time when many churches are “predictable clusters of the politically like-minded,” as James K. A. Smith has said, it’s harder for those who feel like ideological outliers to stick around. As CT reported last year, church attendance dipped among born-again and evangelical Christians across age groups after Trump’s election, particularly among Hillary Clinton supporters, who may have not felt welcome in certain church contexts.

Young people—some temporarily and some permanently—are moving outside churches to find a cohort that shares their political and spiritual beliefs. After high school, many find that community on campus.

A quarter of 18- to 22-year-olds in 2007 and a third in 2017 said they stopped attending church regularly simply because they “moved to college.” (Among young adults who had enrolled in college, that number is up to nearly half—47 percent.)

Still, only 14 percent said their school obligations actually kept them away from church, compared to 24 percent that said their work responsibilities prevented them from going.

Other studies have noted a clear correlation between college attendance and decreased religiosity but find the decline in faith isn’t the fault of professors or classes themselves. Rather, it may be due to the “college experience” more broadly or the transition from one’s family home to a new independence. There is also plain teenage amnesia.

“It's not that most rejected the church,” wrote Ed Stetzer, former executive director of LifeWay Research and the current head of the Billy Graham Center at Wheaton College. “For the most part, they simply lose track of the church and stop seeing it as important to their life.”

Of those who dropped out of church for at least a year during the college years (between ages 18 and 22), more of them—31 percent—now attend regularly than those who never returned—29 percent.

LifeWay reports that church attendance peaks at age 15, with more than three-quarters regularly attending then. But that percentage took a nosedive at 18, and by 19, only 4 in 10 former regular-attenders were still in the habit. By 21, one-third attended church services regularly—a percentage that remained constant through age 30.

The dynamics of churches themselves are increasingly a turnoff for dropouts. In 2007, half (55%) pointed to church- and pastor-related reasons as important in their decision to leave—mostly their impressions of their place in the congregation. But in 2017, 73 percent indicated such grievances were a factor in stepping away.

The percentage of those who said they wanted to keep attending church but dropped out because they were “too busy” actually decreased in the decade between surveys (22% in 2007 versus 20% in 2017). 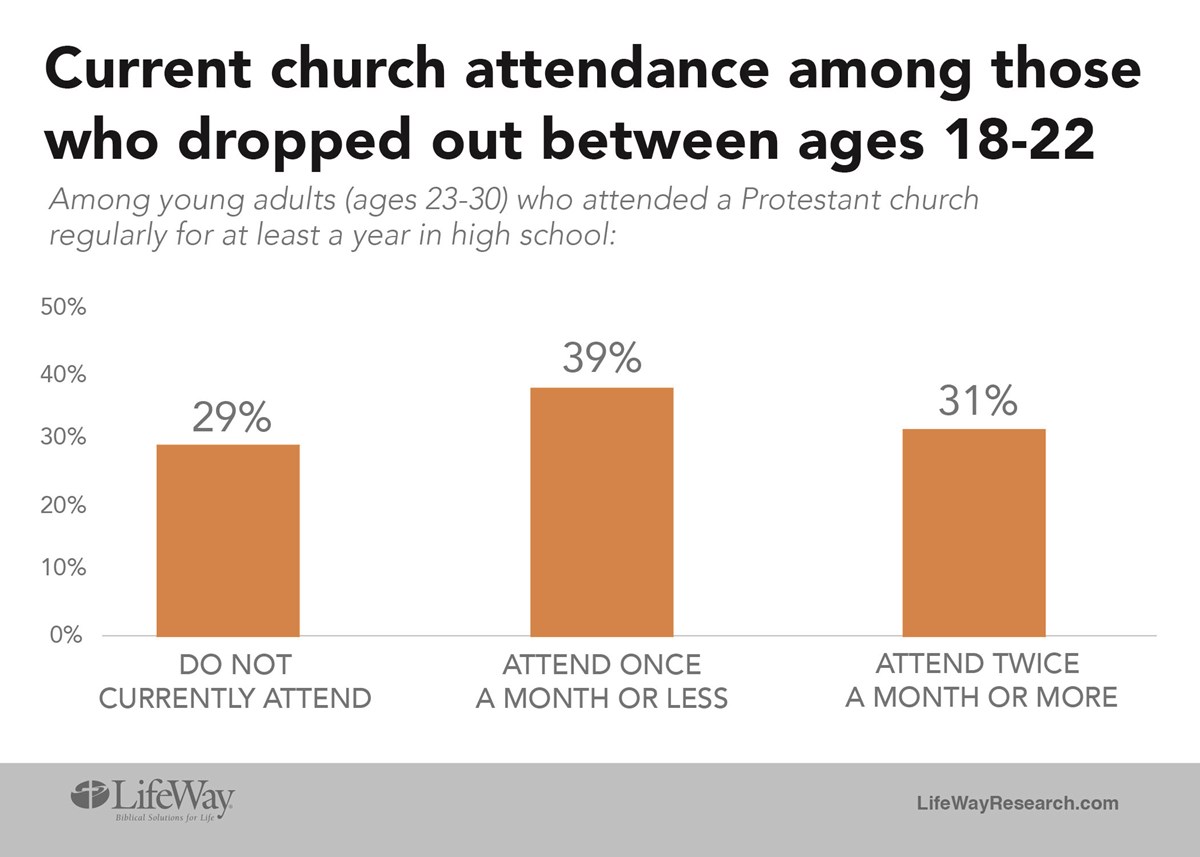 It’s worth noting that most who withdraw from regular attendance are not abandoning the faith outright. Still, a bigger portion of the dropouts cite major shifts in their views of Christianity. While only 10 percent said they left because they stopped believing in God, that’s double as many as ’07.

Of all young adults who used to attend Protestant churches but left temporarily or for good, just 7 percent say they are currently atheists (3%) or agnostic (4%). In contrast, most still consider themselves Protestant (49%) or non-denominational (21%), while 10 percent now identify as Roman Catholic.

There’s more positive news for orthodox Christianity. While most of those who left the church did so for reasons related to personal life changes (like going to college) or frustrations with hypocrisy and politics in church, those who continued regularly attending did so primarily because, they said, “church was a vital part of my relationship with God” (56%) and “I wanted the church to help guide my decisions in everyday life” (54%).

Notably, young Protestants who kept up their church attendance claimed to experience fewer of the social frustrations than those who dropped out. While those who stayed did observe judgmentalism, cliquishness, and a lack of connection in some ministries, they perceived these problems at substantially lower rates than the students who ended up leaving.

And for young Christians who bailed on church but have since returned, the most common reasons were the encouragement of family (37%), the personal desire to go back to church (32%), and the feeling that God was calling them back (28%).