To make an impact among migrants crossing through Texas, churches rely on government advocacy and ecumenical partners.
Bekah McNeel|July 1, 2019 10:53 AM 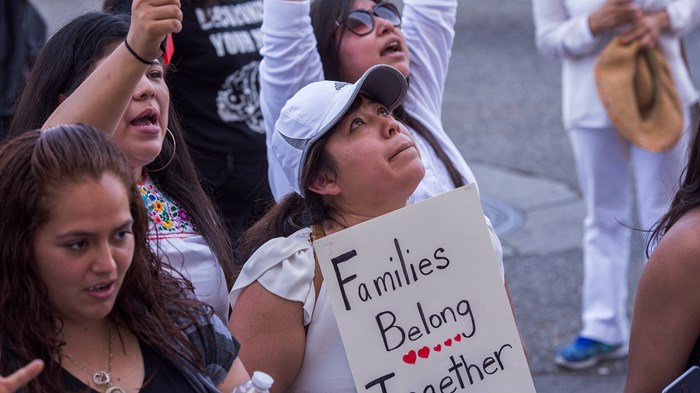 When The New York Times reported on toddlers without diapers and children without toothbrushes at US Customs and Border Protection (CBP) facilities, Christians joined the rest of the country in dismay.

They shared the stories chronicling poor conditions and promoted campaigns to donate money and send supplies, desperate to do something to help. But the facilities at the center of the reports have turned away donations.

This saga has brought new attention to the crises at the border, particularly for children of asylum seekers, and the role of US churches in offering a compassionate response. Where are evangelicals already at work among the latest wave of migrants? What more can be done?

Leaders like San Antonio pastor Max Lucado have urged Christians to pray and act. “This is a mess. A humanitarian, heartbreaking mess. As we are wondering what can be done, let’s do what we are called to do,” he wrote in a lament for CT. “Let’s pray. Let’s lament. Let’s groan.” (You can read a collection of six Christian leaders’ prayers for the border here.)

Grief over the conditions at the border has compelled many evangelical Christians to act, but they prefer to work directly with evangelical mercy ministries.

However, in these moments when the law stands between Christians and acts of mercy—like not being able to drop off donations at a detention center—they can be uncomfortable with idea of supporting government aid or state humanitarian efforts, said Kathryn Freeman, director of public policy for the Texas Baptists’ Christian Life Commission.

“Even for Christians who tend to be leery of government intervention,” Freeman said, to get the diapers and wipes to the children in custody, “the reality is that Congress has to take that up and do it.”

Congress did vote to send money to the border, but the bill does not guarantee money will be dedicated to humanitarian aid. Phone calls are still appropriate, immigration advocates say, to urge the authorities to use the money to improve care for children and families in detention.

Still, some conservative Christians—for both political and spiritual reasons—do not wish to see more funding go to humanitarian aid, which they see as a departure from the role of government.

Those who do want to see humanitarian aid, feel that this is the time for evangelicals to use their political influence.

“As evangelicals, we have been given tremendous freedoms, privilege, and access to power,” World Relief President Scott Arbeiter challenged, “Are we using them on behalf of the poor, marginalized and vulnerable, or are we protecting the status quo?”

Following a visit to the border, National Association of Evangelicals (NAE) president Leith Anderson and other leaders drafted a letter to Congress calling for more a more humane reception on the border. Individuals can sign the letter on the Evangelical Immigration Table website.

Christians in search of exclusively evangelical avenues to help children in detention are likely to come up empty-handed. While some have called on major humanitarian forces in the evangelical world to turn their efforts to the border (like Samaritan’s Purse), the groups having the most impact now are the ones that have been there for years.

Much of the legal and advocacy work is being done by RAICES and the American Civil Liberties Union. Despite their effective work at the border, pro-life Christians often avoid donating to them because of the organizations’ support for abortion rights, Freeman said.

Smaller, issue-specific legal resources like Immigrant Families Together, Kids in Need of Defense, and the United Methodist Church’s Justice for Our Neighbors are alternatives that do not pay for abortions. Immigrant Families Together has referred several women to the International Rescue Committee— which provides contraceptives and post-abortion care to women who have obtained unsafe abortions in countries around the world—but not for services related to abortion.

World Relief, the humanitarian arm of the NAE, offers legal services to credible asylum seekers around the country, once they have been processed at the ports of entry. Getting access to those still in detention or CBP custody is more difficult, said Arbeiter. Once asylum seekers are out of custody, the church has more opportunities to step in and help, Freeman said.

Once asylum seekers have been released into the communities, Christians have more opportunities for direct mercy ministries. However, Freeman said, if they want to stick to evangelical organizations, “it’s going to take a little more work.”

She recommends that Christians who want to support church-specific work contact their denomination to find local congregations with immigrant outreach along the border and channel donations to those churches, many of which partner with other trusted nonprofits.

In Texas, the organizations with the greatest capacity to mobilize and navigate the bureaucratic hurdles of receiving asylum seekers are Catholic, namely Catholic Charities. Annunciation House in El Paso and Sister Norma Pimentel’s Respite Center (which was closed and will be relocated) in McAllen have been the two most well-known respite houses for asylum seekers released on the border.

Also in El Paso, a faith-based community center, Ciudad Nueva, is expanding to minister directly to immigrants, in addition to at-risk youth. The nonprofit supports temporary shelters through a ministry called El Paso Encounters and has created an Amazon wishlist for their most needed items.

In Brownsville, as in many border cities, an interfaith group welcomes migrants at bus stations and on the international bridges. Team Brownsville, made of Christians, atheists, and people of other faiths, passes out food, water, toothbrushes, mats to sleep on, and tarps for shade as people camp on the bridge waiting for their turn to present to US Customs and Border Protection.

In San Antonio, the Interfaith Welcome Coalition organizes to help asylum seekers released from detention make their transit connections at the bus station and airport.

All of the organizations welcome donations and volunteers.

Now is the time to worry less about who we serve alongside, Arbeiter said, and to worry more whether we will be found faithful in standing with the poor and marginalized. Like Israel, he pointed out, Christians are blessed to be a blessing (Gen. 12:2). “When (Israel) failed to do so, they were disrupting the flow of God’s grace,” he said.

Christians often feel compelled to help other Christians, and Arbeiter points out that many of the Central American migrants are professing evangelicals. However, those who wish to join the work cannot discriminate, Arbeiter said, “(Immigrants) deserve to be treated with compassion and dignity regardless of whether or not they are believers.”

At the El Paso-Juárez border with Arbeiter, Matthew Soerens, director of church mobilization for World Relief, witnessed the actions available to those willing to partner across denominations and borders.

“Shelters like the one I visited in El Paso—a retrofitted warehouse, run by a longstanding Catholic hospitality ministry, with a lease paid by an evangelical megachurch,” Soerens wrote, reflecting on his trip. “(They) offer a warm meal, a cot, basic medical attention, a change of clothes, a place for children to play—and a picture of God’s kingdom breaking through the darkness.”

The policy of “metering”—only allowing a certain number of asylum seekers through per day—and the “Stay in Mexico” agreement between the US and Mexico leaves many asylum seekers waiting for months in Mexican border cities, where they are susceptible to violence, trafficking, and cartel exploitation.

Because it is legal to ask for asylum once on US soil, some migrants take their chances crossing the Rio Grande and turn themselves in to border agents. This was the situation that led a Salvadoran man and his family to brave the currents that took his and his baby daughter’s lives, now documented in the wrenching viral photo.

Those who remain in Mexico are exceptionally vulnerable, Soerens wrote, but they are not out of reach for the church.

“Across the border in Juárez, I met Pastor Juan, whose evangelical congregation of thirty hosts 110 migrants each night,” Soerens wrote. “Some sleep on cots between the pews, others on bunk beds. A sign on the wall indicates the elements of society for whom they will fast and pray each day: Tuesdays for organized crime, Wednesdays for the police, etc. In welcoming these ‘strangers,’ he is an ambassador of God’s coming kingdom.”

For unaccompanied minors, the risk of harm is still great after they have arrived in the US. They remain in the government’s care, staying in privately run shelters. Reports of abuse in these shelters have surfaced regularly for years.

Some faith-based nonprofits do have government contracts that give them direct control over the conditions for migrant children in the care of the Office of Refugee Resettlement.

Bethany Christian Services (BCS) coordinates foster care and group homes in Tennessee, Florida, Michigan, Pennsylvania, New Jersey, Maryland, Indiana, and California. They urge Christians serious about caring for migrants to apply to become temporary foster families for the most vulnerable unaccompanied minors or those in the process of reunifying with family after being separated at the border.

BCS also accepts donations and volunteers and has committed to seeking the best circumstances possible for each of the children in their care. Earlier in June, the organization pledged to continue offering recreation and language classes in their group homes, even if federal funding is cut.

Even Americans who don’t think of their city as a border city would be surprised to find how many asylum seekers likely live among them, said BCS vice president for refugee and immigrant services, Dona Abbott. Every local church has the opportunity to minister to the asylum seekers in their community, she explained. “They looking for their brothers and sisters to reach out with comfort.”

The Michigan-based nonprofit works with churches to find foster families to give Christians the opportunity to care for unaccompanied minors. In the states where they are not authorized to provide services, Abbott said, a groundswell of Christians desiring to be foster families could help BCS make the case for expansion.

Working with unaccompanied minors and refugees around the world has put BCS at the center of controversy from all points on the political spectrum—from those who felt they were complicit in family separations to those who feel they are abetting lawbreakers.

“These are some of the messiest situations out there,” said BCS president and CEO Chris Palusky, “but Christians belong at the middle of the mess, because that’s where Jesus would be.”

Christians can help by making the conversation less political, he said, “It shouldn’t be. It should be a no-brainer. These are people fleeing for their lives.”

This article was updated to clarify the position on abortion of several non-profits.