Shift in human rights language could allow for greater acceptance in the Muslim world.
Jayson Casper|July 22, 2019 01:24 PM
Image: US State Department
Heads of foreign delegations participate in the State Department's second Ministerial to Advance Religious Freedom.
From DC to Mecca, Should ‘Human Dignity’ Be the New ‘Religious ...

In his opening remarks at the second US Ministerial to Advance Religious Freedom, Secretary of State Mike Pompeo challenged every major world religion and secular society—and also invited them in.

“We all agree that fighting so that each person is free to believe, free to assemble, and to teach the tenets of his or her own faith is not optional,” said Pompeo last week to the almost 1,000 participants from civil society and more than 100 invited foreign delegations gathered at the US State Department. “Indeed, it is a moral imperative that this be permitted.”

But do all actually agree? A change in human rights language might make the difference.

And could Saudi Arabia improbably become the next champion?

At the first ministerial last year, the State Department invited participating nations to sign the Potomac Declaration and Call to Action, validating a vision of religious freedom grounded in the 1948 Universal Declaration of Human Rights (UDHR).

At a side event during the second ministerial, Knox Thames, the State Department’s Special Advisor for Religious Minorities, spelled out several international cooperative accomplishments. But he told CT that it would have taken far too much negotiation to get other nations to put their pen to the Potomac paper.

The panel, organized by the Religious Freedom Institute (RFI), studied six recent international human rights declarations, including the Potomac one.

RFI’s director for education, David Trimble, emphasized that each generation does well to restate the UDHR, because “language changes” and the once-meaningful 1950s concept of freedom of religion has faded with the millennial generation.

Thus, the term might need to be updated, and panelist Brett Scharffs, director of the International Center for Law and Religion Studies, emphasized one of the six declarations that might be especially helpful in the Muslim world.

The Punta del Este Declaration on Human Dignity for Everyone, Everywhere, was signed in December 2018 in Uruguay by 83 state and civil society representatives—including 11 from Muslim-majority nations.

“Using the term human dignity opened doors that were closed before, because it is a term in the Qur’an,” said Scharffs, noting that the term was also used in the preamble to the United Nations charter.

“A return to this word might rejuvenate the human rights project, which is under threat today.”

The ministerial concerned itself primarily with religious freedom, as this “first freedom” is increasingly restricted for everyone, everywhere. According to the latest study by the Pew Research Center, only 13 percent of nations treat all religious groups “generally the same.”

Pew’s findings cover a ten-year period of study, with religious restrictions rising fastest in Europe. Meanwhile, the Middle East is still home to the greatest restrictions on religion, but its levels have actually been in decline since 2016.

“But they are also understandably worried that a more robust embrace of human rights and religious freedom might lead to the very moral and social chaos they increasingly observe—quite acutely and properly—in Western countries.”

The RFI side event highlighted only one Muslim document: the Marrakesh Declaration, written in 2016 and previously covered by CT (as well as Arab Christian reactions). Its focus was on the protection of religious minorities in the Muslim world.

But other declarations have followed in its wake.

That same year, the Jakarta Declaration was issued from Indonesia, offering cultural heritage as an antidote to Islamic extremism.

In 2017, the Bahrain Declaration denounced “compelled religion” and declared “freedom of choice” to be a “divine gift.” Signed by the head of state, it was more powerful than just the deliberation of scholars.

Last February, Pope Francis and Ahmed el-Tayyeb, the Grand Sheikh of al-Azhar in Cairo, signed the Declaration on Human Fraternity in Abu Dhabi, emphasizing “freedom of belief, thought, expression, and action.” It was signed prior to a 135,000-person Mass, the largest Christian worship gathering ever held in the Arabian Peninsula. 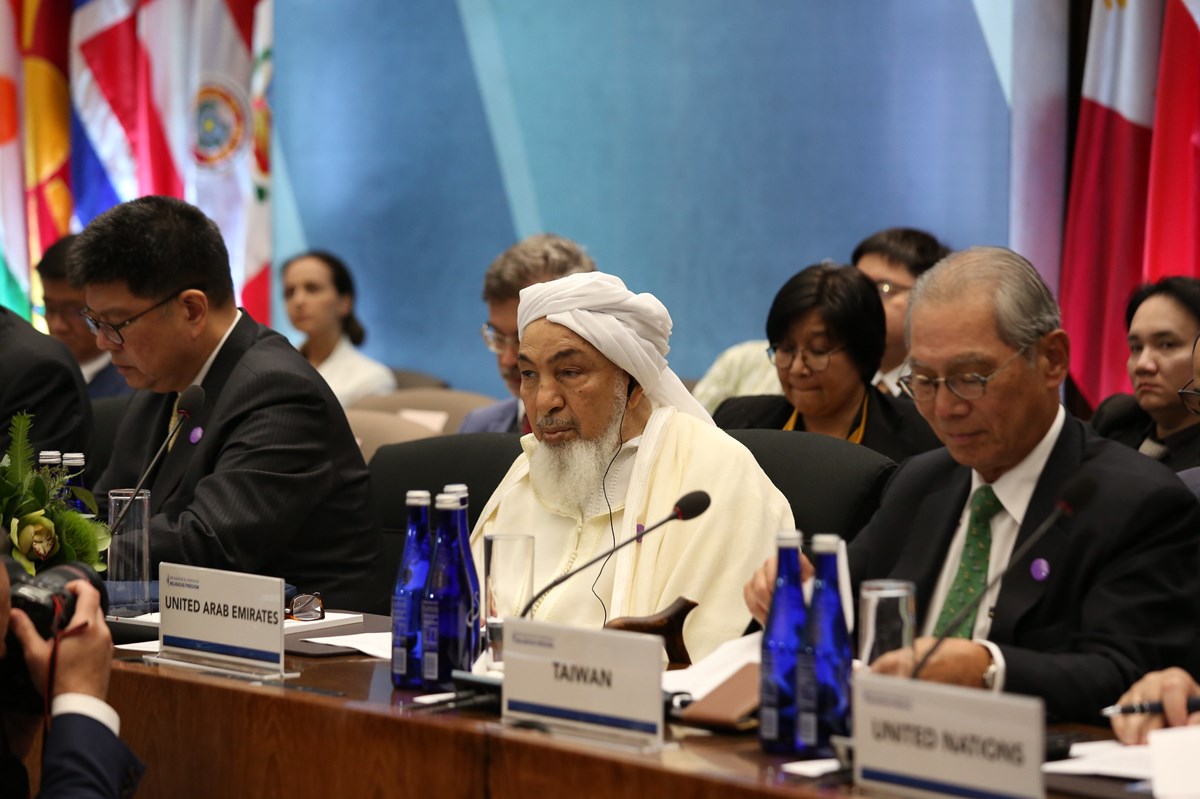 The leading Muslim scholar behind the Arab world efforts is Shaykh Abdullah bin Bayyah, president of the Forum for Promoting Peace in Muslim Societies. He was a keynote speaker at the ministerial, seizing on the concept uniting the Muslim declarations and now reflected in the Western-issued Punta del Este document.

But he did not mention what might be the Muslim world’s most significant declaration—if only because of location.

The above documents were trumpeted abroad, especially in the West, as examples of Muslim fidelity. Much quieter has been the reception of the Mecca Declaration, issued two months ago.

Signed by 1,200 scholars from 139 countries, the 30-point charter was organized by King Salman of Saudi Arabia during the final and holiest days of Ramadan.

The word dignity is mentioned throughout:

“This has broken huge ground,” said Johnnie Moore, a commissioner at the US Commission for International Religious Freedom. “It came from Mecca! It is not what one would expect from the heart of Wahhabi Islam.”

Within this context, Moore found great importance in the Saudi signal to its own establishment that this is the group of scholars—led by bin Bayyah—that they must follow.

“Still, we shouldn’t have outsized expectations,” he said. “Much work remains to be done.”

Salim Munayer, head of the Musalaha reconciliation ministry in Jerusalem, said that Palestinians are aware of the declaration, and hopes it will filter down to the Muslim street.

Like the other declarations, it is a product of the Muslim elite, and Munayer celebrates it as a clear condemnation of terrorism. But he fears it might have been pushed by US pressure on Saudi to reform its image, rather than from internal conviction.

Either way, the Mecca Declaration is not very precise in its language.

“The problem is how can you talk about rights, without defining the interpretation of Islamic sharia?” Munayer said.

“Freedom does need to be contextualized to different cultures. But if not qualified, it might not change anything. Human rights must be based upon more than sharia.”

Paul Marshall, the Wilson Professor of Religious Freedom at Baylor University, appreciated the Mecca Declaration’s emphasis given to contemporary issues—including abortion and non-intervention in the sovereignty of nations. This was unexpected from Saudi Arabia, and helpful.

But he shares Munayer’s concerns. “[The document] has troubling words concerning personal freedom and freedom of speech,” he said. “The rhetoric—equality, diversity—sounds good. But without specifics, we don’t know what it means.”

For example, Point 17 warns that personal freedom must not destroy social mores. Bin Bayyah emphasized this at the ministerial.

There is a “balance between having principles on one hand, and their practical applications on the other,” he said, describing “secondary rights” that he did not define. “[These] must be secured in a gradual and strategic manner that preserves social order.”

Bin Bayyah was clear that religious freedom for minorities is an “uncompromising principle” that must be enshrined in legislation and social values. But “a great deal of wisdom” is required lest pursuit of “an ideal state” annul the social contract—and “create the opposite of what we seek.”

Bin Bayyah’s speech esteemed the UDHR and used its language to make his point. Its Article 29 “qualifies” the prior series of absolute rights, in reference to limitations determined by law to secure morality, public order, and the general welfare.

“These qualifiers provide the leadership of each society with some autonomy,” he said, “and place upon our conception of citizenship a lot of relativity.”

He went on specifically to call for a ban on the denigration of religious symbols. 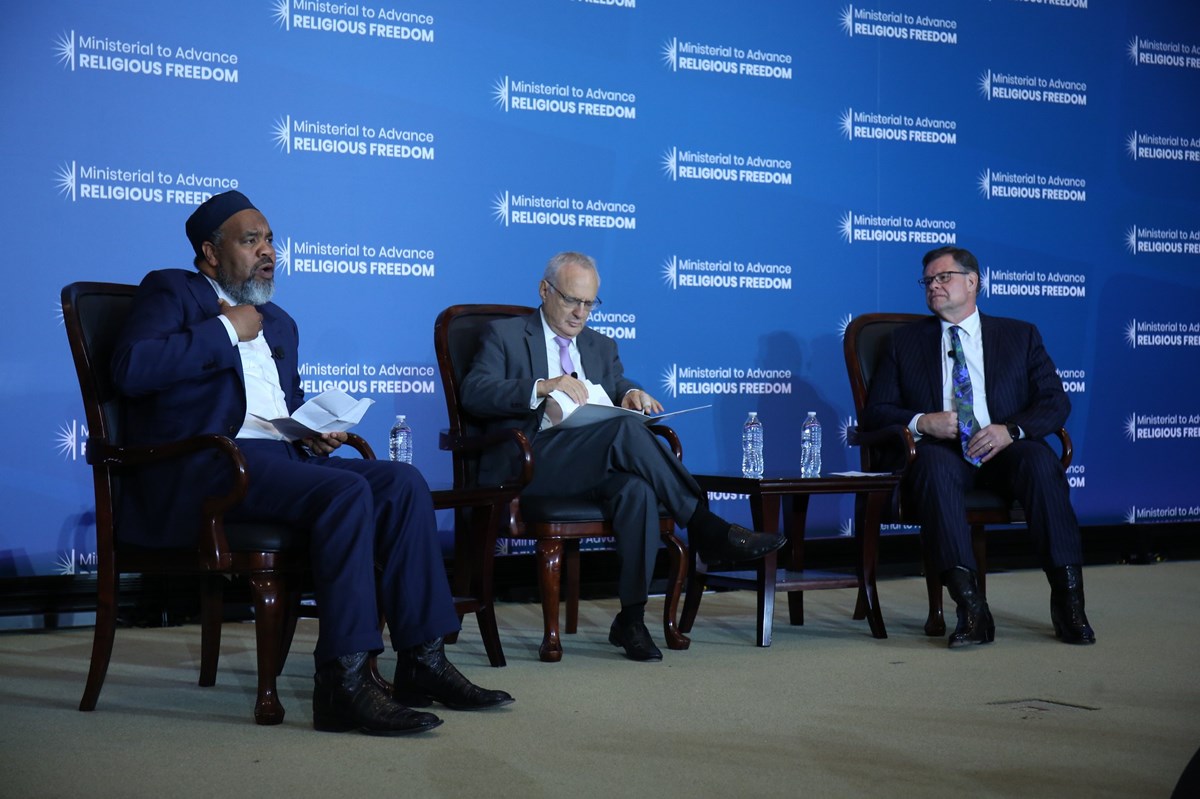 Imam Mohamed Magid (left) and pastor Bob Roberts (right) speak on a panel at the Ministerial to Advance Religious Freedom.

Mohamed Magid, imam of the All Dulles Area Muslim Society outside of Washington, DC, is a disciple of bin Bayyah and a contributor to the Mecca Declaration. He serves 5,000 families across seven mosques—two of which meet in Jewish synagogues, and one in a church.

He said the declaration was meant to be broad enough for interpretation, mindful of local sensitivities, but not limiting in application.

Magid stated he pushed for its Point 29, to demand the declaration be practically implemented.

“Mecca is an action plan of principles that we want the Muslim community to act upon,” the Sudanese-American scholar said, “and to have the world know this is what Muslims believe in.”

Each point can become a conference, and follow-up plans are already under discussion.

“In Muslim countries where there are restrictions against people of other faiths, we have to work hard and push for them to get their religious rights,” he said. “I will use this as my tool to say, ‘Hey, you signed this.’”

All must be done in a manner allowing society to stay in harmony, said Magid. But asked specifically if his interpretation includes the right of conversion, he said: “Absolutely. The Qur’an states there is no compulsion in religion.”

In remarks to close the ministerial, Vice President Mike Pence singled out several nations of the world for their religious freedom violations—including Saudi Arabia. For example, the kingdom has detained blogger Raif Badawi since 2012 on charges of apostasy and insulting Islam.

But as Pompeo opened with an invitation, Pence closed with consensus. And rather than changing language—the word dignity was not mentioned—he chose instead to renew the traditional American creed.

“We’re gathered here, 106 nations strong, because we believe in the freedom of conscience—the right of all people to live out their lives according to their deeply held religious beliefs,” Pence said. “We are, and will forever remain, dedicated to the principle that we are endowed by our Creator with certain unalienable rights—that among them are life, liberty, and the pursuit of happiness.”

But again, do all actually agree? Only six Muslim-majority nations signed the ministerial-ending Statement on Respect for Religion or Belief.

Bob Roberts, pastor of Northwood Church in Texas, urges patience. Deeply engaged with Magid in promoting evangelical-Muslim dialogue, he reminds fellow Christians how long it took the US to develop its own understanding of human rights.

“Don’t try to swallow the whole elephant at once,” he said, referring to Saudi acceptance of the UDHR. “This is our mistake in America. We want everyone to be just like us, overnight.”

Statements mean nothing without laws, Roberts emphasized, and there remain inconsistencies.

“It would be telling if Saudi doesn’t pass some laws,” he said; for example, migrants should be able to worship legally and publicly. “If they were to do just this one, it would make a huge statement to the world.”

But the Muslim world is getting closer, reaching even to the holiest city of Islam. And within this context, he believes the Mecca Declaration is a major development, both forced and forceful.

From DC to Mecca, Should ‘Human Dignity’ Be the ...