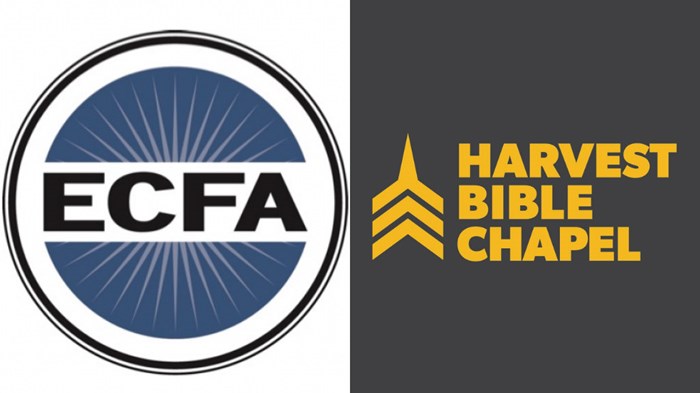 The logos of ECFA and Harvest

Update (April 17): Harvest Bible Chapel has lost its standing with the Evangelical Council for Financial Accountability (ECFA), months after controversy over founding pastor James MacDonald culminated with his firing.

The ECFA board voted today to terminate the Chicago-area church’s membership status due to “significant violations” to 4 out of 7 of the association’s financial standards, citing “direct and substantial evidence” uncovered in the past week.

The association said that Harvest withheld pertinent information about its finances and policies during earlier reviews.

According to the ECFA, Harvest failed to comply with standards around governance, financial oversight, use of resources and compliance with laws, and compensation-setting and related-party transactions [full requirements listed below in previous coverage].

The violations are serious enough that the organization said restoring Harvest’s full membership status was “not a viable option.”

Original post (March 16): Harvest Bible Chapel had its accreditation suspended this week by the Evangelical Council for Financial Accountability (ECFA), after “new information” led to concerns that spending under former senior pastor James MacDonald was in “serious violation” of 4 of the agency’s 7 standards for biblical and ethical financial stewardship.

“During the indefinite suspension, the church may not represent that they are an ECFA member or display ECFA’s membership seal,” wrote president Dan Busby in a statement released Friday afternoon. Harvest used to display ECFA’s seal prominently on its online giving page.

“The investigation has been and will remain ongoing during the suspension as we work to determine whether Harvest Bible Chapel should be terminated, advised of the steps necessary to come into full compliance,” wrote Busby, “or whether they are in fact in compliance with our standards and should, therefore, be restored to full membership.”

On Wednesday, Julie Roys—author of a months-long investigation into MacDonald’s leadership published by World magazine that contributed to his February firing—devoted a blog post to critiquing ECFA’s affirmation late last year that Harvest remained a member in good standing despite what she called “glaring improprieties.”

For example, the church has repeatedly used money donated for one purpose to fulfill other purposes. Money given to Walk in the Word, the broadcast ministry of recently-fired Harvest founder James MacDonald, was used to develop a deer herd at Camp Harvest in Michigan. And $1 million in Walk in the Word funds were used to pay liabilities for Harvest Bible Fellowship when that organization dissolved in 2017.

But on Saturday, I reported what was probably the grossest misappropriation of funds. According to past Harvest executives, MacDonald used church funds to pay for lavish personal expenses, including an African safari, Florida vacation, expensive cigars, and more. What’s perhaps most shocking about this revelation is that not only did the church know and approve these expenditures, so did Harvest’s auditors, Capin Crouse, according to Harvest Elder Bill Sperling.

In Friday’s statement, Busby wrote that ECFA’s board of directors suspended Harvest as of Thursday based on “new information” received on Monday, March 11.

He stated that ECFA “opened a formal investigation” of Harvest on November 28, but “during a site visit to the church in December, we thoroughly examined the information made available to us and believed the church was in compliance with our standards.” [Editor’s note: After the December 10 visit, ECFA reported that Harvest “is in full compliance with each of ECFA’s Seven Standards of Responsible Stewardship and remains a member in good standing with ECFA.”]

However “given the emergence of new information,” Busby stated ECFA now has “concerns the church may be in serious violation of ECFA Standards 2, 3, 4, and 6.”

Every organization shall be governed by a responsible board of not less than five individuals, a majority of whom shall be independent, who shall meet at least semiannually to establish policy and review its accomplishments.

Every organization shall prepare complete and accurate financial statements. The board or a committee consisting of a majority of independent members shall approve the engagement of an independent certified public accountant, review the annual financial statements, and maintain appropriate communication with the independent certified public accountant. The board shall be apprised of any material weaknesses in internal control or other significant risks.

Standard 4: Use of Resources and Compliance with Laws

Every organization shall exercise the appropriate management and controls necessary to provide reasonable assurance that all of the organization’s operations are carried out and resources are used in a responsible manner and in conformity with applicable laws and regulations, such conformity taking into account biblical mandates.

Every organization shall set compensation of its top leader and address related-party transactions in a manner that demonstrates integrity and propriety in conformity with ECFA’s Policy for Excellence in Compensation-Setting and Related-Party Transactions.

Harvest is the only member ECFA has suspended in the past two years. Otherwise the agency has seen members voluntarily resign (such as Harvest Bible Fellowship last October), or it has terminated members for not submitting renewal paperwork, for merging with non-members, or for dissolving completely.

CT reported the last time ECFA terminated a member for cause: when Gospel for Asia (GFA) was determined to be in violation of 5 of 7 stewardship standards in 2015.

GFA, a founding ECFA member, denied wrongdoing and vowed to improve. The ministry later faced a class-action lawsuit over how it handled donations. It settled with plaintiffs—without admitting wrongdoing—earlier this month in return for offering a $37 million refund.

In a March 10 update, Harvest leaders reported the resignation of its entire elder board and a “significant strain” on church finances, stating that tithes and offerings were down 40 percent.

The team announced various changes, including:

“We know trust is earned over time, and we are working diligently to take actions and to communicate in ways that begin restoring trust,” wrote the Harvest 2020 team.

“We also face the reality of our expenses and declined giving,” the team wrote. “If you call Harvest your church home, if this is where God is calling you to be, yet you have stopped giving your tithes, we are asking you to seek the Lord about restarting your giving.”

“This rebuilding of trust, unity, and health as a Christ-honoring church is hard. We cannot do it alone. We need your prayers and your willingness to embrace this new journey together.”

CT will update this post as more information is available.