Why Chinese diaspora churches remain silent while Christians in Hong Kong take to the streets.
D. Cheng|November 18, 2019 09:00 AM 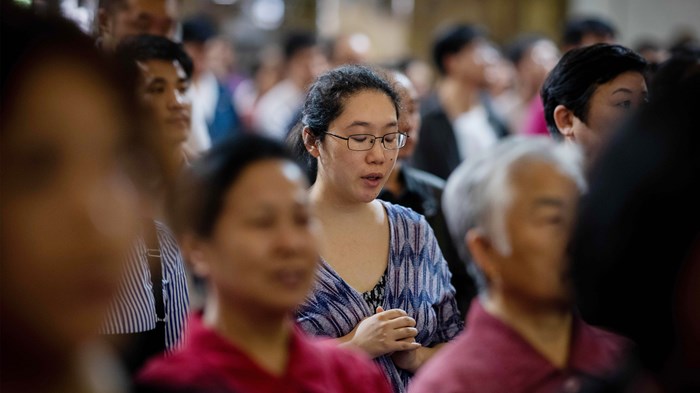 On the afternoon of Sunday, August 18, about 70 people gathered for a prayer meeting at a church in Vancouver organized by the group Vancouver Christians for Love, Peace, and Justice. Their focus was the same as their three previous gatherings: to pray for the ongoing demonstrations in Hong Kong, for those affected, and for human rights and freedom in the city of 7.4 million people.

Before the meeting ended, the Tenth Avenue church building was surrounded by as many as 100 pro-China demonstrators waving Chinese and Canadian flags. The attendees inside, according to a spokesperson, feared for their safety and were escorted out by Vancouver police officers.

This confrontation took place more than 6,300 miles from Hong Kong and six months after Chief Executive Carrie Lam introduced a controversial extradition bill that would allow fugitives to be extradited into mainland China. The proposal was seen as a ploy to grant Beijing more power over the city, setting off large-scale demonstrations that have continued to this day.

While Lam canceled the extradition bill in September, unrest has continued as protesters press for Lam’s resignation, an inquiry into police brutality during the protests, the release of those arrested, and greater democratic freedoms.

The situation in Hong Kong hits close to home for the 500,000 Hong Kong immigrants residing in Canada and the more than 200,000 in the US. Many still have relatives and friends in Hong Kong, which is part of China but governed by separate laws. Others have directly benefitted from the freedoms and opportunities offered by the semi-autonomous region.

Pastor John D. L. Young grew up in Guangdong Province in mainland China, and then spent about six years studying for his doctoral degree in Hong Kong before immigrating to the US. “I have great affection for Hong Kong. My studies in Hong Kong were financially supported by churches there,” Young, who now leads two Methodist Chinese churches in the New York metropolitan area, said in a recent interview with CT. Speaking in Cantonese, he explained, “The church in Hong Kong has given me a lot of support and encouragement. They provide a lot of love and financial support to the church in China also.”

But these deep ties to Hong Kong have not been enough for Chinese churches in North America to take a public stance. Meanwhile, Christians in Hong Kong have played an active role in the protests: marching, offering food and shelter to demonstrators, and attempting to diffuse tensions with the police.

The Hong Kong Christian Council published a strongly worded statement in July, calling for the suspension of the extradition bill and an independent inquiry into police brutality. In contrast, the Chinese church in North America—numbering more than 1,000 institutions in the US alone—has been largely silent.

The choice not to publicly comment on the Hong Kong protests is an intentional one, with Chinese Christian leaders fearing repercussions from both their own congregants and external supporters of Beijing.

According to Fenggang Yang, founding director of the Center on Religion and Chinese Society at Purdue University and author of Chinese Christians in America, the majority of Chinese churches in the diaspora have members who come from different regions of East Asia. “In most congregations, you will find people from Hong Kong, Taiwan, mainland China, and southeast Asia,” Yang told CT. “Ten years ago, mainland Chinese were still a minority in many churches. Now many have a majority from the People’s Republic of China.”

Different origins among ethnic Chinese immigrants can foster different political views, with more Christians from China supporting the policies of the Chinese government, and those from elsewhere often more critical of the Chinese Communist Party. Even among Chinese immigrants from the same place, views on the situation in Hong Kong can diverge greatly depending on age, personal politics, and tolerance for civil disobedience.

“When you have very nationalistic Chinese Christians and more democratic Chinese Christians, it’s hard for them to have any meaningful conversation,” said Yang. At his own home church in Indiana, a longtime member from Taiwan offered a prayer for the situation in Hong Kong, and another member from China immediately filed a complaint with church leaders.

The simplest solution, then, among Chinese church leaders and laypeople in the diaspora, is to remain avidly apolitical. There is a hard-fought sense of unity within Chinese churches, which gather immigrants of diverse backgrounds around shared culture and ethnicity. But this unity can be easily disrupted by discussions of controversial or complex political issues.

The current situation in Hong Kong is particularly fraught, as it presses on uncomfortable questions of sovereignty, nationalism, freedom of religion, freedom of speech, civic responsibility, and personal loyalties.

“Just as Hong Kong Christians most want peace, those in the diaspora also want peace in their churches and in Hong Kong,” explains Justin Tse, a social and cultural geographer and the lead editor of Theological Reflections on the Hong Kong Umbrella Movement, which covers the 2014 protests considered a precursor to today’s demonstrations.

As violence has escalated between Hong Kong protesters, opponents of the demonstrations, and the police, leading to several fatalities and serious injuries in recent weeks, prayers for peace are not inconsequential. Prayers for peace are certainly significant for the number of Hong Kong pastors who are regularly serving as front-line peacemakers in the demonstrations, trying to calm tensions and act as buffers in confrontations between protesters and police

But Tse is concerned that broad statements or prayers about peace have become a proxy for more substantive conversations.

There’s a belief among many Chinese pastors that it’s simply not their place. Chinese churches in North America have generally stayed out of partisan debates, with the notable exception of being vocal opponents of same-sex marriage.

Joseph Chun, a Hong Kong native who is now the senior pastor of First Chinese Baptist Church, San Gabriel Valley, said that he has his own personal views of the demonstrations in Hong Kong. “But I would not influence my people to have the same opinion I have,” he told CT. “That is not my role, to press my opinion upon my people that I am shepherding.” Instead, he focuses on teaching them biblical principles, such as what is evil and good and merciful, and lets them make up their own minds.

Several Chinese pastors in the US declined to be interviewed for this article, citing similar reasons: They don’t want to speak for their congregations; they don’t want to risk harming the unity of their community; they don’t feel like they know enough; or they haven’t discussed the Hong Kong protests at all with their churches.

Kevin Xiyi Yao, a native of mainland China who is now an associate professor of World Christianity and Asian Studies at Gordon-Conwell Theological Seminary, understands why Chinese congregations in North America choose not to take sides on controversial political issues. But, in this case, he believes they’re missing an opportunity to address a fundamental challenge that extends beyond current events and plagues Chinese people as a whole: a strong prejudice against other Chinese based on language, culture, and geographic origin.

In the current demonstrations, “I would say there is a lot of rhetoric and mentality of parochialism and outright discrimination,” he told CT in a recent interview. Among many Hong Kong protesters, there is an overt bias against people from mainland China. Many mainland Chinese, in turn, see Hong Kongers as entitled troublemakers. Such prejudices are often brought into Chinese churches in the diaspora—but they aren’t discussed.

Addressing such biases “could be painful in the short term, but in the long term it’s good for the health of the church, to make the church stronger. If you want to cover it over to maintain the peace on the surface, then you end up with a weak church,” said Yao. As an alternative, he recommends that church leaders “talk about what reconciliation means. Let’s talk about issues of social justice. What’s the Christian vision of a just and peaceful society?”

For now, these kinds of conversations are rare among North American Chinese churches. And while church leaders fear that speaking out about Hong Kong or other hot button topics could drive out members, silence could very well have the same effect.

Tse, for example, is part of a group of second-generation Chinese Americans and Chinese Canadians who left the evangelical church after its refusal to address the 2014 Umbrella Movement in Hong Kong.

As the few churches and Chinese Christian leaders who have spoken out have discovered, there are risks to being vocal. Tse knows of several congregations that support the Hong Kong protests, including his own Eastern Catholic congregation in the suburbs of Vancouver, that have been visited by strangers who photographed all the attendees and posted their images on social media. Others, like Vancouver Christians for Love, Peace, and Justice, have been harassed by pro-China demonstrators.

It’s also common for Chinese churches in the diaspora to be connected to ministries and Christian leaders in Hong Kong and China through giving, missions work, and denominational ties. They fear that if they become known as outspoken pro-democracy advocates, their partners could face harassment and oppression by Chinese authorities.

And yet refusing to engage with current events, especially when it concerns human rights and social justice, comes with its own costs, according to Tenth Church senior pastor Ken Shigematsu. “There’s a danger in being politically partisan, but there’s also a danger in not speaking out prophetically and boldly on the issues of our day,” he told CT. “And I would say that’s an even greater danger.”

Despite the incident on one of his church’s five sites back in August, Shigematsu continues to encourage prayer and dialogue about the demonstrations in Hong Kong within his multiethnic congregation. He hopes that more pastors will do the same.

“I would say that it’s important to be informed on the issues, to be praying for wisdom and discernment. But when we see human rights violated, intimidation and violence, I believe that it’s important as pastors to speak out against those kinds of injustices,” he said. “There sometimes is an overlap between justice issues and political issues. When that happens, we’re not going to shy away from the issue. We’ll sometimes wade into controversy.”

Praying for Hong Kong Can Be Politically ...