As Trump administration changes US policy on Jewish settlements, Palestinian council head urges prayer for all.
Jayson Casper|November 27, 2019 09:00 AM 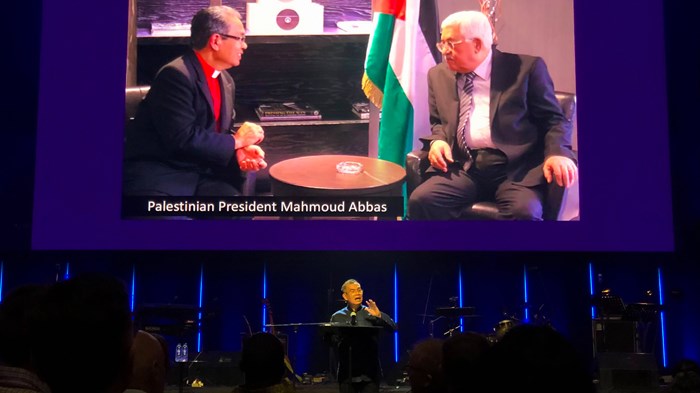 After 12 years of waiting, evangelicals in Palestine now claim they have greater civil rights than their fellow believers in the Holy Land.

Earlier this month, the president of the Council of Local Evangelical Churches in the Holy Land—which represents congregations and ministries located in the West Bank, East Jerusalem, and the Gaza Strip—triumphantly held aloft his evidence at the once-a-decade general assembly of the World Evangelical Alliance (WEA).

“Here is the presidential decree signed by … President Mahmoud Abbas,” Munir Kakish told the approximately 800 WEA delegates from 92 nations gathered in Bogor, Indonesia. “Our hearts are full of thankfulness to God for this new declaration.”

When the Palestinian Authority (PA) was created in 1994 following the Oslo Accords, pastors of local evangelical churches met to create a council in order to have a voice with the new government, Kakish told CT.

“I knocked on [the PA’s] doors many times,” he said. “But now the timing was right, and the personnel … were understanding.

“Most of all, it was our persistence to obtain our civil rights as Palestinian citizens.”

Over time, the council—which Kakish has led since 2007—gained credibility as he introduced evangelical leaders from around the world to local stakeholders. At this month’s assembly in Indonesia, he thanked WEA president Efraim Tendero and executive adviser Deborah Fikes.

Founded in 1846, the WEA represents an estimated 600 million evangelicals through affiliates in 129 countries and before the United Nations, the Vatican, and other key groups.

“Christians all over the world are suffering for their faith,” said Tendero, celebrating onstage with Kakish.

“It is gratifying to know that we play a significant role in standing up for them and encouraging them.”

The new legal status allows evangelical churches in Palestine to issue marriage licenses, to open church bank accounts, and to purchase land in the name of the church. Previously, churches were registered in the name of local believers, which complicated property ownership when those believers died.

“This decree protects the assets of the church,” Kakish said of the 23 member organizations in his council. “Now we are nearly equal with the traditional churches.”

All they lack is an ecclesiastic court; however, Kakish believes any cases can be settled through the civil courts or in cooperation with other recognized churches.

Recognized since the Ottoman period and subsequent British mandate, the traditional churches were unsure about recognizing the younger council and uncertain about its goals. Within the political realm, evangelicals suffered “severe tension,” said Kakish.

“We had to show that we were not connected with the extreme evangelical political positions found in the West,” he said. “US politics affect us greatly.”

Kakish told CT it was a “sad day” in Palestine, as the United States shifted its legal position last week to no longer recognize Jewish settlements in the West Bank as contrary to international law.

Thousands of Palestinians rallied to protest the decision.

“We will be doing damage control, as people immediately associate all evangelicals with these decisions,” he said. Instead, he emphasizes both the international scope of evangelical faith and the local impact of their schools and ministries.

Kakish, who lost his father at age 10, now oversees an orphanage and child services center in Ramallah.

The US State Department’s latest report on international religious freedom estimates 50,000 Christians live in the Palestinian territories, out of a population of 4.6 million. Most reside in Bethlehem, Ramallah, and Nablus.

The Palestinian Basic Law—which has functioned as an interim constitution since 2002—recognizes Islam as the religion of the state and sharia law as the primary source of legislation.

But it also provides for freedom of belief, worship, and the performance of religious rites, while forbidding religious discrimination and assigning a minimum quota of 6 seats in the 132-member parliament. A presidential decree requires a Christian head for 10 municipal councils.

But it does rank the Palestinian territories at No. 49 on its worldwide list of the hardest places to be a Christian, as they are “caught in the middle” of the Palestinian-Israeli conflict.

Formal, legally registered conversion from Islam to Christianity is not permitted, Kakish said, but he is able to engage in personal witness. Muslims are free to attend church. But any public evangelistic campaign would not be acceptable.

“We welcome any positive steps towards improving the rights of evangelicals living under the [PA],” said Harry Tees, general secretary of Evangelical Alliance Israel (EAI), a fellow WEA member.

“But we pray for the day when governments in the region will recognize every person’s absolute freedom of religion, including his or her right to change their religion.”

The civil rights status of Palestinian Christians, now including evangelicals, does not conform to modern conceptions of human rights, Tees said. Instead, it is a holdover of the Ottoman sect-based millet communities, which kept Christians in second-class status.

“Christians have lived under a religious caste-like system for centuries,” he said of Palestine and other areas of the Arab world. “While it has provided certain protections, it remains highly discriminatory.”

The same basic system registers 10 historic churches in Israel. Though the EAI has sought registration in the past, Tees would like the alliance to avoid it altogether. Established in 1956 under a different name, its 33 churches and ministries are registered under the Israeli equivalent of a 501(c)3.

“We live in very different realities,” said Tees, emphasizing that in Israel, evangelicals do not seem to lack any civil freedoms.

But Botrus Mansour, chairman of the Convention of Evangelical Churches in Israel (CECI), an associate member of the WEA, would like to be recognized by the Jewish authorities. The legal path goes through either the prime minister’s office or the ministry of interior; however, CECI’s application was refused, so it is now exploring cooperation with the recognized Anglican church.

Formed in 2005, CECI consists of five evangelical denominations, including Baptists, the Assemblies of God, the Open Brethren, the Nazarenes, and the Christian and Missionary Alliance. Some of these denominations have overlapped with the EAI, which also includes foreign-based Christian ministries and Messianic Jews.

As in Palestine, Mansour believes recognition by the government would help with personal status issues: marriage, divorce, and inheritance. He recognizes that some believe it would violate their traditional stance of separation from the state, and could limit evangelism.

However, Mansour does not share these fears, believing recognition in Israel would increase their community credibility. He congratulates the Palestinian council on their achievement.

“It is a pity that Israel, which claims that its best friends are evangelicals, has not taken the same approach,” he said.

But for Palestine, the only challenge in building churches is lack of funds, said Jack Sara, president of Bethlehem Bible College. One year ago, he became the WEA chairman for its newly formed Middle East and North Africa region.

He has also lobbied on behalf of the Palestinian council, and believes programs like his Bible college’s Christ at the Checkpoint conferences have helped demonstrate that evangelicals are neither an American transplant nor apathetic to the struggles of the Palestinian people and their fight for justice.

And now recognition gives their churches a firm legal standing.

“There will not be any limitations at all, but further freedom,” Sara said. “The PA is trying hard to make sure the Christians are included and an integral part of the fabric of the Palestinian society, although they are small in number.”

And as for evangelism, WEA president Tendero hopes that the patient path of achieving official recognition will help pave the way.

“[Our] advocacy is essential to our goal of enabling the gospel to be preached throughout the world,” he told delegates at the assembly.

“As a matter of principle, [we] support religious freedom for all people, not just Christians. In doing so, we gain respect and partners for our efforts.”

And for Kakish, fulfilling the Great Commission is the most important of many priorities. It just takes unity.

“Jesus called us to be peacemakers, not dividers,” he said. “Pray for the peace of Jerusalem, and all the peoples in the Middle East.”