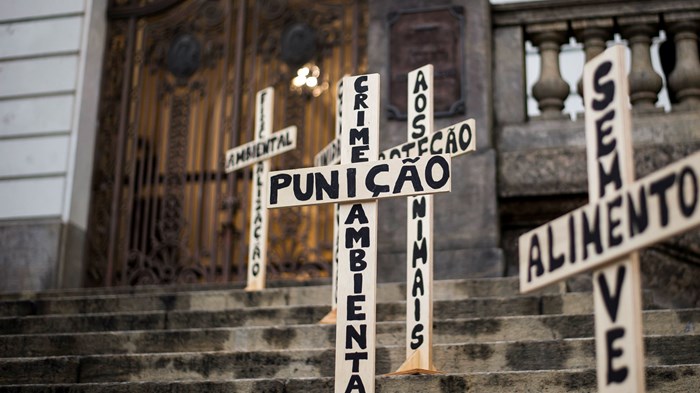 The conservative, populist politician initially dismissed the outcry before political pressure led him to declare a 60-day ban on land-clearing fires in late August—but not before Catholic authorities in Brazil criticized Bolsonaro’s leadership on the issue, and the Ecumenical Forum ACT Brazil, a blend of Protestant and Catholic leaders, blamed the administration’s policies for “a surge in devastation of the environment.”

Yet many evangelicals, who make up about a quarter of the country’s population, have come to the president’s defense, dismissing the fires as normal rather than the crisis international officials and media have made them out to be. (Bolsonaro, a Catholic, is married to an evangelical and attended a Baptist church for a decade.)

While Catholic leaders assert pressure on Bolsonaro’s regime to bolster protections of the Amazon jungle—one archbishop called the scorching a “true apocalypse”—and the papal synod is expected to denounce the situation, many evangelicals and Pentecostals said the fires had been hyped to target the president.

“The evangelical response is very much determined by the voice of the present government,” Valdir Steuernagel, chair of the board of World Vision Brazil and ambassador of the Brazilian Evangelical Christian Alliance, told CT.

He described a tense, aggressive political environment in Brasilia and across the Amazon basin. Evangelicals, most of whom position themselves as allies of the administration, have aligned their voices with Bolsonaro, who has been challenged for downplaying environmental concerns and rolling back some forest protections.

Among the evangelical churches sprouting in remoter parts of Brazil’s heavily forested areas, Christians expressed mixed feelings. There have been tears over the flames that threaten the jungle, but some places have also experienced new prosperity as a result of the business activity in the region. For them, economic flourishing has been pitted against creation care.

The evangelical outcry has not come from church leaders in the Amazon or among indigenous pastors. Instead, they say the fires in their area are no larger than before. Speaking with the Religion News Service, Leonardo Cortez, an Assemblies of God pastor in Cacoal, a city in the Amazon state of Rondônia, attributed the blazes to natural causes and the crises to political clashes.

“The environmental activists don’t understand that we take from the Earth a great part of our livelihood and of the commodities Brazil exports,” he said. “So it’s necessary for us to achieve a balance.”

The upcoming Vatican synod approaches the environmental concerns around the fires as a major part of the sustainability of the Catholic Church in the Amazon and among indigenous communities, as the National Catholic Reporter noted. The gathering will focus “first on lifting up the voices of the people of the Amazon, then on the need for a new, integral ecology in the face of so much environmental destruction, and finally on the challenges the church in the region faces in being more prophetic.” Meanwhile, Bolsonaro reportedly dismissed the synod’s “leftist agenda.”

A vocal minority of Brazilian evangelicals have joined Catholic leaders who have spoken up in favor of stricter environment protections and in opposition to some of the president’s policies.

The Brazilian Evangelical Christian Alliance released a manifesto in defense of the environment and affirming a rooted creation theology, expressing hope that the government would listen.

“As Christians responsible for ‘caring for the garden,’ we expect from our rulers a consistent environmental policy,” states the manifesto. “We are currently witnessing governmental demonstrations that minimize the destruction of our ecosystem with visible consequences for the climate and survival of the planet.… Making the forest unfeasible by deforestation and burning is decreeing the death penalty for various ecosystems of our country and the planet. It is time for unity. More than political ideologies and economic interests, we need to defend life.”

Perhaps the most prominent evangelical voice speaking for the protection of the Amazon and condemning the policies of the Bolsonaro administration is that of former Brazilian environment minister and one-time presidential hopeful Marina Silva.

“The fires in the Amazon are a crime against humanity,” said Silva, a member of the Assemblies of God. “The Brazilian government is undoing all the environmental policies that previously existed.”

“We’ve had fires and deforestation under every government, but with the difference that [before] you had environment ministers… who were genuinely committed to protecting the forests, biodiversity, and our water resources,” she stated.

Barely a decade ago, Brazil was considered a conservation pioneer as its government implemented protections for the Amazon and policies for sustainable development. Illegal mining and logging operations responsible for harsh deforestation campaigns were halted, balancing increased rainforest health as well as an uptick in agricultural production.

Now the tide has turned. Within hours of taking office in January, Bolsonaro transferred the responsibility for the regulation and development of reserves for the Amazon’s native tribes to his ministry of agriculture.

Silas Malafaia, a celebrity Pentecostal pastor and televangelist, and an ardent supporter of the Bolsonaro administration, backed the shift, dismissing critiques from other nations. “We’re going to preserve everything because the gringos destroyed what they had?” he asked.

With a strong base of agribusiness and evangelical, neo-Pentecostal backers, Bolsonaro— nicknamed the “Trump of the Tropics”—has not been afraid to take on foreign leaders, especially in Europe, who condemn his policies. His strong rhetoric has solidified his following and his opponents alike.

“The wings of the evangelical church who have allied themselves unconditionally with the left and right agendas have lost all respect and with the constant exposure of the wrongdoers on both sides,” Augustus Nicodemus, pastor and theologian in Sao Paulo, wrote for The Gospel Coalition (Brazil). “The Christian church has lost its public discourse.”