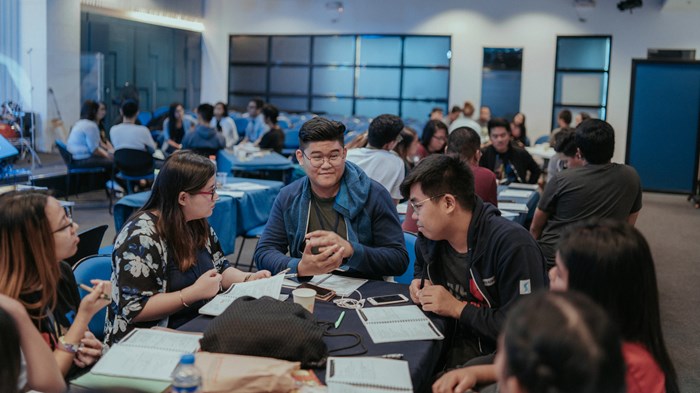 Has faith faded from public schools, or do today’s religiously unaffiliated teens simply overlook it?

Evangelical students notice far more Christian expression in US public schools than their peers do overall and are more willing to engage in conversations with their friends about what they believe, according to a new report out today from the Pew Research Center, the first of its kind.

The release coincides with Focus on the Family’s sixth Bring Your Bible to School Day, when half a million teens are expected to bring a Bible to school as a way to celebrate First Amendment freedoms and share their faith. If the survey is any indication, evangelical public school students are far more likely than their religiously unaffiliated peers to notice the flood of Bibles.

“There are substantial differences in what [religious expressions] students tend to see in public school depending on the student’s religious affiliation,” Pew’s report states. But “it is not completely clear what accounts for such large differences.”

Evangelicals’ heightened awareness of faith expressions could be influenced by a “tendency to have religiously similar friendship circles,” according to Pew researchers. Alternately, “religious and nonreligious teens may perceive the world somewhat differently: What may appear as a religious expression to an evangelical Protestant teen may not even be noticed by a nonreligious teen.” 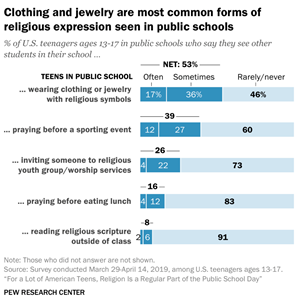 The biggest gap between evangelicals and fellow students is over whether they actually talk about their faith with their friends at school. A majority of evangelical teens (59%) say they do, compared to fewer than half of mainline Protestants, a third of Catholics, and about one-in-five religious nones.

Richard Ross, a youth ministry leader for five decades, said he has observed a decline in religious expressions at public schools, but he blames Christian adults rather than students.

Almost all evangelical denominations and parachurch groups “are seeing changes in the ways youth ministers are challenging their teenagers,” said Ross, professor of student ministry at Southwestern Baptist Theological Seminary. On average, “younger youth pastors have softened their call to students to have gospel conversations at school” and “are not networking their efforts in order to establish evangelistic campus clubs on school campuses.” 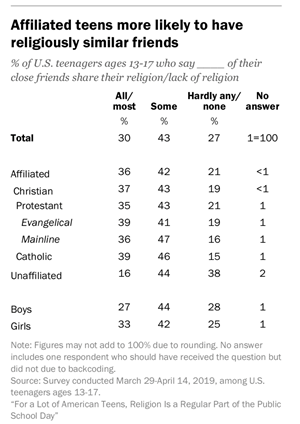 As a result, he said, “teenage baptisms in almost every evangelical group are dropping precipitously."

A majority of teens in general (82%) and evangelical teens (64%) say there are no religious support or prayer groups that meet in their school.

Legal rights around faith in schools

Religious persecution is an issue in public schools, Pew found, but only in a limited manner. A full 86 percent of teens in general and 82 percent of evangelicals say they rarely or never witness students in their school being teased or made fun of because of their religion. 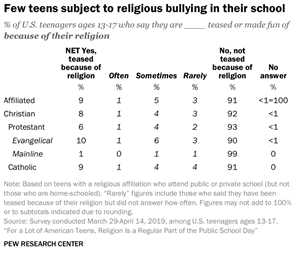 Some public schools, Sharp said, have attempted to bar Christian clubs from requiring their leaders to be Christians, but those cases have not gone to court. Similar cases have been litigated in higher education.

Pew found teens know the law well when it comes to teacher-led class prayer. Eighty-two percent stated correctly that the practice has been ruled unconstitutional by the US Supreme Court. Nonetheless, 41 percent of teens in public schools, including 68 percent of evangelicals, said they view teacher-led prayer in class as appropriate.

The Supreme Court ruled in 1962 that teachers and administrators cannot lead prayers in public schools. In 2000, the court prohibited school districts from sponsoring student-led prayers at football games.

Still, 8 percent of teens said they have had a public school teacher lead a class in prayer. More students in the South (12%) have witnessed teacher-led prayer than in any other region. Students reported teacher-led prayer at lower rates in the Midwest (7%), West (6%), and Northeast (2%).

Sharp urged students to know their rights of religious expression in public school, which “are much more broad than people realize.”

While 82 percent of evangelical teens attend public school, evangelicals have the highest homeschooling rate (11%) of any religious group surveyed.

Although no similar data on public school religious expression exits from past years, Gallup polls have shown a gradual decline in support for school prayer. Support for student-led prayer at graduation programs declined from 83 percent in 1999 to 75 percent in 2014. Support for daily spoken prayer in the classroom declined from 70 percent to 61 percent over the same period.