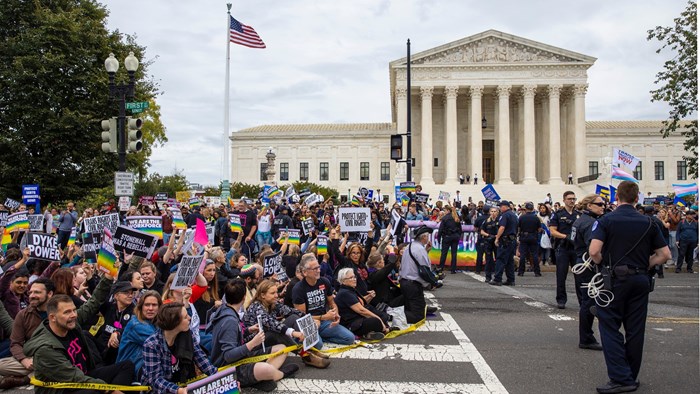 “While other employers in other cases may raise free exercise arguments that merit careful consideration, none of the employers before us today represent in this Court that compliance with Title VII will infringe their own religious liberties in any way.”

In his dissent, Justice Samuel Alito stated that religious freedom protections in employment are already narrow and disputed with the ongoing debate over which employees fall under the ministerial exception. “The position that the Court now adopts will threaten freedom of religion, freedom of speech, and personal privacy and safety,” he said.

“Churches that take an adverse action against an employee or applicant for employment based on religious considerations should describe their action appropriately,” Hammar said. “Refer to the religious or doctrinal principle at issue, and avoid generic labels like ‘sex’ or other gender- or sexuality-based labels.”

Russell Moore, president of the Southern Baptist Ethics & Religious Liberty Commission, wrote that the ruling will have “seismic implications for religious liberty, setting off potentially years of lawsuits and court struggles, about what this means, for example, for religious organizations with religious convictions about the meaning of sex and sexuality.”

“This Supreme Court decision should hardly be surprising, given how much has changed culturally on the meanings of sex and sexuality,” he said. “That the ‘sexual revolution’ is supported here by both ‘conservatives’ and ‘progressives’ on the court should also be of little surprise to those who have watched developments in each of these ideological corners of American life.”

Original post (October 9): The United States Supreme Court was debating the meaning of the word sex on Tuesday when Chief Justice John Roberts brought up religion. He called it “that other concern”—religious liberty.

Roberts asked: How can the government protect the rights of gay, lesbian, bisexual, and transgender employees in the workplace and the rights of religious groups to employ people who agree on issues of sexuality, sexual orientation, and gender identity?

In all three, the court is considering whether the 1964 Civil Rights Act protects LGBT people from getting fired. Title VII of the law says employers cannot dismiss people “because of sex.” The court has to decide whether sex includes sexual orientation and gender identity.

The defendants—Gerald Bostock of Georgia, Don Zarda of New York, and Aimee Stephens of Michigan—say it does.

Bostock was a child welfare services coordinator for the Clayton County, Georgia, juvenile court system, who said he was fired for his sexual orientation after his employer learned he joined a gay men’s softball league. Zarda—who died before his case got to the Supreme Court—was a skydiving instructor who lost his job after he told a female student he was gay. Stephens was a funeral director for R.G. and G.R. Harris Funeral Homes and got fired after coming out as a transgender woman. Stephens’ employer said she was in violation of the dress code, which requires men to wear suits.

Bostock, Zarda, and Stephens' lawyers all argue they should have been protected by Title VII.

Bostock’s lawyer made the case that discriminating against people in same-sex relationships is a form of discrimination based on sex. She asked the judges to imagine two employees who both got married the same weekend, each to man named Bill. “When you fire the male employee who married Bill and you give the female employee who married Bill a couple of days off so she can celebrate the joyous event,” the lawyer said, “that's discrimination because of sex.”

According to Stephens’ lawyer, “a dress code that distinguishes on the basis of sex obviously is because of sex.”

The other side says that’s obviously not what the law meant when Congress passed it in 1964. They argue no one was thinking about sexual orientation or gender identity at the time, so the statute should not be interpreted to protect LGBT people from discrimination.

John Bursch, an Alliance Defending Freedom attorney who represents the Christian owner of the funeral home that fired Stephens, appealed to “those types of things everyone would have understood Title VII” to mean “at the time of its enactment.”

A number of major evangelical groups, including the National Association of Evangelicals, the Billy Graham Evangelistic Association, and the Council for Christian Colleges and Universities (CCCU), have also added that expanding the definition of “sex” to protect LGBT rights could interfere with the employment practices of churches and Christian institutions.

Becket Law, which takes on religious liberty cases, told the court that expanding the definition of sex would “trigger open conflict” with faith-based employment practices.

The evangelical groups argue there should be laws to protect LGBT people in the workplace, but those need to be balanced with protections for religious groups.

More than 20 states have already done this, passing laws against discrimination on the basis of sexual orientation and gender identity, but with exemptions for religious employers. The statutes give religious groups some leeway to discriminate. (The CCCU is among the evangelical groups who have pushed for legal solutions to protect both LGBT and religious rights, nicknamed “Fairness for All.”)

Luke Goodrich, an attorney with Becket, said legislatures can craft the laws with all these considerations in mind, whereas courts can only interpret the law on a case-by-case basis. When judges try to legislate, he said, it creates problems.

“The bottom line is that, regardless of your position on the expansion of rights for LGBT people, the court is not the place to do it,” Goodrich said. “If you don’t do it legislatively, then you have to fight out each case in court and you have tons and tons of lawsuits.”

LGBT advocates, on the other hand, argue it shouldn’t be up to a vote whether or not people can be legally fired because of their sex, sexual orientation, or gender identity.

Justice Sonya Sotomayor also argued the court’s decisions about the legal definition of “sex” actually wouldn’t affect religious groups, because there are already laws that protect them. She specifically mentioned the “ministerial exception” that protects the rights of churches to hire and fire clergy, but doesn’t apply to religious non-profits or small Christian companies.

These are also the first LGBT cases to go to the court after Justice Anthony Kennedy’s retirement. Kennedy was the deciding vote and author of the majority opinion in the four most significant LGBT cases: Romer v. Evans in 1996; Lawrence v. Texas in 2003; United States v. Windsor in 2013; and Obergefell v. Hodges in 2015. He has been replaced on the court by Brett Kavanaugh, a Donald Trump appointee who is expected to vote with the conservative majority.

Thomas Berg, a religious liberty expert and a professor at the University of St. Thomas in Minnesota, said the question is whether or not LGBT advocates can find a swing vote. Berg said they could possibly convince one of the conservative justices with their “textualist” reading of the plain meaning of the words “because of sex.” Justice Neil Gorsuch, another Trump appointee, has described himself as a textualist.

The court will issue its ruling by the end of the term in June 2020.