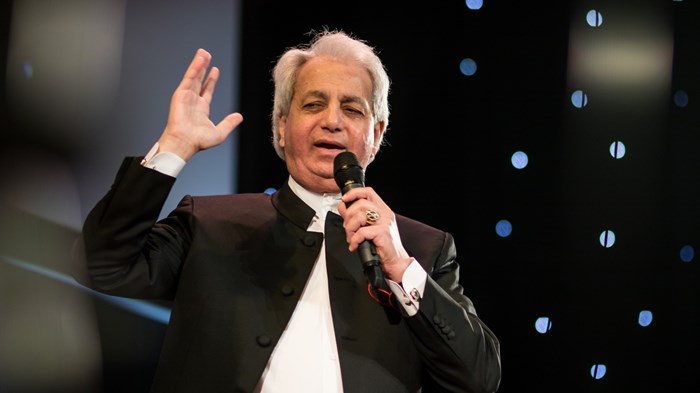 Benny Hinn says he is done with the prosperity gospel. But longtime observers are not ready to take his word on faith.

Hinn has been a leading proponent of prosperity gospel theology since the 1980s, teaching that God rewards active faith with health and wealth. But on September 2, during his 3-hour, 50-minute weekly broadcast, Hinn said he had changed.

Hinn said he now believes such give-to-get theology is offensive to God. He specifically repudiated the practice of asking for “seed money,” where televangelists tell people that God will bless them if they give a specific dollar amount. Hinn himself has done this numerous times, promising God will give material blessings in exchange for a gift of $1,000. On Monday, he said he wouldn’t do it anymore.

“I think giving has become such a gimmick,” Hinn said. “It’s making me sick to my stomach. And I’ve been sick for a while too. I just couldn’t say it. And now the lid is off. I’ve had it. You know why? I don’t want to get to heaven and be rebuked.”

Some of the Christians who have watched him closest, however, viewed the apparent renunciation with skepticism. While they want to be open to the possibility of true repentance, and say God could have changed Hinn’s heart, they are waiting for some evidence of his transformation.

“I think time will tell whether this is a minor correction, something for publicity, or the beginning of a new trajectory towards greater maturity,” said Charles Self, a professor of church history at Assemblies of God Theological Seminary (AGTS). “I’m taking a wait-and-see perspective, because we’ve been down this road before.”

Down This Road Before

Hinn rejected the prosperity gospel for the first time in the late 1980s and again in the early ’90s, and there were reports at the time that he had really changed. He went on to preach prosperity again.

Hinn has also ventured unorthodox descriptions of the Trinity, which critics called “tritheism,” but he corrected his theology when the criticism got to be too much. He joined the Assemblies of God for a while, accepting the oversight of the Pentecostal denomination, but then separated and went back out on his own.

Hinn’s financial practices have also been investigated twice by the federal government. The US Senate launched an investigation of Hinn, along with Joyce Meyer, Kenneth Copeland, Creflo Dollar, Paula White, and Eddie Long in 2007. Sen. Chuck Grassley (R-Iowa), then chair of the Senate Finance Committee, was shocked by the lavish lifestyles of American prosperity preachers, and expressed concern the IRS wasn’t doing its job enforcing existing rules against excessive compensation for leaders of religious nonprofits.

Hinn, according to some estimates, was receiving tens of millions of dollars in donations every year. He told ABC’s Nightline in 2009 that his salary was more than $500,000 annually. An exact figure is unknown. Hinn’s televangelist organization is registered as a church, so it doesn’t report any financial information to the IRS.

The investigation ended in 2011 with no definitive findings. Hinn’s ministry, unlike some of the others, cooperated with investigators and was praised for it. Grassley’s office said the investigation was successful, despite its lack of findings, because Hinn was “instituting reforms without waiting for the committee to complete its review.” According to the senator’s official statement, “Self-reform can be faster and more effective than government regulation.”

It is not clear whether there was any self-reform, though. Hinn’s ministry is not accountable to any outside group.

Hinn’s ministry came under investigation again in 2017. The IRS raided the televangelist’s headquarters in Grapevine, Texas. The agents had a search warrant saying there was probable cause to believe they would find evidence of tax evasion and “general fraud against the government” in the ministry’s offices.

A spokesman for the IRS told CT that the agency cannot legally confirm or deny whether that investigation is ongoing.

Neither Hinn nor his spokesman could be reached for comment on Friday.

Hinn’s nephew, Costi Hinn, who has been very critical of his uncle and of the prosperity gospel, said the big, splashy “renunciation” does fit a pattern.

“Over the years, he has consistently conceded to enough of a report or an accusation to gain enough trust—as if he’s admitting to it—to gain control over the narrative. He always wants to control the narrative,” Costi Hinn said.

It’s also not clear how thorough this renunciation is. Online at Benny Hinn Ministries, a recent article says if you praise God, you will be blessed with material rewards. “As you faithfully continue to praise God, increased blessings will start to appear in your life,” it says. “Eventually, you will no longer struggle to make the house payments nor worry about getting your lights shut off.”

Hinn also critiqued the prosperity gospel in 2018, saying it had gone too far. He later explained that he wasn’t renouncing the teaching; he only felt it needed to be clarified.

On the Monday broadcast, after saying he was correcting his theology, Hinn seemed to reiterate the substance of the prosperity gospel.

“I still believe in prosperity,” Hinn said. “The message of prosperity is in the Bible. We cannot deny that if we give, we will receive. That’s in the Bible. You can’t erase it. No way. God wants to bless his people way more than you want to receive that blessing. But you can’t put a price on it.”

Costi Hinn is hopeful, nonetheless, that the “correction” is the start of a real change for the televangelist. If the transformation is real, he said he would throw his uncle a parade. But it’s difficult to take Benny Hinn at face value. Watching the recording of Monday’s statement, Costi couldn’t help but see a performance.

“It’s very sensational,” he told CT. “When we are repenting, we’re humble. We’re very low. We’re not being sensational when we repent. We’re being broken. We’re being contrite. There was a lot of showmanship in the statement.”

Costi Hinn said one thing he would hope to see is some measure of accountability. A board of outside overseers would go far, he said, towards ensuring this change is real.

Rusty Leonard, the founder of Ministry Watch, an independent evangelical group that advocates for financial accountability and transparency, agrees.

Lack of accountability is one of the standard critiques of the prosperity gospel, especially from classical Pentecostals like the Assemblies of God. The denomination teaches that God does miracles today; people can be healed by faith; and it is important for Christians to pray for divine intervention. But it rejects what it sees as the facile formula of prosperity teaching.

“You’ve got to have a modicum of accountability,” said Self at AGTS. “It’s not that people have to be denominational. But when they’re on their own and they’re not correctable, that’s a deep concern.”

In his broadcast, Hinn mentioned discussing his theological change with Steve Strang, the founder and CEO of Charisma Magazine. He also reported on a recent conversation with Pat Robertson, the founder of the Christian Broadcasting Network, and talked about praying with him. Hinn did not indicate that anyone would be overseeing any changes he might make to his ministry, though.

Leonard said he didn’t think it was likely to happen.

“I’m not cautiously optimistic,” he told CT. “That’s too strong. I’m whatever the opposite of that is—maybe I’m hopefully pessimistic.”