During Israel trips, many Christian pilgrims repeat the rite.
Kate Shellnutt
September 24, 2019 8:00 AM 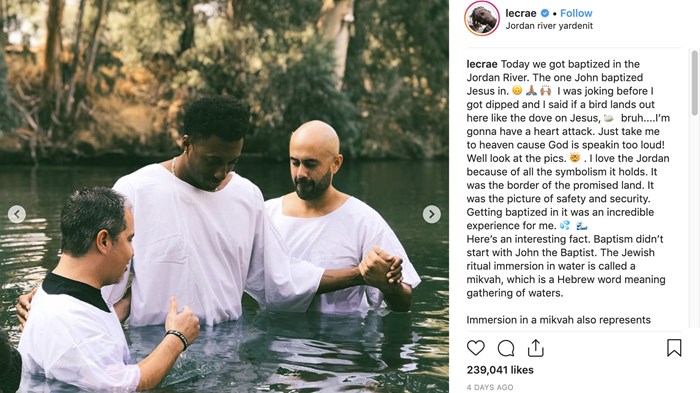 Like thousands of Christians who visit the Holy Land, Lecrae donned a white robe to be baptized in the Jordan River last week. The popular Christian rapper posted a video showing him being immersed in the waters where Jesus was said to be baptized. As he came up out of the water, Lecrae let out a loud “whoo!”

Fans on social media mostly celebrated his experiences at Israel’s pilgrimage sites, but some questioned why Lecrae—an outspoken believer who has been making Christian music for over 15 years—would opt to participate in baptism if he had already been baptized. Lecrae wrote in his memoir that his grandmother had him baptized as a kid, and he came to faith on his own in college around 20 years ago.

The Grammy winner responded to one follower who suggested that since Lecrae already has new life in Christ, the Jordan baptism was just a “weird bath in a very significant place.”

Protestant Christians make up half of the 2.6 million religious tourists who come to Israel each year, and many wish to commemorate the sense of spiritual revival that comes from seeing scriptural sites in person.

It is not uncommon for those who have already been baptized to want to do it again in the Jordan River, even if they hold to a theological position that only one baptism is necessary in the life of a Christian.

“When these Christians tour the land of Israel, they are being exposed to the historical reality of the biblical Scriptures. That’s a powerful experience. As Lecrae himself said, ‘More truth comes alive,’” said Jesse Rojo, Hispanic outreach coordinator for the Philos Projects, which organizes Christian trips to Israel.

“One is not impacted, in the same spiritual sense, as when one is baptized for the first time. But we understand if, for symbolic reasons, someone would want to baptize themselves a second time in the place believed to be the site of Jesus’ baptism.”

Lecrae and more than dozen fellow Christian hip hop artists, including Tedashii, Derek Minor, and Propaganda, made their recent trip through Israel Collective, an initiative of the largest Christian Zionist organization in the world, John Hagee’s Christians United for Israel.

Israel Collective’s director, pastor Sammy Lopez, officiated baptisms for Lecrae and the others. Before each, he said, “Because of your confession of Jesus Christ as your Lord and Savior, it is my pleasure my brother to baptize you in the name of the Father, the Son, and the Holy Spirit.”

This group of popular performers follows many other influential Christians who have gone under Jordan’s waters. Oral Roberts University president Billy Wilson told CT he and his father baptized each other in the Jordan during a visit for his father’s 75th birthday.

San Antonio pastor Max Lucado has also been re-baptized in the Jordan and organized trips to Israel for fellow believers to do the same. With a crowd at the river in 2017, he said, “Some of them are being baptized for the first time. Many of them are rededicating their faith. We believe baptism is a tender moment, and what better or more appropriate place than to be baptized right here in the Jordan River?”

More generally, whether or not Christians favor a second baptism for believers depends on their theological view. Paedobaptists tend to believe that baptism serves a sign of covenant membership and being re-baptized is unnecessary, even after personal conversion; credobaptists, favoring “believers’ baptism,” hold that baptism is only meaningful once you are a professed Christian.

Critics also accused Lecrae of using his recent baptism as a promotional tool. Prior to the trip, he wrote, “I’m bout to go to Israel next week...I’m gonna learn a bunch of mind blowing things about God and myself...then bleed it out on a couple songs. Then my album will be ready.” Then, he tweeted last Thursday, “Can’t be baptized in the Jordan river and make the same old music. This new album is gonna be special.”

Several US celebrities have publicized being dunked in Jordon River as a marker of spiritual transformation, including Mario Lopez, two of the Backstreet Boys, and NFL stars like Deshaun Watson and Odell Beckham Jr.

Besides being the site of Jesus’ baptism, the River Jordan takes on additional symbolic heft as the waters the Israelites crossed to enter their Promised Land. The Jordan comes up in African American spirituals like “Roll, Jordan, Roll,” “I’m Going Down to the River of Jordan,” and “Deep River.”

Lecrae himself released a song with Bryean Isaac in 2017 called “River of Jordan.” It opens with the lines, “They say wash in the river of Jordan / Wipe away your sins like I’ve done mine.”

After his baptism, he told his Instagram followers, “I love the Jordan because of all the symbolism it holds. It was the border of the promised land. It was the picture of safety and security. Getting baptized in it was an incredible experience for me.”

Lecrae and the Israel Collective group visited Jordan River Yardenit, a site along the river that was established for baptisms by the Israel’s tourism board in the 1980s. It now claims more than half a million visitors a year.

The historical location on the western bank of the river, Qasr al-Yahud, had to be closed due to landmines following the Six-Day War. It partially reopened in 2011, and CT reported last year on new efforts to continue de-mining the area so more pilgrims could return.

The magazine has also covered the ecological concerns around the Jordan River itself, as its shores have become polluted and its levels at historic lows as water gets diverted for human use.