The Texas Republican believes addressing the root causes of violence—like a disregard for life—will do more than gun control.
David Roach
September 03, 2019 10:00 AM 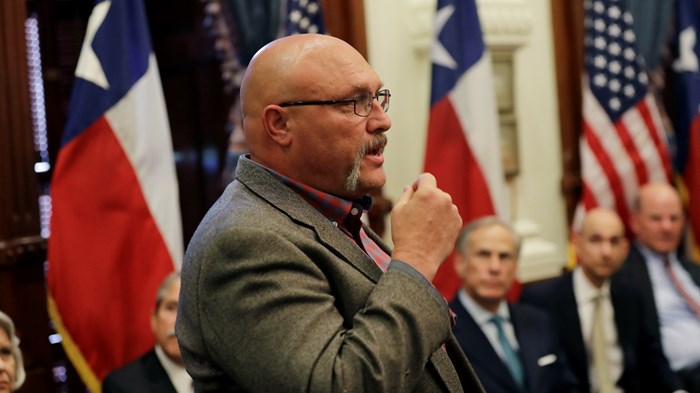 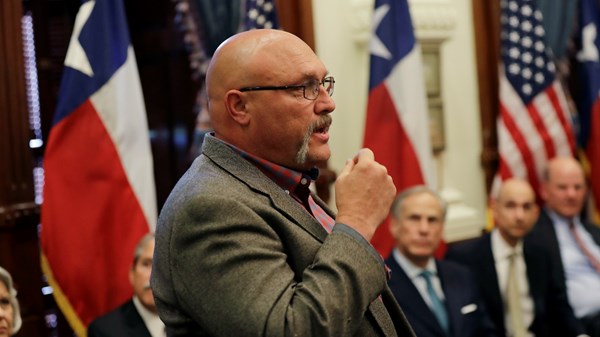 After Pastor Frank Pomeroy’s congregation in Sutherland Springs, Texas, suffered the deadliest church shooting in US history two years ago, he considered running for public office to “bring sense back” into a political arena that seemed to prize partisan talking points over caring for hurting victims. But it wasn’t “the Lord’s timing,” so Pomeroy relegated the idea to the back of his mind.

He was stirred again, however, when a gunman killed 22 people at an El Paso, Texas, Walmart last month and another slew nine at a Dayton, Ohio, bar the same weekend. To Pomeroy, politicians once more seemed to prioritize “hot-button election points” over “laying a foundation of healing and of grace.”

“My heart was broken” for the victims, Pomeroy told Christianity Today in an interview.

Within a month, he had entered the 2020 race for a state senate seat in Texas’ 21st district. His top campaign issue stems from his concern for mass shootings but does not center on gun restrictions. Instead, he hopes to address what he sees as the character deficiencies and low regard for human life that spawn violence.

Even in the week since Pomeroy announced his plans to enter the race, another mass shooting has taken place in the Lone Star State.

Inspired by conversations with friends and reading the biblical prophet Ezekiel’s divine call in Ezekiel 2, Pomeroy, a Republican, feels running is a matter of “obedience” for him “win, lose, or draw.”

“I think God was molding me” to be “what he called me to be in the midst of our tragedy,” he said. “He’s been molding me even through the tragedy possibly to come and stand in this position” as a state senate candidate.

Despite his conviction, the campaign looks to be an uphill battle. Democratic incumbent Judith Zaffirini has held the seat the past 32 years. She is the first Hispanic woman elected to the Texas Senate, the second most senior member of that body, and a member of the Texas Women’s Hall of Fame. President Trump lost the district to Democrat Hillary Clinton by double digits in the 2016 presidential election, according to the Associated Press.

Pomeroy and his wife Sherri were out of town when a gunman bust into worship at First Baptist Church of Sutherland Springs November 5, 2017, killing 26 people—including the Pomeroys’ 14-year-old daughter—and injuring some 20 others. The dead and wounded included most worshipers in attendance. The deceased ranged from a baby in its mother’s womb to a 77-year-old.

Pomeroy’s oldest son told him, “Some people think you’re broke inside” because of the shooting. But both Pomeroy and his son see it as being “remade.”

Before the shooting, “things that were not important, I made important,” Pomeroy said. “After our shooting, I saw firsthand the value of every individual life and what was taken for granted. Now, people to me by far are more important.”

Recently, he had to be reminded to mow his lawn, Pomeroy said, because his “mind just isn’t focusing on trivial things” as he attempts to provide pastoral care for the surviving members of his growing congregation.

Along with his change in perspective, Pomeroy has experienced a change in his platform for ministry since the shooting. His own church, located outside San Antonio, has quadrupled in size since the shooting. And he has moved into the national spotlight, giving media interviews, speaking at conferences, and meeting with politicians like Vice President Mike Pence and Texas Governor Greg Abbott.

As Pomeroy looks to leverage that platform for his campaign, one of his top messages will be: “We continue to throw around blaming inanimate objects” after shootings—guns—“when in reality these shootings all across America are a character issue” and “a moral issue.”

A Second Amendment advocate, Pomeroy “can’t think of any” specific gun control measures on the table he would support, but he is open to dialoging with fellow legislators about workable policies, he said, including ways to keep firearms away from people suffering with mental illness.

He also wants to help teenagers and young adults feel included and loved to decrease their likelihood of lashing out with acts of violence.

He has yet to offer specific policy details and said his campaign is “working on our platform.”

Mass shootings are not attributable chiefly to firearms, he said the same day a gunman killed seven people in an Odessa, Texas, shooting rampage. He believes that denying “the sanctity of life” for unborn children has led people also to disregard “the sanctity of life at an older age.”

Nearly 9 in 10 (89%) of both white evangelicals and Americans overall endorse mental illness restrictions, though evangelicals are less likely to support other proposals, such as a federal guns sales database (61% of white evangelicals compared to 71% of Americans), a ban on assault-style weapons (63% to 68%), or a ban on high-capacity magazines (53% to 63%), according to 2017 Pew Research Center data.

Pomeroy hopes appealing to values will help him unseat Zaffirini despite her unopposed reelection in 2016 and her landslide win in 2012 with more than two-thirds of the vote. The 21st district stretches from Austin in the north to the Mexican border in the south and juts out to the east near Corpus Christi. The district’s residents are 72 percent Hispanic, according to US census data.

Pomeroy’s campaign will include outreach to Hispanic voters, he said, noting the 200 regular worshipers at his church comprise approximately equal numbers of Hispanics and Anglos. “This state was built with families of strong values ... Color doesn’t get in the way of that.”

A winning coalition of supporters, Pomeroy said, must include Republicans in the district’s northern regions and Hispanic Catholics in the south who are “very religious” and lean toward Democrats historically but believe the Democratic Party’s vision “is counterintuitive to their values.”

In contrast to Pomeroy’s pro-life stance, Zaffirini received a 17 percent rating on Texas Right to Life’s most recent pro-life legislative scorecard. She identifies as pro-life and has supported some legislation such as a 2017 dismemberment abortion ban.

Zaffirini told AP Pomeroy is “a man of integrity” and said she is surprised a pastor would make negative public comments about political opponents. She added, “I always treat every challenger seriously and every challenger respectfully and that is how I hope to engage with him.”

The potentially challenging campaign doesn’t deter Pomeroy, who wonders if part of God’s plan for the tragedy at First Baptist Sutherland Springs was to prepare him for public service. He referenced fellow pastors who have gone on to lead in the public square, quoting as further inspiration the end of Romans 8:31, “If God is for us, who can be against us?”

His election would fall the same week as the three-year anniversary of the Sutherland Springs shooting.