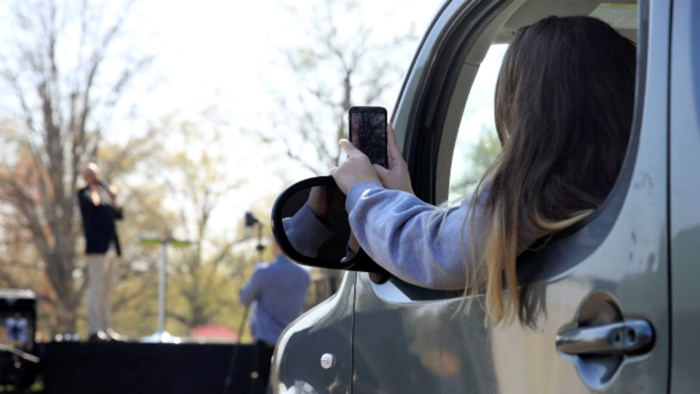 Pastor David Dale had to call the sheriff to get a clear explanation of how the new rules restricting public gatherings would affect his church. The Methodist congregation had transitioned from its building to a drive-in theater, but now there was a question whether that was okay.

“This new order prohibits any activity at movie theaters,” Dale said as he hung up the phone. “I think that shuts down the drive-in.”

The Centre, Alabama, congregation is among scores across the country that moved to parking lots and drive-ins to comply with restrictions put in place to slow the spread of coronavirus.

From Michigan to Texas, Wisconsin to California, and New Jersey to North Carolina, Christians have revived this 1950s fad as a way to gather without getting physically close enough to infect each other. They stay in their own cars, honk their amens, and listen to sermons on the radios.

But as more states moved to safer-at-home and stay-at-home orders, the revival of drive-in churches raised questions. Emergency orders vary by state and even by county. They sometimes change overnight, as local leaders work with public health experts to determine what constitutes a “public gathering” and what kinds of activities should be exempt. Several states have had political fights over whether or not religious gatherings should be defined as essential.

And even when the guidelines are set, elected officials, public health officials, law enforcement officers, and pastors don’t always agree on how to interpret them. Drive-in churches have become a kind of public hermeneutic problem, negotiated in the lead-up to Easter.

Days before the holiday, the owner of a Kentucky drive-in theater that planned to host seven churches for worship on Easter Sunday still didn’t know whether they would be allowed to gather.

“We’re hopeful that it’ll get to happen but at the same time we are not in any way going to be defiant against government regulations,” the drive-in owner told the local ABC news affiliate. “Our lot by design could hold up to 450 cars so we’re restricting each service to no more than 200 cars, so that allows plenty of room to space out. At least six feet apart, probably a little more.”

In Oklahoma, a nondenominational church got approval from the Tulsa Health Department to hold a service at a local drive-in. Pastor Tom Dillingham was going to preach from the back of a flatbed truck, a small transistor broadcasting the sermon to car radios. Then the mayor announced new rules, which the police department said would not allow the service.

In Georgia, the governor’s office gave its okay to drive-in worship. A spokesperson said the governor “has encouraged religious institutions to move to online services and to strictly adhere to social distancing, but no state level mandate would preclude those organizations from holding a ‘drive-in’ church.” But a Georgia Department of Public Health official had a different message for drive-in churches: Stop.

In Texas, a judge in one county “strongly encouraged” drive-in churches. In another, a judge said they were not allowed at all.

There are some churches defying the stay-at-home orders, and invoking religious liberty arguments to do it. The new drive-in churches, however, seem to be trying to comply, but unsure whether they are meeting the latest guidelines or not.

In Nebraska, the governor and public health department officially approved drive-in services, but then circled back with some restrictions. Windows had to remain rolled up. No palm fronds could be passed out for Palm Sunday; no Communion for Easter.

“Some people … don’t want to go months and months and not have that supper,” said Bryan Drebes, a Lutheran minister in Omaha. “Last Sunday, people were really emotional.”

In Alabama, the official newspaper of the state’s Southern Baptist churches said it received countless requests for guidance on the proper interpretation of the governor’s order. Last week, The Alabama Baptist reported it had discovered “there is no absolute yes or no.” Pastors were advised to check with their county sheriff.

David Dale felt like God prompted him to do a drive-in service. He told his local paper he was sitting on his couch when he thought about the owner of the local drive-in theater.

“The Lord told me to get up and go over and ask him if we could do it,” Dale said. “He said, ‘Yes, let’s do it and see what happens.’ He wouldn’t let us pay him anything.”

The first service was a success, with about 80–100 people, even though it had only been announced the day before. There was a small band—a keyboard and guitar—and a sermon short enough that no one would have to use the bathroom.

When the governor’s office issued updated guidelines around public gatherings, he called the sheriff to see what was allowed. The decision came as a disappointment, but he still sees God at work.

“There’s a Scripture, ‘A man makes his plans, but the purpose of the Lord prevails.’ We live deep in plans and not in purpose,” Dale said. “Find out what is stable, what is constant, what lasts, connect and live your life based on that. I believe there is a God who created everything we see, and he loves us. Life is about knowing that.”