The oldest Arabic-speaking Protestant church in the Middle East has survived worse crises than the recent Lebanon explosion.
Jayson Casper in Beirut|August 20, 2020 08:35 AM 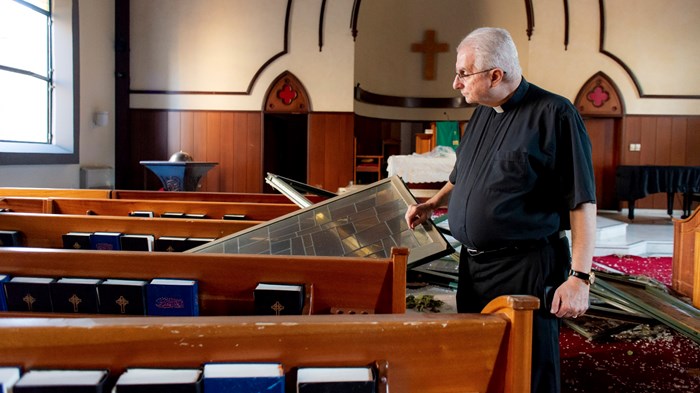 Image: P. Clarkson
The pastor of National Evangelical Church surveys the damage from the Beirut explosion.

Sitting at his desk in the second-floor office adjacent to the historic National Evangelical Church of Beirut, Habib Badr calmly filled out the wedding registry. It was a ritual the almost 70-year-old had performed countless times over the course of his 35-year ministry.

The next day, there would be a funeral. A stalwart member of his congregation, the former head of reconstructive surgery at the American University of Beirut hospital during the years of civil war, had passed away of natural causes.

It seemed there were more funerals than weddings these days, Badr thought. But the nostalgic church would always draw young people ready to exchange their vows, even from the scattered Lebanese diaspora, in imitation of their parents a generation before.

There was something special about the lighting. On a clear day, parishioners could see the distant snow-covered peak of Mt. Sannine, towering over the capital below. Three years ago, the church replaced its eight ordinary windows. Bracketing the sanctuary pews with translucent glass depicting the three crosses of Calvary above colored stones, they aimed to remind worshipers of the ever-present Rock of Ages, upon whom the church is built.

“To the missionaries, we say, ‘Go home,’” a Lebanese Greek Orthodox bishop had publicly proclaimed a generation earlier. “And to the Protestants we say, ‘Come back home.’”

But for Badr and his congregants, they were already home. The National Evangelical Church, the oldest Arabic-speaking Protestant congregation in the Middle East, was formed in 1848. Badr’s grandfather Yusuf was the first native pastor, installed in 1890.

And as if to emphasize, the circular window high above the pulpit—installed in 1998—pictured a cross above Mt. Sannine, with an image of the church in the foothills below. Originally constructed in 1869, the architecture was a blend of Scottish and Lebanese styles.

Every Sunday, the symbolism would resonate: A Reformed church, nestled like any other Lebanese home into the rugged mountainous terrain.

Badr’s wedding thoughts were abruptly shaken by a small tremor. Small earthquakes periodically rattle the small Mediterranean nation two-thirds the size of Connecticut, so the pastor stood and prepared to momentarily take refuge underneath his office doorframe.

It was not a moment too soon. The Beirut explosion, triggered by 2,750 metric tons of ammonium nitrate stored in the port, sent shattered glass spewing across his desk. His sixth-floor apartment suffered similar damage, as did the National Conservatory, which rents the rest of the building.

And in his church, across a now debris-strewn flower garden, seven of the eight windows were blown out, crashing onto the pews below. Badr estimates the total damage throughout the complex as not less than $200,000.

But this salvage operation will be far less costly than the last. 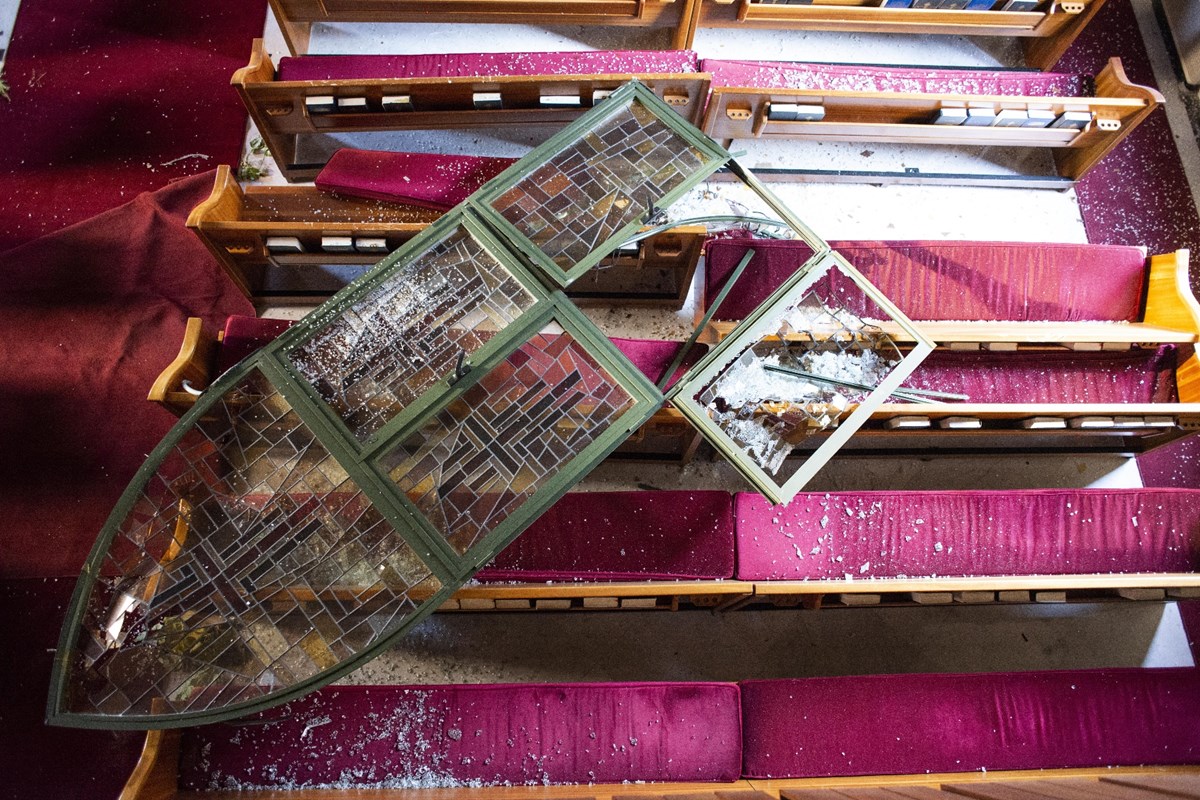 Last year on March 31, the National Evangelical Church celebrated the 150th anniversary of its building. But for roughly two decades, all that remained standing was the church tower.

The civil war turned Beirut into a battlefield. Built right next to the Grand Serail, the headquarters of the prime minister, shells exchanged between opposing Christian, Muslim, and Palestinian militias reduced the historic church to rubble. After being displaced to the relatively safe chapel at the Near East School of Theology in the Hamra district of Beirut, it took two years after the 1990 Ta’ef Accord brought peace between the various factions before the congregation could even contemplate a rebuild.

With the church completed in 1998 in almost the exact same style, at a cost of $2.8 million, Badr installed the circular window as a symbol of hope. But he also faced a rapidly declining membership. At the start of the civil war, the National Evangelical Church and its eight affiliated Lebanese congregations boasted 900 families. After the 15-year conflict, they were reduced to 300.

Post-war reconstruction took off in 1993, restoring some of the original glory of Beirut. But it also transformed the local area, replacing many of the residential quarters with high-rise apartments and glitzy commercial districts. Christian families moved out to the suburbs, where other evangelical churches were close by.

Today there are 250 member families on the books. But many of these are in name only, having long effectively relocated to the diaspora. Weekly attendance averages 150 people, though it can swell to 500 on the Christmas and Easter holidays.

It is a far cry from the heyday of Protestant missions. Though its early years saw even fewer. In 1823, Presbyterian and Congregationalist missionaries settled outside the city walls of the small seaside town of Beirut on the then-Syrian coastline. Prevented by the Ottoman Empire from taking residence in Jerusalem, the American Mission Compound adopted a strategy to engage the existing churches and spark a reformation from within. The Levant already numbered 17 religious sects. Why create another?

The Maronite patriarch received them kindly, but did not support their efforts. 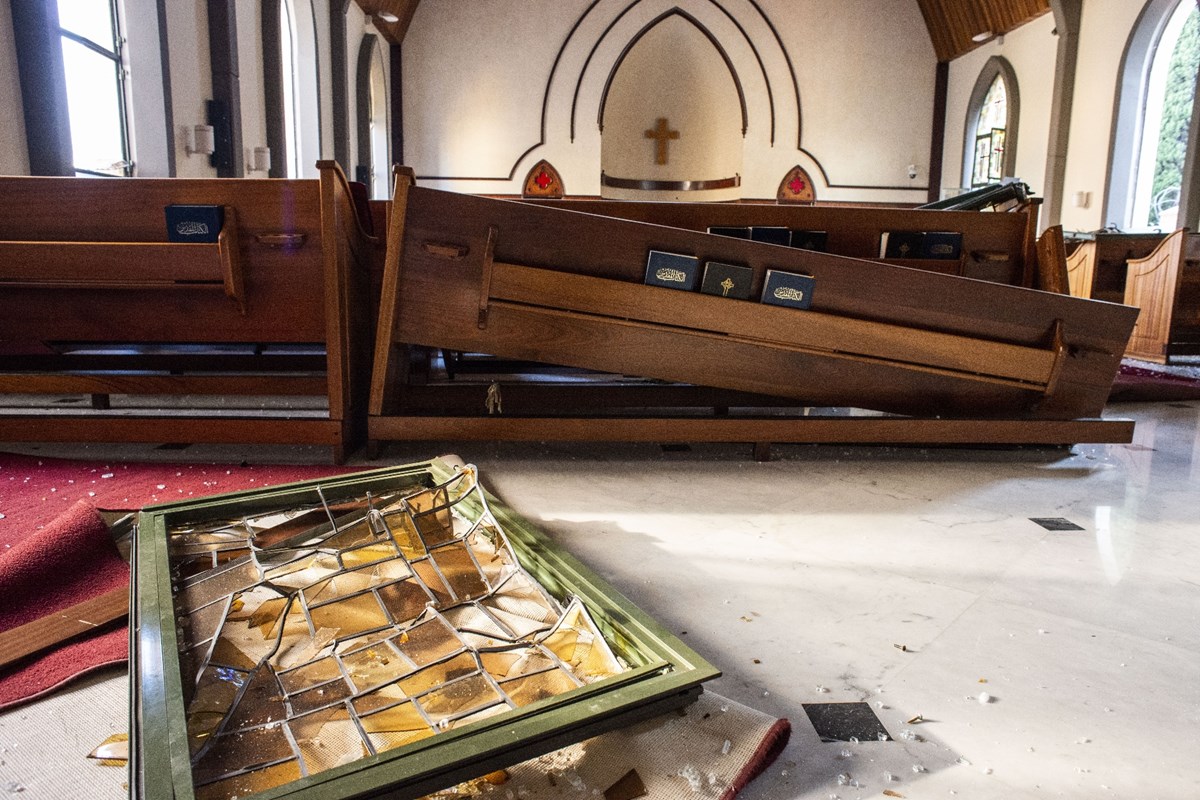 By 1834, when they brought an Arabic printing press from Malta to Beirut to spur literature distribution, the mission had won only eight converts to Protestantism. “Bible ladies” crossed the valleys on donkeys, and a seminary was formed in the mountain village of Abey. The missionaries contented themselves with faithful preaching of the doctrines of grace and let God determine the ecclesial outcome.

That is, until an 1844 visit from mission headquarters in Boston pushed the missionaries to form their own churches across what was then known as the Near East. In 1846, the first Middle East Protestant church was born, of Armenians living among the Turks of Istanbul. The Arab work proved slower; but two years later, the National Evangelical Church in Beirut was formed of 10 communicant members.

But during this time, the population of Beirut began to swell with migrants fleeing the 1840–45 civil war between the Maronite Catholics and Druze Muslims who dwelled in the Lebanese mountains. And in troubled times, a growing missionary community started to see results.

In 1850, the Ottoman sultan issued a decree designating the Protestants as an official millet [religious community], and six years later it was applied in Syria, creating the region’s 18th sect. Churches were formed in the villages of Hasbeya in 1851, and in Abey a year later. Sidon, Tripoli, Zahle, and other locations followed soon thereafter.

But following the American Civil War, the earlier cooperation among missionaries faltered. Presbyterians formed their own agency, and many mission stations were organized into presbyteries. But the proud original Beirut church held to its Congregationalist origins, while keeping fellowship with the emerging synod.

Regardless of stripe, the missionaries continued preaching the gospel, aided by ongoing Arabic translation work of the Bible, completed in 1864. But it was the 1866 founding of the Syrian Protestant College—later to become the American University of Beirut—that boosted the fortunes of the National Evangelical Church. The city grew further, drawing the elite into missionary circles and creating an upper-class church of influence in society.

And on March 27, 1869, they consecrated the new building with an Arabic Bible and a list of members laid in the cornerstone. In time, other Protestant denominations arrived; in 1873, the Quakers formed a high school; in 1895, the Baptists formed a church. But when the Ottoman era ended with the defeat of Turkey in World War I, during the ensuing French protectorate it was the National Evangelical Church that provided leadership.

The secular French failed to recognize Protestantism in their 1936 list of official sects, so pastor Mufid Abdel Karim went to complain. Told to organize like the Protestants of France and form a federation, the National Evangelical Church joined with Presbyterians, Armenians, the Church of God, and the other denominations the following year to form the Supreme Council of the Evangelical Community in Syria and Lebanon. Abdel Karim became its first president. Subsequent pastors held the position through the early years of Lebanon’s independence, until 1964.

Today the church provides care for 35 elderly in an assisted living residence. It also oversees the Schneller orphanage in Lebanon’s Bekaa Valley, originally founded by German missionaries in Jerusalem.

And while many of its affiliated churches were scattered during the civil war, plans are underway to form a technical school in one of the ruined properties. Education is provided for grades K–12 in the nearby town of Kafrshima; however, due to the ongoing economic crisis in Lebanon, the church had to suspend its elementary school in Beirut.

To save the body, the leg must be amputated, Badr said.

But the National Evangelical Church was rocked even earlier, as protesters against the sectarian national leadership filled Martyrs Square in October 2019 and onward, pushing up against the Grand Serail. Violent elements continually clashing with police caused Badr and his family several sleepless nights, and eventually barriers and barbed wire were laid across the road. It is now impossible to get to the church without passing through an army checkpoint that verifies appointments. Sunday worship is permitted, with precautions.

At least it was before COVID-19. In 2018, Badr began livestreaming his service on YouTube, which made for an easier transition. Paradoxically, the crises have brought his congregation closer together, he said. Providing emergency aid and counseling services reminded them about the nature of the church, even as they are absent from it.

Amid all the crises, Badr reflected on the landmark status of his historic building, honored by the government with a postage stamp on its 150th anniversary. Issued in commemoration for Reformation Sunday, this heritage helped rejuvenate the Bible in the life of Lebanese Christianity.