(UPDATED) Board leaders decide return of Christian university’s president wouldn’t be in its “best interest” after dueling accounts of an affair make news.
Kate Shellnutt|August 25, 2020 01:00 PM 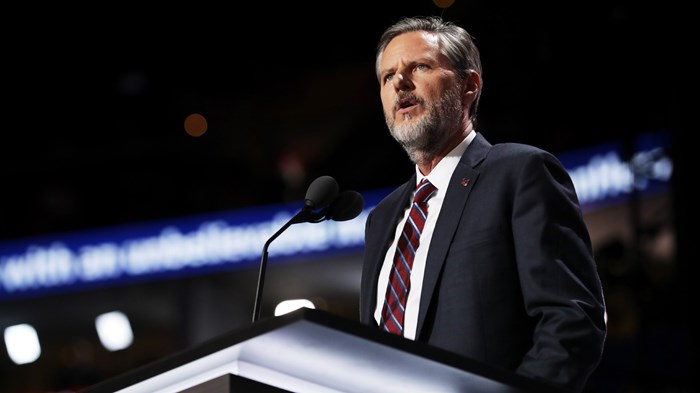 Update (October 29): Two months after leaving Liberty University, Jerry Falwell Jr. is s uing the school for defamation. The former university president alleges Liberty officials accepted “false claims” against him to force his resignation and then “engaged in a campaign to ‘tarnish, minimize, and outright destroy the legacy of the Falwell family and Mr. Falwell's reputation.’” Falwell had reportedly been granted a $10.5 million severage package under his contract.

Monday was a big day for Liberty University. The school began the first day of classes as President Jerry Falwell Jr.’s name trended on Twitter due to recent news reports about the involvement of a young man in the conservative Christian leader’s marriage.

By the end of the day, Falwell had agreed to resign, rescinded his resignation, and submitted it again. The board of trustees officially accepted Falwell’s resignation on Tuesday.

Falwell had been put on leave two and a half weeks ago after sharing a provocative vacation photo on Instagram. The additional reports made it clear that it would not be in Liberty’s “best interest” for him to return, the Christian college said Monday night in a statement.

After leading the school through historic growth since 2007, Falwell ultimately agreed to leave because he wants “what’s best for the school,” he told the Wall Street Journal. The evangelical university confirmed in a statement that its “heartfelt prayers are with him and his family as he steps away from his life’s work.”

“I call upon the University community and supporters to be in prayer for the University and for all its leadership, past, present and future, as we walk with the Lord through this stormy time of transition,” said acting president Jerry Prevo, an Alaska pastor who had served as board chair before he stepped in to lead while Falwell was on leave.

Falwell said in a statement to the Washington Examiner Sunday night that his wife, Becki, had an affair with a pool boy-turned-business partner, alleging that he and his wife were now being extorted. In a Reuters investigation published Monday morning, the 29-year-old Florida man, Giancarlo Granda, said he had been in a relationship with the Falwells, with Jerry’s knowledge, from 2012 to 2018. Falwell said in his statement, prior to Reuters airing Granda’s claims, that he was not involved and called Granda’s account “90 percent false.”

Questions around Falwell’s ties to Granda and Falwell’s investment in a Miami hostel previously came up in investigations in Politico and the Miami Herald.

Critics also expressed frustration about the racial climate on campus, brought to the forefront by a divisive tweet in May that led several African Americans to cut ties with Liberty and dozens of African American alumni to call for his resignation.

For the past few years, concerned members of the Liberty community say they worried that nothing would be done. They assumed because of Falwell’s influence at Liberty, and the loyalty of a board made up of Jerry Falwell Sr.’s associates and Falwell Jr.’s own appointees, he may never be held into account.

But then a viral photo turned up—not from media investigations, but Falwell’s own Instagram account. He is posed next to a woman and both have their zippers down. After backlash, Falwell agreed to take an indefinite leave of absence, which he recently characterized as a sabbatical, though it came at the board’s request.

Some critics of Falwell told CT at the time they were shocked to see the school take action.

The move also had trustees considering whether Falwell should stay in his position, even before hearing the news about the Falwells’ alleged sexual tryst.

The concerns could no longer be dismissed as baseless attacks from the outside, said Suzanna Krivulskaya, a professor at California State University San Marcos who writes about the history of American evangelical sex scandals.

She likened Falwell’s narrative to the pattern of institutional denial, then temporary leave, then permanent oustings Christians have seen modeled around leaders such as Jim Bakker, Ted Haggard, and Billy James Hargis. Krivulskaya observed that cases involving “accusations of homosexuality and allegations of bisexuality—where there’s another man involved” often prompt a quicker response and swifter condemnation.

Falwell Sr., Falwell’s father and Liberty’s founder, knew how sexual misdeeds could hurt ministry relationships and impede the work of evangelism. He famously took over for televangelist Jim Bakker after an “alleged sexual indiscretion” and coverup at the PTL Club in the 1980s.

Among evangelicals, sexual scandals hit on several levels. There’s the hypocrisy of a leader espousing sex between one man and one woman while not obeying the teaching himself. But there’s also the grief of how sexual brokenness damages people, families, and ministries.

“The past 24 hours of news related to Liberty University and Jerry Falwell Jr. and his family is sad. Whatever portion of it is true, it is a reminder of just how deeply entangling sin can become and our deep need for genuine spiritual renewal from Christ each and every day,” said Virginia pastor and Liberty alumnus Colby Garman, who signed a petition the week prior calling for Falwell’s removal.

“As I have said before, it will be best for the school to make a permanent leadership change immediately and allow the Falwell family to work out these matters in private. Prayers for all involved.”

The impact of Falwell’s departure will extend beyond the school. Falwell is a big name in evangelicalism because of his father’s legacy and the success of Liberty, which has grown to an enrollment of more than 120,000 students. Lately, he has also become known as a close friend of President Donald Trump. He serves as a faith adviser to Trump and has hosted the president on campus.

David Dockery, president of the International Alliance for Christian Education, said, “The news will certainly have implications for all who serve in Christian higher education as well as for evangelicalism at-large, at least from the vantage point of perceptions among those looking on from the outside.”

Liberty is somewhat of an exceptional example in the Christian college landscape. It is not a member of the Council for Christian Colleges and Universities (CCCU), though fellow evangelical schools, looped in with Liberty and its leader in media accounts, “are surely embarrassed by Falwell,” Bill Ringenberg, author of The Christian College: A History of Protestant Higher Education in America, told CT.

Even at the helm of what was once the country’s largest Christian college, Falwell never claimed to be the spiritual leader in his family—that’s his brother Jonathan Falwell, who succeeded their father as pastor of his other institutional legacy, Thomas Road Baptist Church. Instead, Falwell had positioned himself as steering Liberty like a business.

Many attribute that strategy as leading to Liberty’s massive growth in online education, sports, and enrollment.

“Jerry has done a great job in building a tremendous school,” Robert Jeffress, fellow Trump supporter and pastor of First Baptist Dallas, told the Washington Post. “The allegations, if true, should be a warning of the destructive power of sin.”

But his leadership has also tainted the school’s Christian witness, critics say.

Quan McLaurin, who resigned as a diversity director at Liberty, fears the board has only acted to hold its leader accountable when the negative press stands to affect its bottom line. He criticized leaders for not acting sooner or in response to the racial matters that have come up on campus. He called Falwell’s resignation “a great step in the right direction, but not enough” and wants to see “true accountability” and ethical behavior from the top.

“With the amazing resources with which they have been blessed,” he said, “we hope that the Board will prioritize their calling to rigorous academics and an unapologetic Christian commitment that will allow them to maximize their impact and influence in the world of higher education as well as in their service to church and society.”

Johnnie Moore, who previously served as the school’s vice president of communications during his 13-year tenure at the school, said its mission will continue even without a Falwell at the helm.

“Liberty would not exist but for the Falwells. Yet, the brilliance of its original mission and vision was transcended long ago,” said Moore, founder of the evangelical marketing firm The Kairos Company. “Liberty is an institution designed to thrive for the cause of Christ today and for generations. I am sure members of the community—past and present—will pray and will work together to ensure that Liberty's best days are ahead."