President of Armenian evangelical churches in Europe tells CT the Turkish and Azerbaijani diasporas are threatening their neighborhoods, as he struggles to maintain Christian love.
Jayson Casper and Jean-Paul Rempp|December 8, 2020 01:35 AM
Français 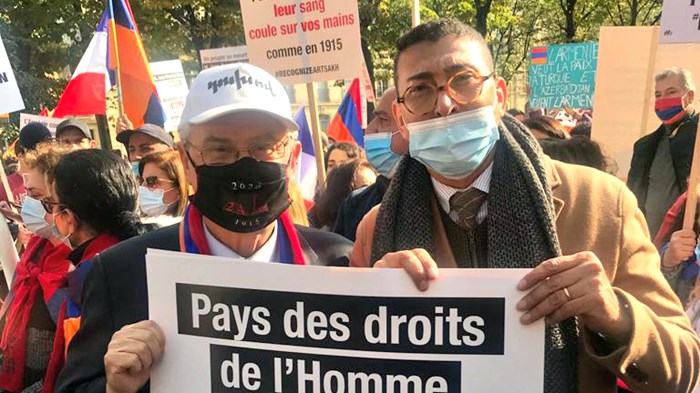 Image: Courtesy of Gilbert Léonian
French Armenians and their supporters protest in Paris.

Throughout the six-week war in Nagorno-Karabakh, the Armenian diaspora rallied in support of an ancient Caucasus mountain homeland they call Artsakh.

Overall, they donated $150 million in economic and humanitarian aid.

In California, they blocked freeway traffic to protest the lack of news coverage.

In Lebanon, they hung banners against Azerbaijani and Turkish aggression.

And in France, they successfully lobbied the senate for a non-binding resolution recognizing Artsakh’s independence. (International law recognizes Nagorno-Karabakh as Azerbaijani territory.)

The symbolic vote angered Azerbaijan, which called for France’s removal from the Minsk Group, co-chaired with Russia and the United States and tasked with overseeing negotiations with Armenia since 1994. Turkey has petitioned for a leading role.

But the consequences go beyond regional politics. The controversy could threaten the French social peace, already riled amid President Emmanuel Macron’s campaign against Muslim “separatism.”

Azerbaijan, and especially allied Turkey, also have an extensive diaspora throughout Europe. And last month, their supporters led demonstrations in Armenian neighborhoods in Lyon, vandalizing the Armenian genocide memorial.

France then banned one of the more violent groups, the Grey Wolves.

To gauge the situation, CT interviewed Gilbert Léonian, a Paris-based pastor and president of the Federation of Armenian Evangelical Churches in Europe. Of the roughly 500,000 French people of Armenian origin in France, about 3 percent are evangelical, worshiping across nine churches.

(Like many French pastors across all ethnicities, Léonian studied at the well-known evangelical seminary in Vaux sur Seine, near Paris. He recalled reading CT in the 1970s, as he studied under the renowned theologian Henri Blocher.)

Léonian discussed relations between the ethnic communities, his fears for the fate of Nagorno-Karabakh churches, and his personal struggle to love his Azerbaijani and Turkish neighbors: 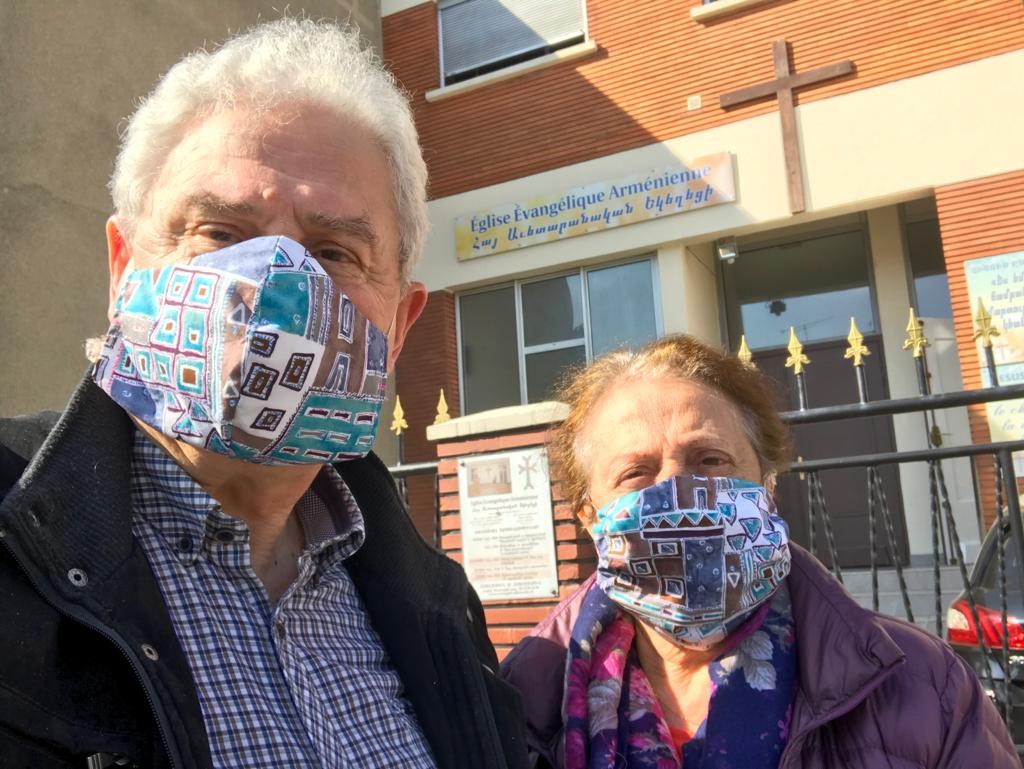 Gilbert Léonian and his wife in front of their church near Paris.

To what degree are the Armenian, Turkish, and Azerbaijani communities integrated into secular French society? Do they maintain their respective faiths?

Others came to France in different migratory waves due to insecurity in their countries of origin: Lebanon, Syria, Turkey, Iran, and more recently, Armenia, following the 1988 earthquake.

Today in France, the Armenian population is mainly established along a south-to-north line from the Mediterranean port city of Marseilles, where the majority of original immigrants arrived and settled, through France’s second largest city of Lyons, and up to Paris.

The Armenian people are deeply religious, and were the first people to accept Christianity as their state religion, in 301 A.D., 12 years before Emperor Constantine’s Edict of Tolerance in 313 A.D. In France, 90 percent belong to the Apostolic [Orthodox] community, in 24 churches. Catholics represent 7 percent, in five churches. Very few Armenians call themselves atheists.

However, we are seeing a major secularization of religious practice, reflecting the general trend in Europe. For many Armenians, the church is more the place where the diaspora maintains its identity and culture, rather than a place where Christian piety is nurtured.

There are about 800,000 Turks and 50,000 Azerbaijanis in France, and overall they try to avoid living close to French people of Armenian origin. We find them in large cities and all over France.

All studies and media cite Armenians as an example of successful integration. The most famous Frenchman of Armenian origin was the singer Charles Aznavour.

Turks and Azeris, on the other hand, live in identity-based and communitarian withdrawal and are very attached to their Muslim religion.

There are 2,500 mosques and Muslim places of worship in France, and 800 imams, 300 of whom are non-French citizens. Half of these are Turkish, and paid as civil servants by Turkey. Additionally, the previous general secretary of the representative council of the Muslim faith in France, was an ethnic Turk.

That gives a fairly accurate idea of the Turkish influence in France.

What is the relationship like between the three ethnic communities?

Inasmuch as successive Turkish governments have not recognized the genocide of 1.5 million Armenians in 1915, this wound has not yet healed. The majority of Armenians retain a deep bitterness and hatred for this injustice.

My own family members fled the massacres in modern-day Turkey via Syria and arrived in Marseilles in 1922, traumatized and having lost everything.

But my parents, my children, and my grandchildren were born in France. Over five generations, we have followed a long path to integration.

I did not deliberately cultivate hatred or revenge in my heart. But deep down, even though I was a born-again Christian and a pastor, I still felt very distant from the Turks and everything Turkish.

And then, one day, that wall fell.

Thanks to the prayer and compassion that God poured into my heart, I set out on a path of dialogue, with the aim of arriving, one day, at a reconciliation based on truth. And God put on my path a Turkish pastor who acknowledged the horror of the genocide and asked forgiveness from the Armenian people, by kneeling before the entire assembly of my church.

This year, with Turkish friends from my region, we had planned to go and visit the village of our grandparents, in Cilicia, to continue this path of inner healing. COVID-19 prevented us from doing so.

But after the horrors committed in recent days by the leaders of Turkey and Azerbaijan in Nagorno-Karabakh, the pain of genocide has once again been awakened. I feel that this path of dialogue has again gone far away from me, and for a very long time.

Several groups of Christians nevertheless have a true vision from God to make the gospel of Jesus Christ known to the Turkish people. I can only encourage them and pray for them.

What happened during the ethnic Turkish march in Lyon?

Around 250 Turks belonging to an extremist party marched in the main street of Décines, a suburb of Lyon, chanting very violent anti-Armenian slogans. It was a real manhunt. A few days later, in the middle of the night, they tagged the walls of the Armenian Heritage Museum, as well as the monument in memory of the victims of 1915. This type of hateful demonstration was then repeated in Vienne, a town 20 miles south of Lyons with a significant Armenian population.

After having chased us from our lands 100 years ago, they are now chasing us in our new homeland, the land that welcomed us, France. Armenian public buildings, including churches, schools, and cultural centers have since been placed under police surveillance in French cities where there is a strong Armenian community. 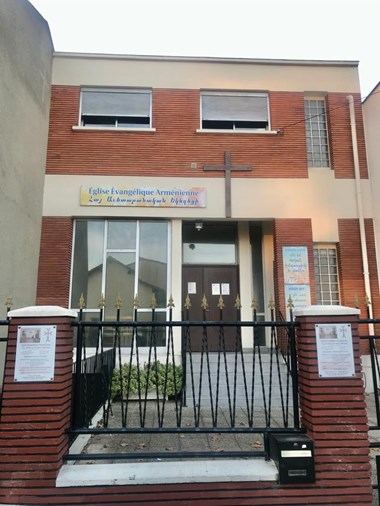 How did the Armenian community respond?

As usual, Armenians reacted peacefully. Everywhere, meetings and protest marches were organized to denounce the massacre of Armenians in Nagorno-Karabakh.

We also alerted President Emmanuel Macron, our politicians, and the media.

In several cities in France, including my suburb of Alfortville, we organized ecumenical prayer vigils for peace—with Armenian Orthodox and evangelical believers, French Catholics, and Lebanese Maronites.

Azerbaijani officials are saying that once they regain sovereignty over Nagorno-Karabakh, they will not harm Armenian citizens. What is your view of the situation?

I remain very pessimistic about the security of the few Armenians who will remain in the free part of Karabakh. How can we trust a head of government who has publicly boasted: “We have finally chased away these Armenian dogs!”

My heart bleeds when I see that Armenians fleeing the area occupied by the Azeris are burning the houses they built with their own hands, so that they won’t fall into the hands of the Azeri conquerors.

Let us make no mistake: The recent tragic events in France—in Conflans-Saint Honorine, where a history teacher’s throat was slit in front of his school after a course on freedom of expression, and in Nice, where three Catholic faithful were also slit while praying in the city’s cathedral—are the result of the same fanatical ideology at work in the carnage suffered by Armenians in Artsakh.

Now that the cease-fire agreement has been signed to the detriment of the Armenians, what are your fears?

First of all, this ignominious defeat and the loss of three-quarters of Nagorno-Karabakh are a real crime against humanity, which will remain a gaping wound in the history of civilized peoples. I am afraid that the Armenian people, who over the centuries have given so many martyrs for the cause of the gospel of Christ, will have difficulty recovering from these barbaric acts in the 21st century.

I am very concerned about the preservation of the 500 churches and religious buildings in Nagorno-Karabakh, once they fall into the hands of the occupier. Nagorno-Karabakh is the cradle of Armenian Christianity.

One of the jewels in great danger is the 12th-century monastery of Saint Thaddeus, a UNESCO World Heritage Site. Thaddeus is one of the two apostles of Jesus who evangelized the Armenian people, according to tradition.

And finally, I’m very concerned about the West. After this savage tragedy, lived in full view of the whole world, who is going to stop religious fanaticism?

What are you praying for?

Prayer topics are many, because the Armenian people are in agony, and they need the solidarity of the whole world. Instead we deplore the guilty silence of the international authorities, while the churches of all denominations have shone by their lack of courage!

By the grace of God, I have been a pastor in the Armenian Evangelical Churches of France for 47 years. But I have never been so shaken in my humanity, and in my Christian faith, as by this barbaric war and by the unjust capitulation.

My prayer is that God will manifest his justice, in his time and by his means.

Interview by Jean-Paul Rempp and translation by Andrew Wiles, with additional reporting by Jayson Casper.