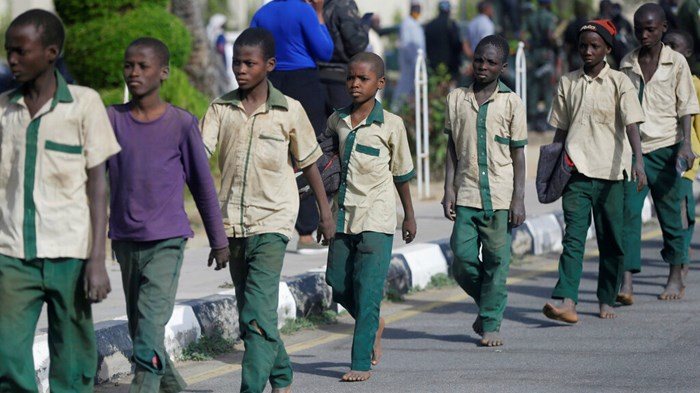 Image: Sunday Alamba / AP
A group of Nigerian schoolboys are escorted December 18 by military and officials in Katsina following their release after they were kidnapped last week.

Bleary, barefoot, apparently numbed by a week of captivity, more than 300 Nigerian schoolboys, freed after being kidnapped in an attack on their school, were welcomed by the governor of Katsina state and Nigeria’s president on Friday.

Reunions with their parents began late in the day.

“Since this incident happened I have not been able to sleep, but now I can sleep,” said Salisu Kankara, a parent of one of the schoolboys who was released.

The relatively quick release of the more than 330 boys took place after a prompt response by the government, which appears to have learned from earlier mass school abductions, especially of the Chibok schoolgirls, that did not have such a happy result.

“There is still the moral burden on the government to get Leah Sharibu and the rest Chibok girls released from captivity,” Supo Ayokunle, president of the Christian Association of Nigeria (CAN), told CT. “We are praying for [our] president for a better future and a more secure nation.”

The students’ nightmare began on the night of Dec. 11 when they were seized by men armed with AK-47 rifles from the all-boys Government Science Secondary School in Kankara village in Katsina state in northwestern Nigeria. They were marched through a forest and forced to lie in the dirt amid gun battles between their captors and the troops pursuing them.

The boys described walking through the bush and different forests, stopping during the days and walking at night without shoes, stepping over thorns and stones.

Nigeria’s Boko Haram jihadist rebels claimed responsibility for the abduction, saying they attacked the school because they believe Western education is un-Islamic.

As the boys’ parents anxiously awaited any news, many in Nigeria and around the world were bracing for a long, drawn-out hostage situation. Many feared the boys would be forced to become child soldiers for Boko Haram.

“I think we can say … we have recovered most of the boys, if not all of them,” he said.

Masari told The Associated Press that no ransom was paid to secure the boys’ freedom. It’s not known if other concessions were made.

Masari said the government will work with the police to increase security at the Kankara school and other schools. Only one policeman was working at the school when it was attacked, according to the students.

The schoolboys’ abduction was a chilling reminder of Boko Haram’s previous attacks on schools, especially the April 2014 mass kidnapping by Boko Haram of more than 270 schoolgirls from a government boarding school in Chibok in northeastern Borno State. About 100 of those girls are still missing.

“The difference, we know in this case, is that the government moved faster,” said Bulama Bukarti, an analyst on sub-Saharan Africa at the Tony Blair Institute.

In Chibok, it took weeks of advocacy and outcry from Nigerians, celebrities, and the international community before the government acknowledged that the girls had been kidnapped and took action. During that time, Boko Haram had the opportunity to put the girls into smaller groups and move them far away so it would be difficult to find them.

This time, the government deployed forces quickly after the boys’ kidnapping and the abductors rapidly found themselves surrounded, Bukarti said.

Their release is “a fantastic story at the end of an awful week,” he said. “Parents will be reunited with their loved ones … all of Nigeria will breathe a sigh of relief for a good ending.”

UNICEF Nigeria Representative Peter Hawkins called on the attackers to release any other children that may be held from this or other attacks.

“Schools should be safe. Children should never be the target of attack and yet, far too often in Nigeria, they are precisely that—victims of attacks on their schools,” he said.

He called on Nigeria’s government to put better interventions in place “to ensure that schools are safe and that all Nigerian children can learn without fear.”

“While we congratulate the Federal Government for working hard to secure the release of these boys, and the parents for the joy of having their children back, more needs to be done,” CAN’s Ayokunle told CT.

He urged Buhari’s administration to “place high value on all lives” and reexamine the security infrastructure, given that Boko Haram seems to be spreading from its stronghold in the northeast. “We [at CAN] are after a secure Nigeria from North to South. The government should be humble enough to rejig our security architecture and change those in charge for a more effective delivery.”

President Muhammadu Buhari welcomed the boys’ release and met with all of them Friday, encouraging them to pursue their education despite the attack and abduction they endured.

“This little difficulty you have faced in life should not deter you. You should gear up, ginger up, and pursue your dreams in life,” he said. “Because I went to school I have risen to become president twice, so education is the key to success. Do the best you can to acquire education and even religious knowledge so that it will guide you and your family in future.”

After their release late Thursday, Buhari stated that his government needs to do more to make schools secure from such attacks, and to protect the life and property of Nigerians, acknowledging the northwest presents a true challenge for his administration.

Many thorny problems remain in Nigeria.

The kidnapping shows that Boko Haram has been able to recruit armed gangs in Nigeria’s northwest, a worrying sign as the criminal gangs have increased attacks in the region this year, killing more than 1,100. While the bandits don’t have ideological motivations, Bukarti said, it has become clear that Boko Haram’s leader, Abubakar Shekau, has been able to make alliances with some of them.

“Shekau started courting some of the bandits,” back in January, Bukarti said, referencing a video launched by the Boko Haram leader explaining his ideology and in which the last 15 minutes he spoke in Fulani, the language of most of the bandits in the northwest, including the ones who spoke in the video released by Boko Haram this week. Later, Boko Haram made claims that they had penetrated parts of the northwest.

While that future may not be clear, the boarding school kidnapping shows that there was clear recruitment and Bukarti says that he would go as far as calling some of these local gangs Boko Haram associates now.

Boko Haram may well extend their reach into the northwest, he said, adding that they also got publicity.

“This was a major propaganda point and that’s what Boko Haram and terrorist groups survive on,” he said.

Though the government reaction to this kidnapping was fast—it had a rescue mission by the next day—criticism remains over the government’s handling of violence and how it will continue to grow in the West African nation.

Many Nigerians blame Buhari for the security lapses in the country and the opposition People’s Democratic Party (PDP) says the abduction of the students in Katsina, the home state of the president while he was on a visit there, raises further serious questions over the government’s capacity to fight insurgency.

The PDP said President Buhari’s inability to manage Nigeria’s security has opened the country “for terrorists, bandits, vandals, and insurgents.”

“While welcoming the release of hundreds of abducted Katsina schoolboys, we’re concerned that the nation still remains ravaged by such insecurity that an atrocity bigger than Chibok could still happen in Nigeria six years after,” stated Emmanuel Ogebe, managing partner of the US Nigeria Law Group and special counsel for the Justice for Jos Project, in a press release. “The nation cannot continue to be held to ransom by the vulnerability of our school kids in full glare of the global community at every whim of terrorists.

“In a contrived affair, Boko Haram contracted Fulanis to abduct Fulanis to embarrass a Fulani president. Somehow, they sorted themselves out with or without Buhari’s input just in time for his birthday and for Christmas,” he stated.

“How does this engender a sense of justice, fairness, and equality for people of different faiths in Nigeria?”

The release of the mostly Muslim boys—only a handful were Christians—brought Gideon Para-Mallam a “mixture of joy and sadness.”

“They are young innocent children, and everything needed to be done to secure their freedom. I am happy this was done at the shortest time possible,” the president of the Jos-based Para-Mallam Peace Foundation told CT. “[Yet] this news brought sadness to my heart as I thought about many Christians who are still in captivity.

“Is Nigeria truly one country? Are the citizens having the same value in the eyes of our government? … Are Muslim captives and victims more favourably treated by the government than their Christian counterparts?” asked Para-Mallam.

“Think about the Chibok girls, about 103 of whom have been in missing for over six years now. Since April 2014, Leah Sharibu and Alice Ngaddah both held for almost three years; Grace Tuka for one and a half years; Lilian Daniel Gyang for one year by January 9. Pastor Polycarp Zongo and two women kidnapped in October.

“Yet there is no sign of freedom for these innocent lives.”

After 330 Schoolboys Freed from Kidnappers, ...