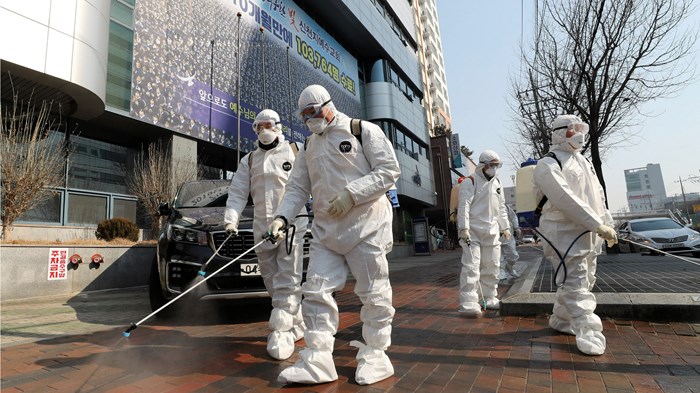 SEOUL — An apocalyptic sect whose leader claims he is an angel of Jesus has become the biggest cluster of coronavirus infections in South Korea, which now leads the world in cases of COVID-19 disease outside of China.

President Moon Jae-in has put his country on its highest alert for infectious diseases, ordering officials to take “unprecedented, powerful” steps to fight a soaring viral outbreak tallying 1,100 cases and 11 deaths, mostly linked to a congregation and a hospital.

More than 400 of those infected have been directly linked to a single house of worship, a Daegu branch of the Shincheonji Church of Jesus, Temple of the Tabernacle of the Testimony—viewed as a cult by mainstream Korean Christian organizations—where a woman in her 60s attended two services before testing positive for the virus. Nationwide, the Korea Centers for Disease Control and Prevention (KCDC) attributed 501 of 977 cases (as of the last breakdown on Feb. 25) to Shincheonji members.

Officials are also investigating a possible link between churchgoers and the spike in infections at the Cheongdo hospital, where more than 100 people have been infected so far, mostly patients at a mental illness ward.

Health officials were screening some 9,300 church followers, and said that 1,261 of them have exhibited cough and other symptoms. Late Tuesday, Shincheonji provided a list of 212,000 members which the government pledged to screen for respiratory symptoms, reported Yonhap News Agency.

Among them, four had traveled abroad in recent months, including one to China, although that trip came in early January and was not near Hubei.

More than 1,000 churches and other facilities operated by Shincheonji in South Korea have been closed, and members have been told to instead watch services on YouTube. The sect’s teachings revolve largely around the Book of Revelation.

What Martin Luther Teaches Us About Coronavirus

It Doesn’t Matter If the Coronavirus Whistleblower Was a Christian

Health and city officials say the “patient zero” who first tested positive had contact with some 1,160 people, both at the church, a restaurant, and a hospital where she was treated for injuries from a car accident.

Shincheonji blamed the woman for the spread of the disease, saying it has been advising followers since late January to stay home if they had traveled overseas or were experiencing even mild cold-like symptoms. Sect officials said the woman assumed she was having the common cold.

Shincheonji, which translates as “new heaven and new earth,” was established in 1984 by Lee Man-hee, who has been accused by mainstream Christian groups as a false prophet or a cult leader. The sect describes Lee as “the Promised Pastor,” an attendant of Jesus sent to testify what he claims are the fulfilled prophecies from Revelation.

“Shincheonji followers believe Lee Man-hee is immortal and has an eternal life,” said Ji-il Tark at Busan Presbyterian University in South Korea. “To propagate their belief, they often approach their relatives and acquaintances or sneak to other churches without telling them they are Shincheonji members.”

Tark said Shincheonji followers are likely more vulnerable to virus infections as they often sit very closely on the floor during services. Attending the sect’s gatherings “isn’t an option, but a requirement.”

“This disease case is seen as the devil’s deed to stop the rapid growth of Shincheonji,” Lee told his followers, according to images published by Yonhap and noted by Reuters. “Just like the tests Job went through, it is to destroy our advancement.”

The sect said in a statement it was fully cooperating with government quarantine efforts and accused mainstream church groups of spreading false claims, such as that it initially instructed followers to keep silent about the illness.

A petition asking Korea’s president to dissolve Shincheonji gathered more than 750,000 signatures in four days, almost quadruple the threshold (200,000 in 30 days) that requires the Blue House to publicly respond. However, church leaders worry such a move could give the government an excuse to do the same to regular religous groups later, Yong J. Cho, general secretary of the Korea World Missions Association, told CT.

Cho said that many in Korean society "do not understand the differences well enough" between cultic groups and regular churches. He told CT that Shincheonji used to be secretive and kept a low profile in regular churches, but in November 2019 the group announced a graduation of almost 104,000 trainees (as noted on the massive banner above the now-closed Daegu church).

“Almost all churches have been affected by the strong threats from [Shincheonji],” said Cho. “No Christian leaders say that we have to show [special] love to them. Individually, we have to treat and cure the patients same as any other ones in Korea.”

Based on his review of Christian discussions on social network services such as KakaoTalk, Cho said it’s “difficult to say what percentage of Korean Christians think that this is divine judgment on the cult.” However, many do see it as “the right time to disclose the dark side” of the group.

Shincheonji is Korea's largest heretical movement, with branches in 40 countries, according to Bareunmedia (Right Media). In a June report entitled “South Korea’s Major Heretic and Pseudo-Religious Groups,” the media group—which focuses on educating non-Koreans about Korean Christian heresies—said Shincheonji’s method of propagation through innocuous surveys and secretive Bible studies causes more problems for Korean missionaries sent abroad “than any other issues with language or cultural differences.” 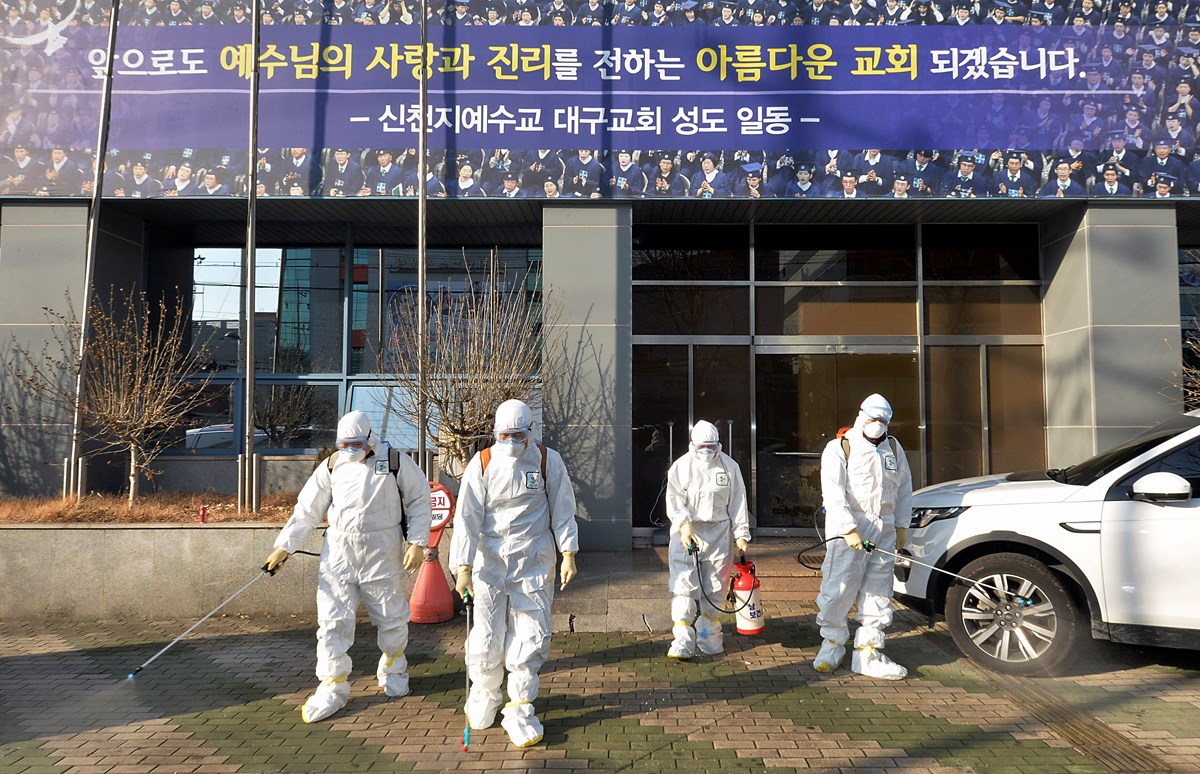 Workers wearing protective gears spray disinfectant against the coronavirus in front of a Shincheonji church in Daegu, South Korea.

President Moon said his government had increased its anti-virus alert level by one notch to “Red,” the highest level. The step was last taken in 2009 to guard against a novel influenza outbreak that killed more than 260 people in South Korea. Under the highest alert level, authorities can order the temporary closure of schools and reduce the operation of public transportation and flights to and from South Korea.

Moon said the outbreak “has reached a crucial watershed,” and that the next few days will be critical. “We shouldn’t be bound by regulations and hesitate to take unprecedented, powerful measures,” he said.

Shincheonji tried to defend itself from growing public anger directed at the group.

In a video statement posted on its website, church spokesman Simon Kim said Shincheonji has shut down 74 local churches and other facilities since its church member in Daegu became the first patient to test positive for the virus on February 18.

Earlier Sunday, Daegu Mayor Kwon Yong-jin said there were concerns that the number of those infected in the city could see yet another massive increase because authorities were launching intensive examinations of church members with virus-related symptoms.

South Korea earlier informed Israel that a group of tourists who traveled to Israel and the West Bank for a week this month tested positive for the virus upon returning home. Israeli and Palestinian health authorities asked people who were in close contact with the tourists to quarantine themselves.

South Korean health authorities said Sunday that 18 of the 39 South Koreans who had made the group pilgrimage later tested positive for the virus. The 21 others were being tested. Forty-one Catholic churches in their neighborhoods halted Sunday Masses and other gatherings.

The news led a dozen nations to place warnings or restrictions on travel to and from South Korea, according to Yonhap.

Workers wearing protective gears spray disinfectant against the coronavirus in front of a Shincheonji church in Daegu, South Korea.
expand