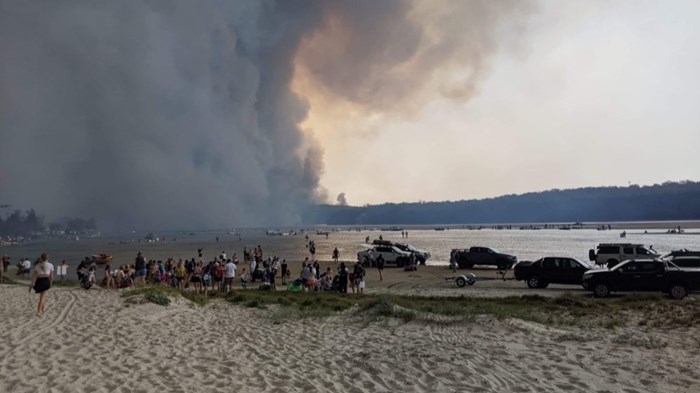 Every summer, hundreds of young Australians devote two weeks to running Christian programs for families and youth on the beaches of New South Wales and Victoria.

But cataclysmic fires in southeastern Australia have interrupted the efforts of Scripture Union teams in the nation’s most populous states.

Scripture Union has served in the Victoria beach town of Mallacoota for more than 30 years. But when teams showed up to the vacation town this year, the winds changed and the fires began immediately threatening Mallacoota.

As the blazes inched closer, leader Chris Mulherin and his team, along with hundreds of locals and tourists were evacuated to a movie theater were they spent hours in the hot building listening to sirens roar and gas bottles explode outside.

“Part of the sense of wanting to stay was the commitment to the local youth who had been through this extraordinarily difficult experience,” said Mulherin. “Some of them had lost their homes. Others hadn’t. Most of the [tourists] were actually evacuated so they moved on or were going to move on but the locals obviously were still around and so there was this sense that we didn’t really want to leave them.”

One night later, Mulherin and his team opened up a space for young people—locals and tourists alike—to come and process their experience. Then, the students headed back to Melbourne on a boat shortly after Victoria’s premier designated the area as a state of disaster, with Mulherin by helicopter a few days later.

The Australian bushfires have torched more than 24 million acres and spread across all six states. A New York Times article described the scale as “an area almost as large as West Virginia, more than triple the area destroyed by the 2018 fires in California and six times the size of the 2019 fires in Amazonia.” The fires have also killed at least 25 people and hundreds of millions of animals and destroyed thousands of buildings, including at least one church.

The Billy Graham Rapid Response Team announced this week that it would be deploying two groups of crisis-trained chaplains from the US, Canada, and the UK to Victoria and New South Wales. Nearly 40 chaplains have been traveling alongside Samaritan’s Purse since last fall as the organization has responded to the fires.

“God has been reminding me the beautiful words in Matthew’s Gospel: ‘Come to Me all who are weary and burdened, and I will give you rest,'” said Steward Beveridge, who leads the ministry’s rapid response team in Australia and New Zealand. “When I have the opportunity to talk with people, there are tears and a moment of silence as they reflect on the words and take comfort in them.”

The board of directors of A Rocha Australia, part of an international Christian conservation group, acknowledged that the fires had affected them personally, through assisting the evacuated or working with other environmental groups.

“We are also pausing in prayer and reflection, to meditate on gospel truths, and to bear with others amidst our grief,” the board said in a statement. “And we are worshipping the Lord through creation care mission as we seek to be salt and light, in our own small way, to people who are in shock, angry, and despairing at the fires.”

A Rocha Australia also said it was building partnerships with Christian and non-Christian conservationists to aid with the recovery.

“We are looking for opportunities to engage Australian churches to see this disaster through a scriptural lens, in repentance and obedience, rather than simply as a political issue,” its board stated. “This is a challenge for Christians and churches in a nation where climate and environmental politics are so polarized, often being based upon political ideology rather than science, the Scriptures, and the new climate reality.”

More than half of Australian churchgoers (56%) believe that humans are largely responsible for climate change, according to the 2016 National Church Life Survey. The same number of churchgoers agree or strongly agree that they have a moral duty to do something about climate change, and nearly half (48%) said that Australia should immediately address climate change even if the steps were costly.

Among senior church leaders, about a quarter (27%) say that they often or sometimes preach on the environment or caring for the earth.

“The church needs to be speaking up and not shying away from it or just adhering to some of the traditional issues that certain sections of the church think is our main area of focus. The church needs to be focusing on climate change and creation care,” said Mick Pope, a professor of environmental mission at Missional University, in a piece from Eternity titled “Now Is the Perfect Time to Talk About Climate Change.”

Last month, Hillsong founder and senior pastor Brian Houston announced that the denomination was organizing a campaign that would support both short- and long-term recovery. Some of the funds raised would support firefighters, while other money would go to the Salvation Army, which was offering shelter, food, and water to those evacuated by the fires. He also said that the megachurch would work with network churches to support long-term help.

“As a church, we are committed to pray and believe God for drought-breaking rain to quench our dry and parched land,” he wrote. “We believe there is hope in Jesus, and in Him, unshakable promises on which we can stand firm on behalf of our nation.”

Back in Mallacoota, bed and breakfast owner and Christian David Jeffrey became an international face of the crisis after telling his story of escaping an approaching line of fire to BBC News and SkyNews.

Jeffrey was among several in his community who had resisted evacuating, deciding instead to defend his home. He said that he specifically asked God to change the direction of the wind as the 60-foot-high wall of fire traveled nearly 60 miles an hour in his direction.

After he began praying, Jeffrey said that he felt the fire change.

“I heard God say to me, ‘pray.’ I started off with a pathetic little prayer. … Then within me, this faith rose up and said ‘who are you praying to?’ And I thought, ‘Yes! You’re the God of the Bible. Nothing’s impossible with you!’ ”

Subscribe to CT and get one year free
Tags:
AustraliaGlobal Warming and Climate ChangeInternationalNatural Disasters
Posted by:
Morgan Lee