An interview with Lazarus Yeghnazar on why Western Christians should focus on leaders not numbers in the Islamic republic.
Interview conducted by Dane Skelton|January 9, 2020 10:29 AM 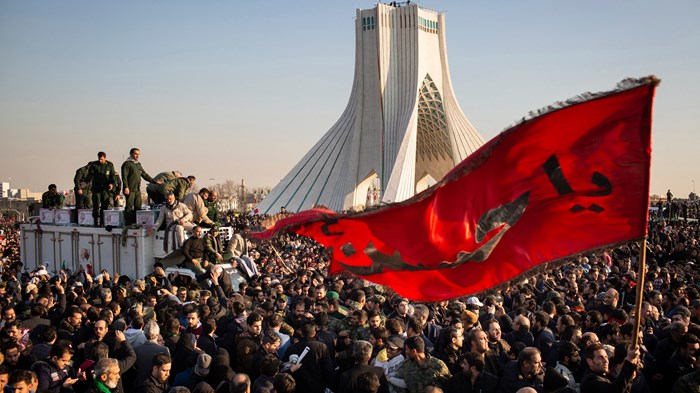 Shortly after the war ended, the couple emigrated to the United Kingdom, where they began sending money to friends and church leaders in Iran. That effort eventually became 222 Ministries International, a church-planting and training network—still run out of Lazarus’s converted garage—that includes satellite television broadcasts and more than 50 underground churches in Iran. His brother, Sam, founded Elam Ministries, and his nephew, David, now leads that outreach to Iran.

In an interview last year, Yeghnazar predicted that Iran would open up soon and explained how Christians should prepare. In a follow-up this week, he explained how Suleimani’s death affects Iranian Christians.

How are Iranian Christians reacting to Soleimani’s death?

Now, with the drumbeats of war increasing, there is complete uncertainty and anxiety. What will happen in case of an escalation of hostilities and engagement in a war? Still, the very bitter memories of the eight-year war with Iraq remain. Iranian Christians will suffer more than any segment of society.

How might Iranian Christians be affected by Soleimani’s death? In other words, might this be the beginning of the “tsunami of opportunity and disaster” you predicted?

In case of a war, thousands of Christian families will become internally displaced as well as thousands will flee the country. It will be a humanitarian crisis. Meanwhile, I believe that tens of thousands of ordinary Iranians will flee the country as well, arriving in Armenia, Turkey, Azerbaijan [etc.], thus creating the largest-ever evangelism opportunity. This harvest is huge and will need great collaborative work. We need to connect, pray, plan, and prepare.

Why do you think Iran will open soon?

We are carefully watching [key] elements within Iran. … Iran is like a bus going down a hairpin-turned mountain road with no brakes. Anybody watching can see that they are going to die. Everybody wonders, “When will the driver jump out?” So, the question is: When will the Ayatollahs jump?

“One day, Iran will open. The way we behave as Christians when that happens will determine the future of the Church in Iran.”

I have been watching this situation very carefully, and already some of the Ayatollahs are abandoning the bus. Where are they going? Some are going to Russia, where their friend, [Russian president Vladimir] Putin, will accept them. But they do not have many other places to go. No Sunni country, like Saudi Arabia, will accept them. Iraq? Maybe, but probably not. Malaysia maybe?

Iran is imploding due to things happening inside. I pray for peace. But the DNA of the Revolutionary Guards is agitation and confrontation. They cannot live in peace. From day one, they have been at war with the world. For example: When the roadside bombs started blowing up in Iraq, I said, “This is from Iran.” Now, it’s the war in Yemen, the war in Syria. Those wars would be over if Iran weren’t present, feeding them. Everyone is worried about Iran getting a nuclear bomb. I won’t go into whether I think it is Iran’s right as a country to have one, like many other countries. But I do ask, “What do you think a regime like that, with that kind of DNA, would do with one?”

The regime in Iran is going to provoke the West to attack. Who knows how long that will take? But when it comes, it will create a tsunami of disaster and a tsunami of opportunities. And the church is ill-prepared to meet those opportunities. That’s why we are so committed to leadership development for Iran.

How did Islam become so dominant?

People lose sight of what happened in the past. Why, in the seventh century, was Islam able to walk in and people surrendered? The church had been there for hundreds of years. But every time Christians became rich and powerful, they subjugated others and dismissed them. The Christian church became landowners and levied taxes on the people. We forget about that reality.

When we lose sight of what God has called us to be, light and salt, we lose our influence. I believe the church, down to this day, has not figured out how to do godly governance inside a nation. Every time we mingle with politics and governance, we become corrupt. Like Elisha’s servant, Gehazi, we seek wealth, and we become lepers. When Islam came to Iran, it was not as if the church had not had the opportunity. The church had missed the opportunity.

If Iranian Christians get involved in governance, how will they protect themselves from the corruption so endemic to it?

When people ask, “Is it right for Christians to be in politics?” the answer is yes—if they can bring godly governance to the table. What will happen I don’t know. But I hope that we will have some Daniels and Esthers and Mordecais and Josephs who will be wise and provide for food in times of famine … so that people will say, “These Christians truly honor Jesus.” Because we do very well at serving the poor, but we are not very capable at serving the rich.

One day, Iran will open. The way we behave as Christians when that happens will determine the future of the Church in Iran. If we mess it up, it will be an unforgivable act.

How should the church be preparing leaders for a future role in Iran?

Daniels and Esthers are not produced en masse. It must be done as individuals. I think with all the excitement about mission opportunities in Iran that we are missing the point. Part of the problem is the model that the donors want to fund.

If I say to you, “Here is $5 million. You have two choices on how to spend it for the kingdom: You can lead 5,000 people to Christ, or you can develop 10 Apostle Pauls.” What would you do? I would not even blink. I would spend it on Pauls every time.

My concern is that God is going to open Iran, and we are not ready for the opportunity. All we can think of is going there and taking back some of our church buildings, doing some painting and remodeling, buying some new pews, and picking up where we left off. That will not transform the future generation.

We need some arrogant businessmen in the church, some blingy leaders. We need some aggressive thieves like Zacchaeus and killers like Paul, and we need to take them and polish them. The church cannot keep all these people in her womb and miscarry all this potential leadership by mislabeling them as “proud.” They are proud, and they are arrogant. They are extremely intelligent and assertive. But we need to give them time to mature. It takes patience to deal with this kind of person. It takes one-to-one mentoring. For the time we have remaining in ministry, I would like for 95 percent of mine and Maggie’s time be spent training and preparing these rugged, ghastly, arrogant individuals who love God. But their character needs transformation and reformation.

If I have any message for Western Christians, it is that. Don’t go after numbers. How deep is the growing church? How committed is the growing church? Because that tsunami will come, and if the seeds have not gone deep in the hearts of the believers, it will wash away. Then we will sit down and lament, “Oh, there was no revival after all!” No, that is not it. We will have lost the opportunity that was before us.

Dane Skelton is a Virginia-based pastor and author who blogs at daneskelton.com.