What women may refuse to disclose to researchers at a clinic, they’re confessing in Bible studies decades later.
Maria Baer
January 22, 2020 9:00 AM 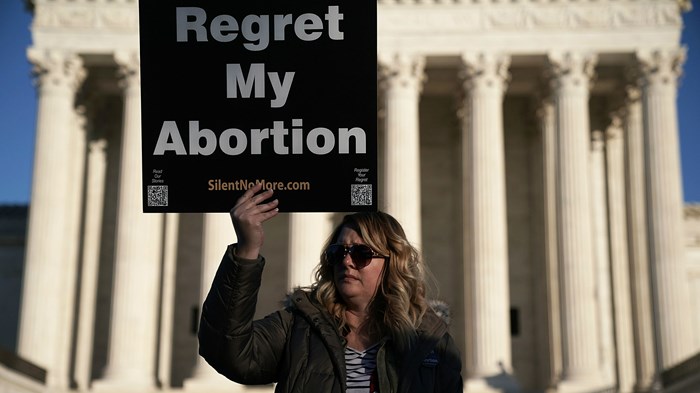 Pro-life advocates and ministry leaders are challenging the results of a new study that found that most women do not suffer emotionally after an abortion, and that over time, they are less likely to express regret.

Researchers from the University of California at San Francisco (UCSF) followed 667 women across 30 clinics after they received an elective abortion, finding that the majority had either positive feelings or no emotion at all toward their decision both a week later (71%) and five years later (84%), according to a study released last week in the journal Social Science & Medicine.

Corinne Rocca, one of the study’s authors and UCSF professor, said that the study proves that the idea that women will develop negative emotions after an abortion is a “myth” and a “red herring.” Rocca has also participated in multiple research studies and written several articles for the Guttmacher Institute, the research arm of Planned Parenthood.

While pro-choice advocates have used the findings to suggest that the idea of “abortion regret” is merely a scare tactic from pro-lifers, critics say the sample for the survey doesn’t justify the debunking its authors have touted in the media.

Writing for the National Review, researcher Michael J. New noted that women who volunteer to respond to questions following an abortion are more likely to be the ones who feel positively about it, and therefore the findings do not represent the full spectrum of women who have had abortions. New—a professor at the Catholic University of America and a scholar with the pro-life Charlotte Lozier Institute—noted that of all the women asked to participate, less than 40 percent agreed, and roughly 30 percent of the 667 who participated had stopped responding by the end of the five-year study.

Plus, Christians working in post-abortive ministry have seen abortion regret stir up in women long after the five-year span of the research.

“The majority of women we see are usually 15, 20, 30, 40 years removed,” said Carrie Bond, former national training director for Surrendering the Secret. Counselors and staff like Bond are particularly likely to encounter those who have grown to regret their abortions, or to discover that they had been holding back the emotional weight of the decision.

Abby Johnson, the former Planned Parenthood staffer who went on to become a pro-life advocate, shared a similar observation on Twitter: “Here’s real talk. Trauma doesn’t usually present until 10-15 years post-traumatic event. Those women have NO idea how they will feel about their abortions many years later.”

Bond said most women are culturally conditioned to either hide their abortion or celebrate it. “Those are your two choices,” she said. “Be silent, or say ‘It hasn’t affected me!’” Some may not even realize that some of the negative symptoms they experience in the years following their abortion—nightmares, or an eating disorder, for example—may have been triggered by their experience.

Bond also questioned the researchers’ conclusion that the lack of emotion is positive. Far from a good thing, she said that can be actually evidence of trauma. One of the most common symptoms of post-abortion stress she sees in women is emotional numbness. One study conducted in the early nineties by pro-life researchers found that 92 percent of women experience some level of “emotional deadening” up to 10 years after their procedure. (That study surveyed 260 women who had actively sought post-abortion counseling.)

While post-abortive ministries, by their nature, are likely to draw in women who are experiencing regret and seeking a place for healing—their work is not miniscule. As Julie Roys wrote for CT in 2015:

In the past 20 years, abortion recovery groups have multiplied in churches nationwide. Surrendering the Secret has trained about 2,500 leaders in churches and crisis pregnancy centers. Another leading recovery ministry, Rachel’s Vineyard, hosts about 1,000 retreats annually in 48 states and 57 other countries. Yet, these statistics pale in comparison to the number of post-abortive women in the church (not to mention the men who carry regret over their wives’ or girlfriends’ abortions).

The Silent No More Campaign, a project of Priests for Life and Anglicans for Life, has hosted 6,469 women and men sharing their abortion testimonies. “I Regret My Abortion” is a slogan on its campaign protest signs.

Abortion rates have been falling for the past few years, reaching an “historic low” of 625,000 in 2016, the latest year data from the Centers for Disease Control are available. Statistically, 625,000 abortions means there were 12 abortions for every 1,000 women of child-bearing age in the US that year. That number may be higher, given that reporting abortion numbers to the CDC is voluntary for states. Still, it adds to a staggering total. Researchers from varying ideological backgrounds estimate roughly 60 million abortions have been performed in the United States since the Supreme Court decided Roe v. Wade in January 1973.

In the UCSF study, researchers approached possible participants at abortion clinic sites. But that potentially left out a subset of women: those who obtain medication abortions. In some states, women can get prescriptions for the abortion medication protocol via a video consultation with a doctor or nurse practitioner and never have to step foot into a clinic.

The Guttmacher Institute reports that medication abortions are on the rise, accounting for more than a third of all abortions recorded in 2017. The most commonly-used medication abortion protocol is only prescribed in the first trimester and includes two drugs: the first blocks the embryo from receiving vital progesterone. The second, taken 24 to 48 hours later, induces labor.

The medications are currently regulated by the Food and Drug Administration and in some states must be administered by a licensed doctor or other medical professional, but pro-choice groups are pushing against such regulations.

Chuck Donovan, president of the Charlotte Lozier Institute, worries that medication abortions have the potential to cause more trauma than an in-clinic procedure, as women may feel more responsibility over the abortion when they have to take the medication themselves. He also said a medication abortion presents the possibility that a woman will see her deceased baby after the medication runs its course.

Bond at Surrendering the Secret said she’s counseled many women who had that exact experience. She agrees the trauma from medication abortions may be even more acute than that experienced after a surgical procedure. “You’re not told the truth, and then left alone to suffer through the trauma: intense cramping, hemorrhaging, delivery of baby,” she said

The UCSF study also reported that 95 percent of the women they spoke to said they were confident that abortion was the right decision for them. But Bond said even women who express strong confidence at the time of their decision (or even shortly afterward) are still at great risk for post-abortion stress. Expressed confidence at the abortion clinic may in fact be denial, she said, and that could fade later.