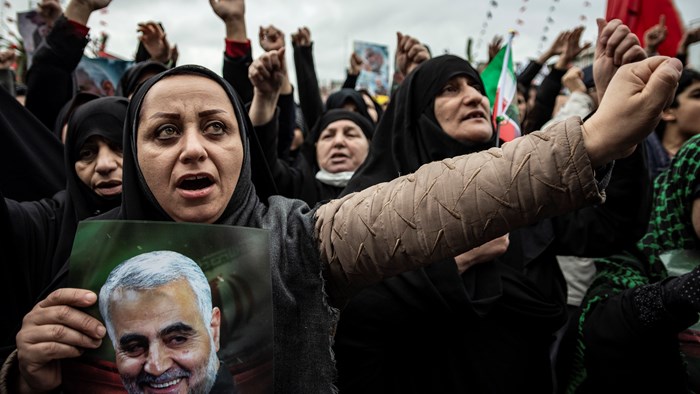 He also enraged Sunni Muslims by engineering the subsequent Iranian defense of Syria’s regime, led by President Bashar al-Assad. With Russia and the Iran-backed military wing of Lebanon’s Hezbollah, the shelling of rebel-held cities resulted in the displacement of thousands during Syria’s civil war.

But Soleimani was also acclaimed for his role in fighting ISIS, personally directing Iraqi militias from the front lines.

Thus, Middle East Christians have mixed feelings about his death—and the immediate aftermath.

Some Syrian believers see no benefit to anyone.

“Iran was working with the US government in certain agreements. Why did you destroy them?” asked Maan Bitar, pastor of the Presbyterian churches in Mhardeh and Hama, noting both the fight against ISIS and the nuclear deal.

“This will prompt a severe reaction that will hurt America, and others.”

But not Christians. The general to replace Soleimani would continue Iranian policy, said Bitar.

And within this policy was a commitment to treat Christians well. Bitar believes Iran is very concerned to be viewed as an ethical people who fear God.

“When they made use of a deserted home, whether Muslim or Christian,” he said, “they left it in cleaner condition than when they entered.”

Bitar contributed to reconciliation efforts where the Syrian regime recaptured territory. But not everyone viewed the Iranian role as positive for Christians.

And overall, the instability of war resulted in the loss of 75 percent of Syria’s Christians, according to Open Doors, which ranks the nation No. 11 on its watch list of the 50 countries where it is hardest to follow Jesus.

“There is an agreement between the extremist elements and the regime … and the Iranian militias,” Samira Moubayed, vice president of Syrian Christians for Peace, told Syria Direct. “[All] aim to displace Christians and change the culture [of Syria].”

Though this was not witnessed by Bitar, it was by Ashur Eskrya, president of the Assyrian Aid Society branch in Iraq. Iranian-backed Shabak Shiite militias patrol the ancient Christian homeland of Iraq’s Nineveh Plains.

Like in Syria, it is good propaganda to be conciliatory, he said. Iran promotes its interests through aligned Iraqi Christian militias and politicians.

But the Shabak have also prevented Nineveh’s Christians from returning home.

“If you have fighters who don’t follow the rules and want to change demography, it is the same as ISIS,” Eskrya said. “Soleimani is not Baghdadi [the American-killed caliph of ISIS], and the Shiite way of fighting is different from jihadis.

“But the agenda is the same.”

Eskrya highlighted the Nineveh Plains city of Bartallah, whose population used to be 100-percent Syrian Orthodox. Instability during the Iran–Iraq war resulted in the city’s Shiite population growing to 10 percent.

Today, the Shiite share is more than 50 percent, Eskrya said.

But Christian life continues in the now-mixed Bartallah. The city’s Christmas tree bore pictures of security forces who died to liberate the plains from ISIS. And local Christians expressed optimism for Iraq, due to the Shiite-led non-sectarian protests raging against corruption and foreign influence.

Last July, the US sanctioned two militia leaders—one a Christian—for ignoring Baghdad’s orders to withdraw from the Nineveh Plains to facilitate refugee return.

Their deaths may result in an opening for US–Iran negotiation, Eskrya hopes. But more likely is an increase in conflict through paramilitary retaliation.

Iran is pragmatic and will not directly escalate conflict with the United States, Eskrya believes. But Bahro thinks war is likely, and that Iran has learned nothing of America’s red lines.

Both call for an expanded US presence in Iraq, as international protection is the key to stability.

“We need a period of time for the young, educated generation to take control,” said Bahro.

“Until then, we urge everyone to resolve differences peacefully, because the only losers are the non-militarized civilians and children, including Christians.”

But neither has Iranian interference—though unlike others, he sees it as a mixed bag.

Through Hezbollah in Lebanon, Iran has helped elevate the marginalized Shiite population to balance the historically dominant Christians and Sunnis. But Hezbollah’s weapons and fealty to Iran hinder Lebanon from achieving a genuine domestic pluralism.

Looking back on Syria, it might be positive for Christians that the regime is still in power, Accad said. But Iran’s and Hezbollah’s early militant defense of Assad helped kill off the original legitimate uprising. And Christians only needed rescuing in the first place because of Iranian intervention.

In Iraq, Tehran’s role has been the most negative, stoking sectarianism as some Shiite leaders imitate Iran’s theocratic ethos of government against a secular state.

But killing Soleimani will likely only make things worse.

Lebanon’s protest movement is tilting toward violence, while Hezbollah has pledged revenge against the US (exempting civilians).

“Catholics and Orthodox are trapped in a centuries-old survival mentality, while Protestants have too narrow a focus on evangelism,” Accad said.

“We have been far too quick to accept the status quo, hoping the visa application succeeds.”

Instead, Arab Christians must change their mentality to view themselves as a vital part of society seeking the common good. Much of Shiite aggression is based on a narrative of victimhood—which followers of Jesus are uniquely positioned to address.

“Embrace the model of Christ as the wounded healer,” he wrote at the seminary’s blog.

“[Then] we can come to terms with our own woundedness, and find in it a source of healing for societies around us.”

Even so, there will be resistance, Accad warned. A sense of victimhood is powerful, and helps maintain loyalty.

“Work toward reconciliation, toward peace, and if you are wounded in the process, okay,” he said.

“Just remember that your Master was persecuted before you, and keep working for his kingdom’s values.”

Until then, and following an immediate retaliatory missile attack on US bases in Iraq, the region has maintained a tacit calm. Is Iran biding its time, or is another explosion coming?

“For now, everything is normal,” said Eskrya.

“Tomorrow, only God knows what will happen.”