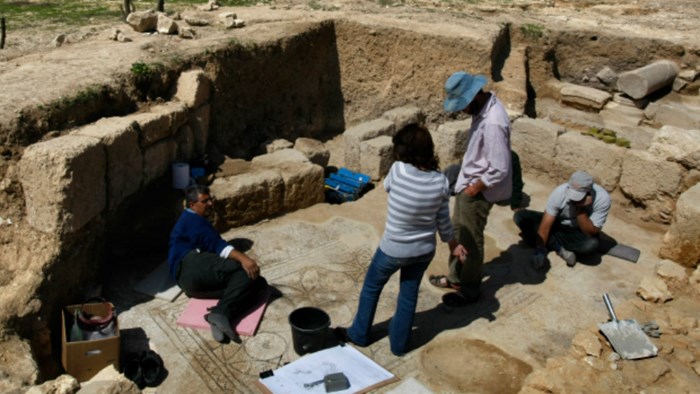 Image: David Silverman/Getty Images
Israeli archaeologists clean a mosaic in the ruins of a church that dates back to the Byzantine period.

After they were dismissed from Southwestern Baptist Theological Seminary (SBTWS) within a few minutes of each other in March, Steve Ortiz and Tom Davis put their heads together to pray and figure out what they were going to do.

Ortiz and Davis were both seasoned directors of archaeological projects in Israel and across the Middle East. While at SWBTS, the third-largest seminary in the United States, they saw the Tandy Institute for Archaeology contribute to the school’s growth and vision. The institute had about two dozen MA and PhD students, making it the largest archeological program at an evangelical school.

The two professors expected cutbacks in 2020 because of COVID-19 and ongoing financial challenges facing higher education. But they had no idea their jobs were on the line.

It didn’t seem right to them. As Ortiz and Davis reviewed their accomplishments of the preceding decade, they came up with a growing list of accomplishments. They’d done an amazing amount of research since Ortiz started as director.

“We saw how God had been growing the Tandy and providing us projects that were already funded and just needed our staff members and our students,” Ortiz told Christianity Today. “So we said, ‘Let's see if somebody will hire both of us.’”

One of the first people they called was former SWBTS president Paige Patterson, who had been a strong Tandy supporter before he was fired in 2018 for mishandling a student’s allegations of sexual assualt. Patterson suggested they talk with Mark Lanier, a Houston attorney and the founder of the Lanier Theological Library.

Lanier was in touch almost immediately and said he would like to see them hired at his alma mater, Lipscomb University, a 129-year old, Churches of Christ-affiliated school in Nashville. Ortiz and Davis didn’t know anything about Lipscomb, except that Lanier was on the board of trustees.

“God is amazing,” Ortiz said. “On the day we got our notification that we were being fired, we already had somebody talking about a potential job offer that evening.”

Lanier didn’t waste any time taking his vision to Lipscomb president Randy Lowry and the rest of the trustees. “I think within two weeks we had the entire deal put together,” Lanier said.

The new Lanier Center for Archaeology was announced on the college’s website Wednesday. Ortiz and Davis will join the faculty in the fall, and the school will start offering archaeology classes in January, when it expects to complete the accreditation process. There will be a graduate-level program as well as undergraduate courses.

Ortiz was the principal investigator and co-director of the Tel Gezer Excavation Project and is also participating in a dig at Tel Burna, both in Israel. Davis directs the Kourion Urban Space Project at the early Christian site in Cyprus and is part of an ongoing project documenting findings in a temple in Egypt.

Lipscomb provost W. Craig Bledsoe said the center for archaeology “will provide our faculty with new opportunities to collaborate as well as to share and apply their knowledge and expertise. We look forward to the impact this program will have not only on Lipscomb but also on the field of archaeological research on the whole.”

Lipscomb faces the same economy and the same coronavirus-caused disruptions as other Christian schools and universities, according to Lanier, but the administration and trustees were excited about the new opportunities.

“Lipscomb is looking at this as a wise use of our opportunities, resources, talents, and gifts,” Lanier said. “We want this program to grow and thrive and become a world-recognized program both within Christianity and even outside the Christian circles.”

The program is funded for five years, after which it will be reevaluated.

“Because of Steve Ortiz and Tom Davis, we will go from zero to 60 faster than a Tesla,” Lanier said.

Some of the students have filed a complaint against SWBTS with the Southern Association of Colleges and Schools (SACS), the regional accrediting agency. The complaint says that when a graduate-level academic program is canceled “SACS standards call for the need for teach-out plans to offer students a chance to continue their degree with 1) minimal disruption, 2) be reasonable, and 3) offer a chance to transfer to comparable programs.”

Like fellow professors, Oritz and Davis are not sure at this point how much of their teaching will be in person and how much will be online this fall. But they are eager to get started and pleased to have found a new home at Lipscomb.

“At SWBTS, we thought that was the end of archaeology,” Ortiz said. “And now all of a sudden we're at Lipscomb and we have a bigger footprint and an institute that wants us there, that’s a big difference.”