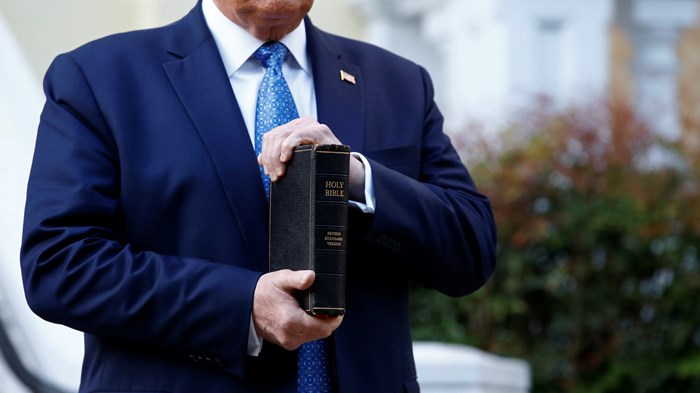 The American Bible Society says this is a time for Americans to hold on to the truths of Scripture, not just hold the book up as a prop.

The 200-year-old Christian ministry, which focuses on Bible access and engagement, issued a statement following President Donald Trump’s recent photo op—brandishing a Bible in front of a Washington, DC, church as part of his response to the national protests over George Floyd’s death—saying the holy text is “more than a symbol.”

The society has launched a two-week-long free Bible giveaway on its website.

“In this time of pandemic fear and social isolation, in this time of racial injustice and senseless violence, in this time of economic uncertainty and generational pain, we should be careful not to use the Bible as a political symbol, one more prop in a noisy news cycle,” said Whitney T. Kuniholm, senior vice president of the American Bible Society.

“Because, more than ever, we need to hear what’s true. ‘Let justice roll on like a river, righteousness like a never-failing stream!’ (Amos 5:24 NIV). ‘Yea, though I walk through the valley of the shadow of death, I will fear no evil: for thou art with me…’ (Ps. 23:4 KJV).”

Episcopal clergy presiding over the church where the president made an appearance Monday evening expressed “outrage” at the incident. They say they were caught off-guard by the visit.

The president did not go inside the church, nor did he quote or read from the Bible during his remarks. He posed with the book in front of the building.

To Sattler College historian Aaron Griffith, the move appeared deliberate. “It might seem strange, but it all fits together for him and his supporters.”

While some of the president’s evangelical backers applauded Trump’s response, which came amid ongoing protests in cities nationwide, others said this use of the Bible felt manipulative or disrespectful. Some likened it to when he signed Bibles during a visit to an Alabama church rallying for tornado relief.

Kuniholm’s statement brought up other political uses of Scripture, as it referenced John Quincy Adams, Abraham Lincoln, Dorothy Day, and Martin Luther King Jr. and “leaders of all political stripes (who) have solemnly held up the Bible and used it as inspiration in our most difficult moments.”

“Why do Americans turn to the Bible in times of national trauma?” he said. “Because the Bible is more than a symbol.”

While ABS works with a “global network of Bible champions” to translate, distribute, and promote the Word, its work has taken on more evangelical distinctives in recent years, including a growing focus on Bible engagement and literacy.

Historian John Fea chronicles what he sees as a shift from ecumenical to evangelical in his 2016 book The Bible Cause: A History of the American Bible Society. At the start of last year, ABS began requiring staff to sign a statement of faith, affirming that the Bible “provides authoritative guidance for my faith and conduct,” including sex and marriage.

The ABS president at the time said the understanding of Scripture required of their employees would not restrict who they reach: “We remain committed to making the Bible available to anyone who needs it, regardless of alignment on these values.”

ABS moved its headquarters from New York to Philadelphia five years ago and plans to open a history museum, called the Faith and Liberty Discovery Center, next year on the city’s Independence Mall.

ABS celebrates its American history connections, saying it was established by “a team of renowned patriots” including John Jay, the first Supreme Court justice; Francis Scott Key, who wrote “The Star-Spangled Banner”; and Elias Boudinot, one of the Founding Fathers.