As American bishops dedicate this week to religious freedom, including for Muslims in China, polls suggest a cresting of support for the church in need.
Jayson Casper|June 25, 2020 10:50 AM 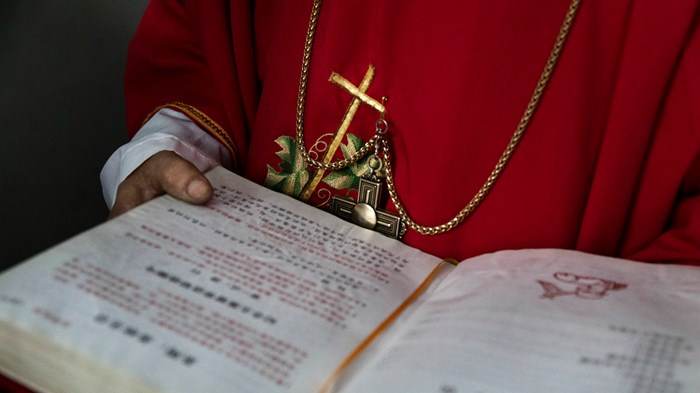 For the first time, American legislation in defense of international religious freedom has reached into the Chinese Politburo.

Passed by Congress with only one “no” vote, the action follows on the heels of this month’s release of the State Department’s 2019 Report on International Religious Freedom (IRF).

“America is not a perfect nation by any means, we always strive towards that more perfect union, trying to improve,” he said.

“[But] there is no other nation that cares so deeply about religious freedom.”

Such commitment was marked this week by the US Conference of Catholic Bishops (USCCB). Each day from June 22–29 highlights an issue of concern, whether domestic or international.

Yesterday (June 24) the focus was on China.

Last summer, the government-affiliated Chinese Catholic Patriotic Association—representing about half of China’s estimated 12 million Catholics—condemned US criticism after the State Department’s second Ministerial to Advance Religious Freedom advocated for the 800,000 to 2 million Uyghurs and other Muslim minorities who have been arbitrarily detained in internment camps.

But one month later, the Chinese government permitted the first consecration of a Vatican-ordained bishop—a result of Pope Francis signing a controversial 2018 deal with Chinese authorities in an attempt to unite Rome with the underground Catholic church.

The US bipartisan consensus evident in the Uyghur law reflects Pompeo’s assertion. First amendment rights guarantee freedom for all religions, and Americans generally desire for such liberty to extend worldwide.

But is there particular concern over Christian persecution? And is religious liberty eroding at home?

Aid to the Church in Need–USA (ACN–USA), an international papal agency that supports suffering and persecuted Christians in more than 140 countries, surveyed 1,000 US Catholics.

First conducted in 2018, the 2020 results were tallied in January and released in March. COVID-19 had not yet overwhelmed American attention.

At the time, more than 9 in 10 found the persecution of Christians to be “very” or “somewhat” severe. This percentage held firm from 2019.

While still high levels of concern, the 2020 percentage ranked lowest on the list of five global issues surveyed by ACN–USA.

But like Christian persecution, most issues also decreased from the year before, while the rankings changed slightly.

Human trafficking remained first, but fell from 82 percent in 2019. Poverty remained second, but fell from 74 percent. The refugee crisis was third, at 60 percent. And though climate change held steady at 57 percent, it ranked fifth—below Christian persecution—in 2019.

“Two years ago, the genocidal campaign waged by ISIS against Christians and other minorities in Iraq and Syria had only just begun to decline, but memories of that atrocity have faded since then,” said George Marlin, ACN–USA chairman.

“This may well help explain the apparently lesser concern.”

“I was relieved to see the religious freedom report wasn’t delayed and moved to the back burner,” he said. “Whether concern is down or not, it can’t be left to disappear.”

China, however, is not yet on the Catholic radar.

Iran ranked No. 1 on ACN–USA’s surveyed list of nations where the persecution of Christians is perceived to be “most severe.” It was followed by North Korea, Iraq, and Syria. Iran also topped the poll in 2019, followed by Iraq, Afghanistan, and North Korea.

Even following the agreement with Pope Francis, the Chinese government has recognized only 3 of an estimated 20 Vatican-consecrated “underground” bishops.

“There’s a great darkness over parts of the world,” Pompeo said in his rollout speech, “where people of faith are persecuted or denied the right to worship.”

China and Nigeria received special approbation in the latest IRF report. China was renewed by the State Department as a “country of particular concern.” Nigeria was placed for the first time on its “special watch list.”

Will these nations be reflected in ACN–USA’s 2021 poll?

“Will this lift Catholic concern? I don’t know. What is needed is repetition and consistency.”

At least prior to COVID-19, ACN–USA’s advocacy may have been paying off.

Bucking the trend of yearly decrease, 27 percent of US Catholics now perceive their local bishop to be “very engaged” on the issue of Christian persecution. It was 24 percent in 2019.

Similarly, the perception of their local parish’s engagement rose to 22 percent, from 19 percent the year before. (Perception of Pope Francis’ engagement dropped slightly, from 51 percent to 47 percent.)

“It is not a dramatic increase,” said Joop Koopman, ACN–USA communications director.

“But the awareness spread through church communications means there has been a little more noise.”

Yet a little less impact.

Though 7 in 10 Catholics said prayer was a “very important” personal initiative to help the persecuted church, other indicators fell.

These are the same tools preferred by the US Catholic community.

ACN–USA’s question on what should be done to deter the persecution of Christians around the world also reflects a slight decline from 2019 figures.

First among the “very important” responses was diplomatic pressure at 55 percent, down from 61 percent.

Economic sanctions ranked second at 53 percent, down from 56 percent.

Emergency asylum (52%) and financial aid (48%) remained roughly stable, while military intervention rose to 46 percent, up from 42 percent in 2019.

The least favored response was to arm local Christian communities, where the “very important” percentage held steady (40% vs. 41%).

In a separate survey of 2,055 registered voters (1,223 of whom were Catholic) conducted in November by Real Clear Politics in partnership with EWTN, the biggest Catholic-themed cable television network, “religious freedom” commanded less attention among Catholics than the population at large.

Yet 7 in 10 Catholics agreed that America as a nation was becoming “less tolerant” of religion in general. And by a margin of 2 to 1, registered Catholic voters (62% vs. 31%) wanted Christian values to play a more important role in society.

“It may well be the case that domestic issues take precedence over global issues,” said Koopman, “given our very polarized political landscape.”

But given the importance of international religious freedom, Clancy expressed hope that the uproar over Trump’s visit earlier this month to the Saint John Paul II National Shrine would not drown out the message.

The president had announced an executive order to make IRF issues more central in the State Department’s formation of foreign policy. But coinciding with widespread protests following the police killing of George Floyd, the Catholic archbishop of DC slammed the hijacking of the revered pope’s legacy.

“I hope it does not become divisive,” said Clancy.

“The optics and politics of it are just a side issue.”

And since racial justice and COVID-19 have completely consumed American attention, he said, ACN–USA has turned its attention to another of its core priorities—helping the suffering church around the world care for its poor.

They just may face an uphill battle reminding American Catholics.

“In a world where up to 300 million Christians are confronted with various forms of harassment and outright persecution because of their faith,” said Marlin, “the US church simply must do more to inform and galvanize the faithful.”