From cleanup efforts to sermons against systemic racism, local pastors say an effective response requires they listen to the communities hurting the most.
Daniel Silliman
June 02, 2020 11:10 AM 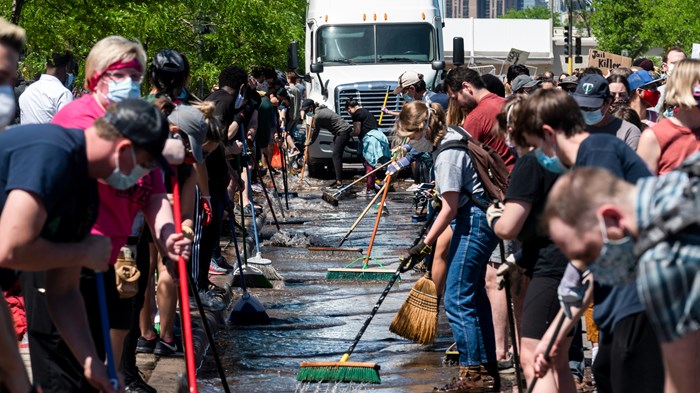 Dozens of evangelical churches are joining together to help Minneapolis as protests against racism and police violence rock the city and destructive riots devastate minority neighborhoods.

In the week after the death of George Floyd, local evangelicals have participated in the citywide response, donating food and supplies and rallying volunteers for cleanup efforts. But as church leaders consider the long-term needs that will continue when the news cycle and national attention move on, they’ve realized how important it is to work together to coordinate their responses.

“People want to just do something, but that doesn’t mean we know what to do,” said Shawna Boren, the engagement pastor at Woodland Hills Church in St. Paul. “We’re really trying to be effective by listening to the churches in the neighborhoods that are affected and doing what they tell us to do.”

Boren was one of more than 250 ministers who joined a Zoom call on Monday to discuss ways that churches can collaborate. The call was organized by Transform Minnesota, an evangelical organization that brings pastors together to wrestle with social issues.

The church leaders heard about specific community needs, like baby formula and hand sanitizer. They shared their exhaustion after months of dealing with the impacts of COVID-19. They talked about best practices for helping clean up after a riot, like checking in with community leaders before showing up in a neighborhood with a van full of people. And they discussed concerns about how helping could hurt.

Bethlehem Baptist Church, where John Piper served as pastor for more than 30 years, is focusing its response on local grocery stores that have been destroyed or forced to close because of the protests. The church wants to meet the immediate needs of hungry people while supporting these businesses and ultimately improving the community’s food distribution system.

Ming-Jinn Tong, a neighborhood outreach pastor at Bethlehem’s downtown campus, outlined a tentative three-step process. Right now, the church is setting up emergency “pop up” grocery stores and providing direct deliveries to people who need food. Next come plans—still being developed—to bail out the local grocery stores, buying their new inventory and distributing the food from a temporary farmers market while teams of carpenters fix up the buildings so the businesses can reopen.

“The question is, ‘Are we scratching where it doesn’t itch?’” Tong asked the pastors Monday. “The situation is always changing—the implications of what has happened and the implications of the ongoing injustices. So we must have an attitude of listening, learning, and then leading.”

The city’s current crisis may forge new relationships among evangelical churches, according to Carl Nelson, director of Transform Minnesota. Founded in the 1960s as the Greater Minneapolis Association of Evangelicals, the group initially focused on organizing prayer. It now puts on leadership conferences for 300–400 churches a year and works to connect ministers and help them develop relationships. The response to the protests is built on individual relationships, he said, like those that grew out of the organization’s civil rights trips.

The “sankofa journeys” take small groups of black and white pastors to landmark sites in Atlanta, Birmingham, Selma, and Memphis. They are expensive and time consuming, but also effective at preparing pastors to work together to address racism, Nelson said.

“In the white evangelical churches, it has created some courageous willpower to say ‘We’re going to press into this,’ even in the face of congregations that sometimes think concern about racism is just a progressive agenda, or even Marxism,” Nelson said. “I’ve seen the churches in the last week build on that existing action and start coming together to say that we have to invest in the institutions that represent communities of color, the communities that were most impacted by the violence and, before that, by the underlying ideological issues that allowed the death of George Floyd to take place.”

On Monday, the ministers also talked about the need to address racism in evangelical churches and the importance of using this moment to spur change in white people. Pastors in the area said they rewrote their sermons last week to address Floyd’s death and the ongoing issues of systemic racism.

At Hope Church, in the suburb of Oakdale, Clay Edens preached about the need to lament racial brokenness, confess racism, and listen and learn from black voices. The congregation prayed in silence for eight minutes and 46 seconds, believed to be the amount of time a Minneapolis police officer put his knee on Floyd’s neck despite Floyd’s pleas that he couldn’t breathe.

“I’m not someone to consistently allow the news to dictate what I preach from the pulpit, but this felt different,” Edens told Christianity Today. “There’s definitely a movement of the Spirit here to open up our eyes to the racism both in our own hearts and in the systems of our country.”

At Woodland Hills, senior pastor Greg Boyd rewrote his sermon as well. He told the pastors gathered on the Monday Zoom call that he was convicted that racism is the responsibility of the white church. If white Christians had loved like Jesus loved, he said, they could have stopped slavery before it began, squelched the Ku Klux Klan, and prevented the laws that instituted racial segregation in America.

“It’s on us,” he said. “And for white folks, the security and familiarity and privilege of the way things have been will lull you to sleep if you don’t have ongoing familiarity with black and brown brothers and sisters in Christ.”

The Minneapolis pastors are hopeful that this new cooperation and coordination will meet the needs of the city in its moment of crisis, but also mark a change for the evangelicals in the area.

“It has to be a turning point. It has to,” Nelson said. “There have to be enough of us in the church to say we’re going in a different direction. We can’t battle our way through this just to return to normal.”