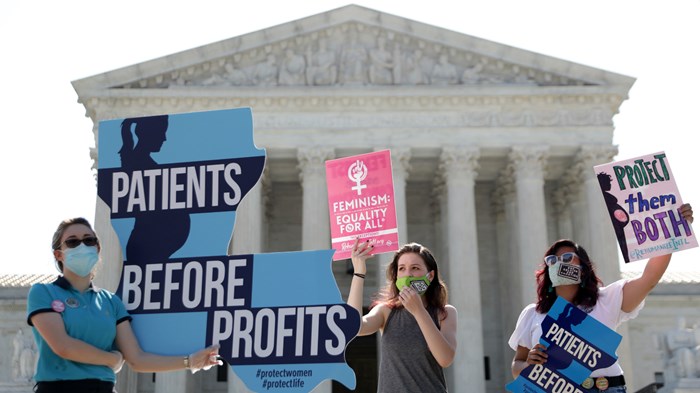 The Louisiana law required abortion providers to obtain admitting privileges at a local hospital. Legislators said the requirement would improve the level of care that clinics provide for women. The court struck down similar requirements in Texas in 2016, ruling that the regulation would have no positive effect on the level of treatment women received but would likely cause some clinics to close. The regulation was unconstitutional because it would place an “undue burden” on women’s access to abortion.

On Monday, four liberal justices—Stephen Breyer, Ruth Bader Ginsberg, Sonya Sotomayor, and Elena Kagan—decided in June Medical Services vs. Russo that the Louisiana law was unconstitutional for the same reasons.

“Enforcing the admitting-privileges requirement would drastically reduce the number and geographic distribution of abortion providers, making it impossible for many women to obtain a safe, legal abortion in the State and imposing substantial obstacles on those who could,” wrote Stephen Breyer, for the majority.

Chief Justice John Roberts joined the decision in a concurring opinion. Even though he said the Texas decision was wrong, he thinks the precedent is binding. Roberts appealed to the legal doctrine of stare decisis, a Latin phrase meaning “to stand by things decided.”

“Stare decisis requires us, absent special circumstances, to treat like cases alike,” Roberts wrote. “The Louisiana law imposes a burden on access to abortion just as severe as that imposed by the Texas law, for the same reasons. Therefore Louisiana’s law cannot stand under our precedents.”

The legal argument did not please pro-life advocates.

“Chief Justice Roberts’ vote is a big disappointment,” said James Bopp Jr., general counsel for National Right to Life. “This decision demonstrates how difficult it is to drain the DC swamp and how important it is that President Trump gets re-elected so that he may be able to appoint more pro-life Justices.”

Louisiana—like many conservative states—has passed numerous laws regulating abortion in the last few years. Most abortions are banned after 22 weeks. Every woman seeking abortion is required to get an ultrasound and receive in-person counseling. And girls under 18 are required to get parental consent.

The state has seen a 2 percent drop in abortions since 2016, continuing a nation-wide trend. In the state’s four clinics, there is currently about currently about 1 abortion per 100 reproductive-age women every year.

The Louisiana clinics do not have a good record of caring for women’s health. A lower court—which sided with the abortion providers—described the clinics’ disregard for basic levels of medical care as “horrifying.”

In one case, a doctor did not sterilize the instruments used to perform an abortion. The same doctor used single-use instruments multiple times, court records show. In another case, a women started to hemorrhage during her abortion. The doctor didn’t try to stop the bleeding, according to disciplinary records, but instead told her to “get up and get out.”

June Medical Services, the clinic at the center of the Supreme Court case, was cited for failing to monitor breathing and heartbeats while women were under anesthesia. Its doctors also didn’t check medical histories and performed abortions without documenting anything about prior complications with anesthesia, or issues with menstruation, pregnancy, and childbirth, according to the lower court’s findings.

Pro-choice advocates argued that requiring doctors who perform abortions to maintain admitting privileges at local hospitals will not improve the level of care. Sometimes hospitals evaluate a doctor’s qualifications and record, but admitting privileges can also be denied for bureaucratic reasons that have nothing to do with the quality of care a patient receives. Functionally, they argue, the requirement will only prevent some abortion doctors from working in Louisiana.

Justice Samuel Alito, in his dissent to Monday’s ruling, argued that “there is ample evidence in the record showing that admitting privileges help to protect the health of women by ensuring that physicians who perform abortions meet a higher standard of competence than is shown by the mere possession of a license to practice.”

Alito also argued the ruling shifts the standard for regulations in favor of abortion providers, allowing them to say what counts as an undue burden.

There has been much debate about what regulations are “substantial obstacles” since the court established that standard in 1992 with Planned Parenthood vs. Casey. Many abortion rights advocates see all regulations as an undue burden. They argue the state laws are just back-door attempts to ban abortion.

During oral arguments, the attorney representing June Medical Services said that even if there was no evidence that the Louisiana law made it harder for a woman to get an abortion, the regulation should not be allowed unless it was shown it made a positive impact on women’s health.

Pro-life groups, on the other hand, have argued a state law should be allowed unless it prevents all or nearly all abortions from occurring. In a friend-of-the-court brief, Bopp argued that regulations are not substantial obstacles until they rise to the level of “absolute obstacles” and when a law incidentally increases the cost or decrease the availability of abortion that is not “undue as a matter of law.” He suggested the court clarify its standard, to say that a regulation is permissible unless it deprives women of abortion access “in a real sense” or is clearly “designed to strike at the right itself.”

Justice Clarence Thomas, in his dissent, said the debates about what regulations are acceptable do not go to the heart of the matter.

“Today’s decision is wrong for a far simpler reason,” he wrote. “The Constitution does not constrain the States’ ability to regulate or even prohibit abortion. This Court created the right to abortion based on an amorphous, unwritten right to privacy, which it grounded in the ‘legal fiction’ of substantive due process … the putative right to abortion is a creation that should be undone.”

The case has been seen by many as a proxy battle over abortion, despite the fact that the legal status of abortion wasn’t at issue and abortions would continue to happen, regardless of the court’s ruling.

The Billy Graham Evangelistic Association filed a brief with the court arguing the 14th Amendment’s guarantee of the right to legal due process should protect the unborn. “It is now well known that a unique human being, a person, begins life at conception,” the association’s lawyer wrote to the court. “That has been indisputably established scientifically since the early 1800s.”

On the other side, the representative for 28 pro-choice religious groups including the Methodist Federation for Social Action, Presbyterians Affirming Reproductive Choice, and the United Church of Christ, took the opportunity to argue for the importance of abortion access.

“Being forced to carry an unwanted pregnancy to term not only exposes a woman to greater health risks, but is also an affront to her right to decide whether to terminate a pregnancy, in accordance with her faith and values,” the lawyer wrote. “Religious commitments to the marginalized in our society, including poor women, women of color, rural women, young women, women in abusive relationships, and women unable to travel to obtain abortion care, add to these concerns.”

The court’s ruling does not address the personhood of the unborn, though. Nor did it challenge the question of a women’s right to access abortion.

At least one justice wonders whether any Supreme Court decision could get at the real issue dividing the nation and address the deep ideological conflict over abortion.

“I have read the briefs. I understand there are good arguments on both sides,” Breyer said during oral arguments in March. “Indeed, in the country people have very strong feelings and a lot of people morally think it’s wrong and a lot of people morally think the opposite is wrong. … I think personally the court is struggling with the problem of what kind of rule of law do you have in a country that contains both sorts of people.”