The Museum of the Bible displays 16 fragments of the Dead Sea Scrolls—and all of which are fake, according to an independent analysis contracted by the museum. The forgeries will remain on display, with an updated exhibit that attempts to use the embarrassing situation as an educational opportunity.

The Museum of the Bible purchased the forged fragments in four different lots from four different antiquities dealers between 2009 and 2014. The Dead Sea Scrolls were one of most important discoveries in biblical archaeology in the 20th century. It was felt that a museum dedicated to the history of the Bible had to have examples of them, if they were available.

The ancient scrolls were discovered by Bedouins in 1947. A cobbler in Bethlehem named Khalil Eskander Shahin and known as Kando served as an intermediary between the Bedouins and the institutions that wanted to buy them. The Kando family kept some of the fragments, as an investment.

When a number of scroll fragments began to come on the market in 2002, some were directly connected to the Kando family, and few questions were raised about their authenticity. Before the Bible museum opened, however, a group of scholars examined the fragments while writing a book about the Dead Sea Scrolls. Questions began to surface about five of the 16.

When the museum opened, the Dead Sea Scrolls were displayed with signs acknowledging the questions about their authenticity. 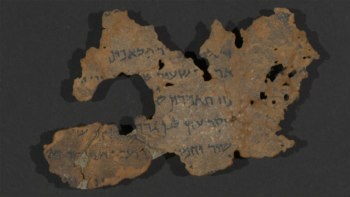 Steve Green, president of Hobby Lobby and chairman of the Museum of the Bible, was also fined $3 million and forced to return 5,500 ancient cuneiform tablets and seals in 2017, after a federal investigation determined they were from war-torn Iraq and not Turkey or Israel as customs forms had claimed.

Faced with some strong criticism and increased suspicion about the museum’s exhibits, the organization decided to hire an outside firm to independently examine all 16 of the Dead Sea Scrolls fragments. The Museum of the Bible contracted with Colette Loll, of Art Fraud Insights, who specializes in detecting forged artwork. Loll assembled a team of experts and launched a nine-month investigation.

The investigation revealed that most of the fragments were leather, rather than the parchment typical of the Dead Sea Scrolls. To the naked eye the materials look very similar. Under a microscope, the difference was obvious. More evidence of forgery mounted.

“We saw things like ink waterfalling off the edges, ink going into cracks, ink going over thick surface deposits,” she said. That would mean that when the text was written “this material was already decomposing,” Loll said, which provided more physical evidence of forgery.

When the experts finished, Loll’s team had no trouble drawing a conclusion.

“After an exhaustive review of all the imaging and scientific analysis results, it is the unanimous conclusion of the advisory team that none of the textual fragments in the Museum of the Bible’s Dead Sea Scroll collection are authentic. Moreover, each exhibits characteristics that suggest they are deliberate forgeries created in the 20th century with the intent to mimic authentic Dead Sea Scroll fragments.”

The investigative report, which was paid for by the museum and is now available on the museum’s website, includes videos and images which will help people understand the forgery.

The museum hosted an academic symposium on March 13 to report the results of the investigation. A panel of Dead Sea Scrolls scholars were responded, including Christopher Rollston, professor of Semitic languages at George Washington University; Sidnie White Crawford, professor emerita of Hebrew Bible and Second Temple Judiasm at the University of Nebraska-Lincoln; and Lawrence Schiffman, professor of Judaic studies at New York University. All three praised the museum. Even though the fragments were one of the museum’s most prized possession, it did the right thing, funding an investigation and publicizing the results.

“They didn't have to fund these tests,” Rollston told CT. “Many other museums have not come clean like this. I think the museum deserves some credit for that.”

The three scholars also called for an inquiry into the fake artifacts, to figure out who perpetrated the fraud. “We need a full-scale criminal investigation,” Schiffman said.

Rollston hopes an investigative journalist will go to work on the scandal and find the perpetrator. He suspects it may be someone he knows, someone in the community of Dead Sea Scrolls experts, a trained scholar who perverted professional expertise to engage in criminal activity.

“I believe forgers do great harm to the field,” he said. “They prey on the hopes and desires of good people. I would love to see this person exposed and prosecuted.”

Other Scroll Fragments may be Suspect

There are about 70 other Dead Sea Scrolls fragments in other collections around the world that may be forgeries as well. The Museum of the Bible is encouraging the owners of those fragments to launch their own investigations.

“We hope to set a benchmark here for other collections and hopefully uncover the truth about all of these fragments,” Kloha said. “The ultimate goal is to have the truth and to be able to present it accurately and make it available to the world.”

He added: “We’ve learned a lot more about how forgers go about their methods. We have also learned that documentation from dealers can’t always be trusted.”

The news of the fakes may have damaged the credibility of the museum, but Rollston said he would not hesitate to visit with family members and friends who come to Washington, DC. “The serious blunders of the museum, these breeches of ethics and law, are part of the past,” he said.

Rollston recommends visiting the Israel Antiquities Authority room on the sixth floor, one of the largest exhibits of material excavated in Israel on display outside of Israel. And the changes that are coming in its Dead Sea Scrolls exhibit will make the museum even better.

“It will be really fabulous to put together an exhibit focusing on modern forgeries,” Rollston said. “It’s a useful thing for the public, a way to make lemonade out of lemons.”